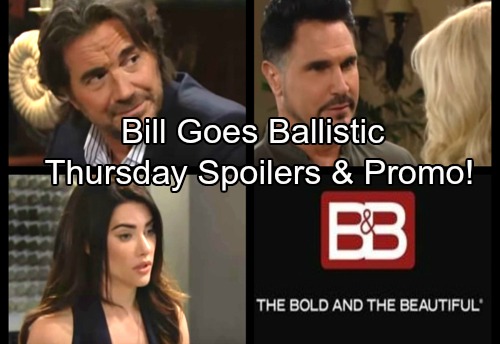 The Bold and the Beautiful (B&B) spoilers for Thursday, October 12, tease that Bill (Don Diamont) will hope for a change of heart. Brooke (Katherine Kelly Lang) has had some time to mull over her future and she’s reached a conclusion. She’s ready to let Bill know if there’s still a chance for them as a couple.

Bill will beg Brooke to put her ring back on and stay married to him. He’ll reiterate that he regrets setting all this in motion and causing Brooke distress. Bill would take back his ruthless actions if he could. He’ll promise that Brooke means more to him than anything in this world.

Unfortunately, Brooke just won’t be willing to forgive Bill and rebuild their marriage. She’ll insist that they should go ahead and get the divorce started. Brooke won’t see any reason to drag their feet. It sounds like she’ll be certain that this is the end of the road.

Other Bold and the Beautiful spoilers say Ridge (Thorsten Kaye) will feel confident about winning Brooke over. He’ll think having Bill out of the way will make things a lot easier. Ridge will contend that Brooke and Bill were never a realistic pair. He might argue that Brooke has always been too good for Bill, but B&B fans may or may not agree!

Meanwhile, Steffy (Jacqueline MacInnes Wood) will have another tense chat with Liam (Scott Clifton). She’ll try to get Liam to see this from Bill’s point of view. Of course, Liam won’t care about Bill’s perspective. He just knows Bill made horrible decisions and deserves to pay for them.

Later, The Bold and the Beautiful spoilers state that Bill will march over to Spencer Publications. After Brooke’s announcement, he’ll be filled with rage. Bill will want Liam to know that payback is coming and it’s going to be the worst pain he’s ever experienced. Liam won’t be afraid, but maybe he should be. It seems like Bill’s never been quite so angry before.

Steffy will do her best to restore peace, but she might as well give up. Bill and Liam won’t be repairing the damage anytime soon. We’ll give you updates as other B&B news comes in. Stay tuned to the CBS soap and don’t forget to check CDL often for the latest Bold and the Beautiful spoilers, updates and news.