The Bold and the Beautiful Spoilers: Wednesday, November 15 – Passionate Kissing Leads to Bill and Steffy Hookup

BY Heather Hughes on November 14, 2017 | Comments: one comment
Related : Soap Opera, Spoiler, Television, The Bold and the Beautiful 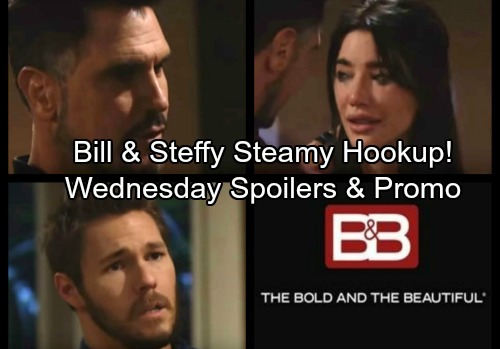 The Bold and the Beautiful (B&B) spoilers for Wednesday, November 15, tease that Bill (Don Diamont) will pull Steffy (Jacqueline MacInnes Wood) close and insist that she deserves a real man. He’ll think Steffy should be with someone who treasures her and respects her opinion. Bill won’t think Liam (Scott Clifton) has ever realized how special Steffy is.

Steffy will continue to fret over Liam’s betrayal and the mess she’s facing. She knew he was getting too close to Sally (Courtney Hope), but she still thought she could count on his loyalty. Steffy will feel like she couldn’t give Liam what he needed.

Bill will maintain that Liam is the only one who should be held responsible. He’ll console Steffy as she worries about her crumbling marriage. The Bold and the Beautiful spoilers say sparks will fly as comfort turns to irresistible desires. Bill and Steffy will gaze into each other’s eyes before kissing passionately. It won’t be long until the make-out session turns into a hot hookup.

Steffy and Bill will get caught up in this electrifying moment. They won’t consider the fallout their actions will inevitably bring. The regrets will come later, but they’ll focus on the steamy sex for now. B&B fans won’t want to miss these shocking scenes.

Meanwhile, Wyatt (Darin Brooks) will also blame Liam for everything he’s dealing with. He’ll point out that Liam was told to steer clear of Sally, but the rescue ranger wouldn’t listen. Liam just had to step up and help, but his mission cost him big time.

Liam nearly lost his life and now Steffy won’t return his calls. Nevertheless, Liam will vow to fight for the woman he loves. He’ll be convinced that if he grovels hard enough, he can make this right. Of course, Liam isn’t aware of the latest developments. Sally and Liam’s kiss seems insignificant when Steffy’s busy banging her father-in-law.