The Bold and the Beautiful Spoilers: Week of September 25 – Wyatt Spies On Sally and Liam – Eric Forgives Ridge

BY Heather Hughes on September 21, 2017 | Comments: 11 comments
Related : Soap Opera, Television, The Bold and the Beautiful 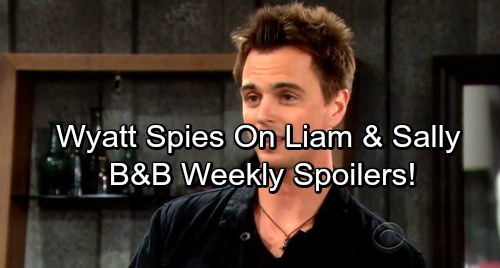 The Bold and the Beautiful (B&B) spoilers for the week of September 25 to 29 tease that we’ll see some intense determination. Several characters will do anything to accomplish their goals. First, Liam (Scott Clifton) will continue his Spencer Publications revamp. Bill (Don Diamont) was all about profit, but Liam would rather treat his employees right and do some good in the world.

Of course, Spencer is still a business and that means they need to make money. Liam’s efforts to produce change will definitely come at a price. Will that price prove too steep for Liam and the company he took over? Time will tell, but there are major risks here.

Meanwhile, Steffy (Jacqueline MacInnes Wood) will grow increasingly frustrated with her husband. She’ll realize that Liam’s changes will only provoke Bill’s wrath. Steffy will keep trying to mend fences, but she may have to surrender at some point.

Other Bold and the Beautiful spoilers say Wyatt (Darin Brooks) will do some detective work. After making a connection between Sally (Courtney Hope) and Liam, Wyatt will hope to find out what they’re up to. He’ll do whatever it takes to figure out the nature of their business arrangement. Wyatt will be on a mission to show Liam what he’s made of. This brother battle is heating up!

As Wyatt digs for answers, Brooke (Katherine Kelly Lang) will have a decision to make. After a series of frantic pleas from Bill, Brooke will weigh her options. She can give Bill another shot, kick him to the curb or reunite with a probation condition. No matter what Brooke decides, Ridge (Thorsten Kaye) won’t let her forget he’s an alternative.

Speaking of Ridge, he’ll get a pleasant surprise in the week ahead. The Bold and the Beautiful spoilers state that Eric (John McCook) will soften toward the son he disowned. Since Eric has forgiven Quinn (Rena Sofer), maybe Ridge deserves his father’s mercy as well. Eric and Ridge won’t entirely patch things up, but they’ll start moving in that direction.

Ridge will be thrilled when Eric relaxes a little. He’d love the chance to form a strong bond again. It’ll take a while to repair the damage, but B&B spoilers say Ridge will have high hopes. However, Sheila (Kimberlin) will pose a threat to the happiness of the Forrester clan. Her sneakiness will lead to more trouble before long.

Will Quinn turn the tables or is she completely doomed? Will Sheila make some crucial mistakes or is she the master of manipulation? We’ll give you updates as other B&B news comes in. Stay tuned to the CBS soap and don’t forget to check CDL often for the latest Bold and the Beautiful spoilers, updates and news.