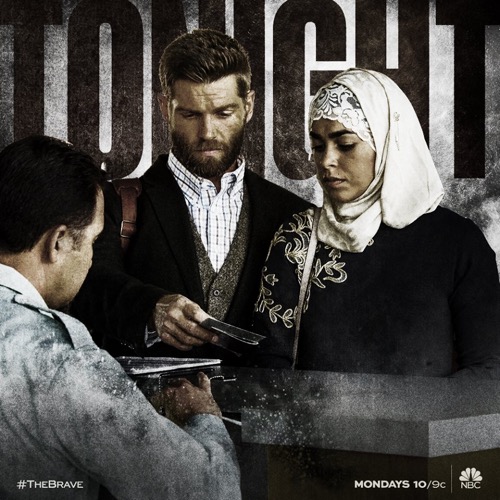 Tonight on NBC their new military drama The Brave airs with an all-new Monday, November 20, 2017, episode and we have your The Brave recap below.  On tonight’s The Brave season 1 episode 9 as per the NBC synopsis, “When an undocumented drone crashes on the border of Mongolia, the team is forced to investigate the old school way. Meanwhile, a stunning realization takes place in the D.I.A.”

So makes sure to come back to spot between 10 PM and 11 PM ET for our The Brave recap.  While you wait for the recap make sure to check out all our television recaps, spoilers, news, videos and more, right here!

Tonight’s The Brave recap begins now – Refresh Page often to get the most current updates!

Rainer Booth’s intel proved to be true. He had correctly identified the man responsible for the recent bombing of the US military base and, more importantly, he accidentally revealed said information to the Americans. But the people in Washington had had to discuss what to do with Fahim Jarif. He had, after all, met the criteria for lethal action because he had posed as a current and ongoing threat to the United States of America, however, taking him out couldn’t be done by drone. So Campbell had to sign off on sending Dalton’s team to Iran to kill Jarif despite the risk and together they planned everything to the last detail.

The team was sent to Iran and given little more than two hours to complete the mission. But if they made mistake or were captured then Washington would be forced to disavow them. So they all followed Jarif the second they landed. They knew what time he had breakfast and where he went to go take tea, but there were certain things they couldn’t account for. Jarif hadn’t taken his seat by the window and so Jaz had to go up an additional set of steps to get a shot at him. And then when she did get the shot, she hadn’t been able to make it because a kid crossed his path right at that exact moment.

But missing that shot hadn’t just been bad for Jaz. It had put the whole mission at risk and so everyone thought they would have to give up yet there later turned out to be a second opportunity to get to Jarif when they noticed the woman he had been meeting with had actually been the sister of the terrorist they had also been looking for. So Dalton and the others had tried to follow the Aida to see if they could get anything out of her and unfortunately they had been seen. The woman in question had noticed she was being followed and had escaped into an empty high rise where she could commit suicide before getting captured.

So their last chance quickly blew up. But with nothing else they could do, they had intel checked to see if they had been seen and were planning their escape route when another chance fell into their lap. They still had Aida’s phone in their possession and Jarif had texted her because he hadn’t known she was dead. So the team decided to use the phone. They waited for Jarif to make contact and then had Jaz pretend to be Aida when they answered though she had to put on a Lebanese accent for the phone call before she eventually agreed to meet with Jarif and so Washington double-checked to see if the two had ever met each other before giving the green light.

Jarif had never met Aida and had thought Jaz’s voice sounded remarkably like the female terrorist. But they also scrubbed Aida’s digital footprint and had swapped a picture of Aida with Jaz. So Jaz was asked if she wanted to go through with it and she had been more than adamant when she said she was. She had been on the beach that day when they were attacked and so she knew that they had gotten lucky that day, but she didn’t want anyone else have to go through that and had done everything she was asked. She had sat down for tactical makeup and had learned what she needed to do with the drug meant for Jarif.

Jarif was supposed to ingest drug that would make it look like he had a heart attack. But Jaz had been told that she couldn’t be in the vicinity once Jarif had taken a drug or his men would move to detain her with little chance of anyone else ever seeing her again. So Jaz had gone in knowing all of this and had been doing well with the charade when her supposed brother called. The terrorist had wanted to check in and see how things were progressing with Jarif however Jarif became suspicious of Jaz when she didn’t want to talk to her brother and so Jaz had to improvise. She had moved to detain Jarif before he could raise the alarm and had killed him without anyone on his side knowing.

Her team on the other hand had had to listen to the fight and how it ended. But were then in a position to improvise an escape for Jaz. Jaz couldn’t be caught by the Iranian Special Forces that were acting as Jarif’s personal guards and so the team asked her to take the stairs. They had put men in both stairwell that could assist her if she needed them and so she just had to walk calmly to the steps, but unfortunately the guards had put her on the elevator and so Jarif’s men found out something was wrong before she could even make it to the lobby. So her team had to get off the elevator midway and criss cross the hotel.

She would take the steps here and then walk to the other stairwell to take the steps there. But she was running out of time with all those counter-maneuvers. So she was going to make a run for it through one of the windows and was almost there when she got grabbed by the Iranians.