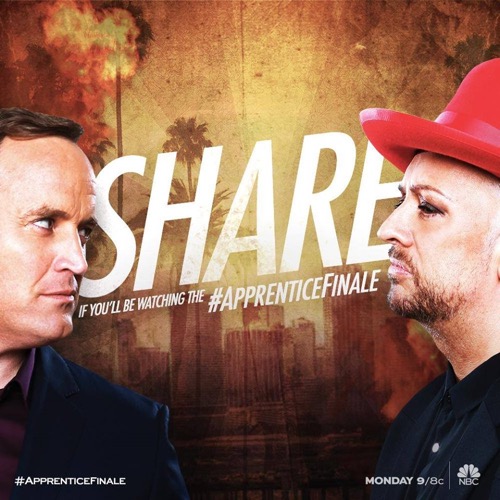 The New Celebrity Apprentice season 15 episode 7 as per the NBC synopsis, “The two finalists continue a task from Carnival Corporation by preparing an ad campaign, hosting a party and producing a show. Later, the Governor names the winner. The season finale features music performances and guests, including Caitlyn Jenner.”

The show airs tonight from 9PM – 10PM and you do not want to miss all the drama, cat fights and fighting. You also do not want to miss seeing who is fired and who will eventually be crowned the winner. So don’t forget to come back to this spot for our The Celebrity Apprentice recap. While you wait for our recap make sure to check out all our TCA recaps, pics, photos, spoilers & more, right here!

Tonight’s The Celebrity Apprentice recap begins now – Refresh Page often to get the most current updates!

The New Celebrity Apprentice season 15 FINALE begins with Boy George informs his team that he fired the keyboardist because he was getting on his nerves, trying to tell him how to change his own personal song.

George admits it is a stressful and he doesn’t have time for anyone’s ego but his own. He says the music world is his world and he knows about attitudes and what the wrong attitude can bring to a situation; the new keyboardist arrives and he is thrilled to have someone he knows.

The celebrities take pictures for the paparazzi and Matt Iseman says everything that happened this season all comes down to this. He goes inside with his team of Carnie Wilson, Kyle Richards and Carrie Keagan, there are ice sculptures, poker table, photo booth and live animals. He liked Boy George’s space but didn’t see anything that would draw people in.

Carson Kressley is on Boy George’s team but says he is having kangaroo envy and cheers for the opposing team: Team Matt. Matt and Boy George shake hands, offer their congratulations, admitting they are both excited to see what the other brings. Matt asks to sing with Boy George who says no; Matt felt he entered the competition as an underdog but now that he is in the finale with an icon like Boy George he feels whoever wins, they both come out as winners.

Boy George is upset that Matt is shouting so much. He is bringing in a lot of money. Matt set a goal, and has already blown past it. Carson reassures Boy George by telling him that many people suffer from arthritis, so of course Matt and his team would raise a lot of money for it.

Boy George is waiting for Caitlyn Jenner and all the cast from I Am Cait. He is panicking that she isn’t there yet and he is desperate for the money. He feels that Caitlyn is the star of the night. Caitlyn tells him besides the charity, she wanted to come celebrate Boy George’s 8 years of sobriety; sharing how proud she is of him.

Governor Arnold Schwarzenegger. his nephew Patrick, Tyra Banks and Arnold Donald arrive with the presidents of the four different cruise lines. Boy George’s team just let them walk in where Matt came to greet them and handed them individual passports for their “trip”.

Team Matt is up first and Matt does a great job impersonating the Governor, he shares his pictures of the cruise, then reveals his own personal story of rheumatoid arthritis, you could see the tears in Arnold’s eyes. Kyle and Carrie arrive on stage to announce Wilson Phillips singing “Hold On”; everyone was standing, clapping and singing along. Matt feels he did everything he could and no matter what, he already won.

Carson Kressley begins for Boy George’s team; he shares their photos and wants to debunk all the cruise myths. He then introduces Boy George to entertain the crowd. Arnold is already on his feet. Boy George tells everyone that a cruise is essentially how you feel and the word for the Princess Cruise line is JOY, which made him think.

Matt says that Boy George is a prolific song writer and he played to his strength the whole competition. When George is done singing his “Joy” song, he introduces the crowd to Natasha Bedingfield who sings “A Pocketful of Sunshine”; then Boy George returns to sings Culture Club’s “Karma Chameleon” and everyone is dancing, including Governor Arnold Schwazenegger. He admits this is his favorite performance ever.

In the boardroom, Team Matt and Team Boy George meet with Governor Arnold Schwarzenegger, Patrick Schwarzenegger and Tyra Banks. Governor tells them he knows a lot about competition as he has been competing his whole life; he praises them saying they both have shown incredible competitive spirit, and he was blown away by their performances and speeches.

Matt says his team impressed him to no end. They absolutely threw themselves into the task and supported him any way possible. He was elated and tells them he owns them a huge debt. Carnie says Matt is gracious and humble, yet strong and smart. Kyle says Matt is an incredible leader; very calm, cool and collective. She doesn’t know how he did it, but it was impressive. She admits they were so proud to be Team Matt.

Governor jokes about how shocked Sylvestor Stallone was to get hustled by Carrie for money for Matt’s charity. Carrie says Matt didn’t need to convince her to do anything because he is the greatest guy who truly cares about his charity.

Boy George knew Carson would be the best for the ad campaign and excelled at it. The women he asked to do the room and Porsha dealt with the photo details. He feels everyone did a great job.

Porsha says George was a great project manager, he knows exactly what he wants and he is going to make sure that happens; always voicing his opinion. Carson says they were fortunate to have an artist as their leader because no one is better at conjuring emotions than an artist and musician. He feels they sold the campaign by taking everyone on an emotional journey, showing exactly what a cruise is.

Laila says it was great working with George. She knew what he brought to the table since he bought her on the last task and got her fired by singing and emotion, so she knew it would be a great show. George admits that Carson suggested Natasha Bedingfield and Patrick says she was amazing; the he says both teams had incredible lineups. Tyra says they both wanted to make her go on a cruise.

Tyra says she was touched that Matt shared his personal story with rheumatoid arthritis, and by making himself vulnerable he only made himself more beautiful.

Tyra says Carnival was very impressed with Boy George’s presentation, the party was on point and the photos were phenomenal. They loved that his variety show stayed on the theme of emoting cruising. They felt the performance was absolutely amazing.

Patrick says the executives felt Matt’s performance was super engaging and super fun. They loved the party and the animals they organized. They thought the passport was a great special touch. Overall they felt he stayed on theme and were very, very pleased.

Boy George raised $445,925 and Matt raised $573,329; Patrick jokes,”so much for you can’t fundraise!” as everyone claps. Arnold and Patrick say there was over a million dollars raised between them and that is incredible. Boy George and Matt shake hands for a job well done. The helpers leave to enjoy themselves as George and Matt are left to find out who wins.

Both Matt and Boy George are congratulated and told how proud he is of them. Governor says he has a very difficult decision to make. Matt doesn’t think there is anyone who has worked harder than him consistently through the competition. He has refused to be afraid of failure. He knows to be a leader and organizer when needed and to bring the best out of people; to make them feel passionate about a project. He is very proud he passed his impossible goal for funds for his charity.

Boy George says he learned he does have a good business head and he can be a team player. He has learned he can dig deep and go out of his comfort zone. He feels inside that he has already won, in the sense he doesn’t feel a great loss. He is proud of what he has done.

“Matt, you are the new celebrity apprentice. Congratulations!”

So Matt Iseman is who won The New Celebrity Apprentice!