The Celebrity Apprentice Recap 1/16/17: Season 15 Episode 3 “Candy for a Billionaire” 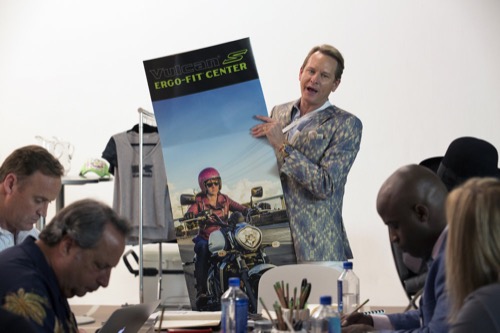 The show airs tonight from 8PM – 10PM and you do not want to miss all the drama, cat fights and fighting. You also do not want to miss seeing who is fired and who will eventually be crowned the winner. So don’t forget to come back to this spot for our The Celebrity Apprentice recap. While you wait for our recap make sure to check out all our TCA recaps, pics, photos, spoilers & more, right here!

Tonight’s The Celebrity Apprentice recap begins now – Refresh Page often to get the most current updates!

Kyle is the project manager for Prima and Carson is for Arete. Patrick will be a boardroom adviser along with Gemma Godfrey. She tells them to pay attention in the executive briefing so they know exactly what they want. They are told the winning project manager gets $25 thousand for their charity.

Both teams are off to a good start coming up with great ideas, but now the men are getting very artsy and edgy, planning to do a nude photo shoot and using a drag queen; the men are conflicted on their decision. Boy George tells Carson he has to be completely naked or the shot doesn’t work. Jon Lovitz jokes that they need purell.

Kyle and the Prima team are focusing more on women riders, couple riders. Kyle seems to step back on her own ideas because her last two ideas failed the team. Brooke calls her husband David Charvet to come in for a photo shoot. The women continue with the strong, sexy women but executives are concerned how creative it will be. David is worried he will look wimpy if he is on the back of the bike. He doesn’t trust her riding.

The Prima team is up first for their presentation, in the end, David was the one who rode the bike with Brooke in the back. Arete is ready to present and Carson is making the executives laugh, really showing that anyone could ride their bike. Gemma tells Patrick that maybe the Arete team took it too far.

The celebrities arrive in the boardroom. Kyle feels they had beautiful amazing shots that spoke to their campaign. Brooke admits her husband refused to sit on the back of the bike. Carson is very happy with their campaign believing the executives loved it. Chael admits he was worried about going too far but Boy George defends their decisions.

Patrick tells the men the executives loved their creativity, thinking outside the box. Carson was very knowledgeable about the brand and very entertaining. On the negative, he may have pushed the envelope too much because it would raise eyebrows with their core enthusiasts.

Gemma tells the women they nailed the showcasing, and made the bike very approachable. They didn’t push the envelope and the executives would have preferred if David was on the back of the bike. The photos were amazing but too safe.

Team Arete wins again. Carson’s charity is the True Colors Fund which is to get LGTB youth off the streets and into safe homes. He gets $25,000 for his charity; because the campaign was so close, Kyle will also get $25,000 for her charity, The Children’s Hospital of Los Angeles. The men are sent to their war room to have some drinks.

Arnold Schwarzenegger said they should have worked with their strengths, admitting that he would have sat on the back of the bike. Brooke takes responsibility for the photo with David. Kyle picks Brooke and Porsha to come back with her, the rest of the team can join the men.

Patrick brings up that Kyle is the one at fault, this is the third time she is responsible for her team losing. Gemma feels Brooke lacks accountability. Kyle thinks Brooke should be fired. Porsha says Kyle should be fired. Kyle once again says it is Brooke who should go home. Kyle is told that she was the reason their team lost, she says her team must think she is a strong person and a great leader.

Arnold tells her she only fell short by a little bit but Kyle is terminated and ordered to go to the chopper. He says this is the 4th time the women have lost and now its time to mix up the teams.

Brooke and Lisa have been the only two women who haven’t been project managers. Some of the men joke that the women are slow with learning things. Vince, Chael and Carson join Lisa and Porsha, while Brooke and Laila join Jon, Boy George, Matt and Ricky.

They are outside LA City Hall, where they are met with executives to See’s Candies. Their task is to create, name and patent, See’s Celebrity Candy. They need to call on their celebrity friends, after they create the candy they will sell it in a See’s Candy store. The winner of this task will be the team that makes the most money.

Patrick and Gemma will be boardroom advisers. Once they have created their candy, one member from each team will fly to Omaha, Nebraska to the offices of Warren Buffett. He will conduct a taste test, and the winner of the taste test wins $25,000 bonus from See’s Candy. Vince is the project manager for Prima and Ricky Williams for the Arete team. The project manager of the winning team will win all the money raised for both teams.

While the Prima team is already collecting money, the Arete team is working on quality of their candy. Jon gets very defensive when team members don’t like his flavor. Ricky tries to get Jon away from the team because he is a distraction, so he tells him to go to Omaha for the team. Brooke is upset and worried that Ricky isn’t going to be able to deliver.

Carson is the one choosing the flavor and wrapping. Vince is fine with it because he is busy raising money. They decide to do a snack Warren Buffett already likes and change it by one ingredient. Chael is the one chosen to go to Omaha.

In Omaha both Chael and Jon like each others candy, both worried about the bonus because it could be the difference between winning or losing. Warren Buffett informs them he will call Arnold Schwarzenegger with the winner.

The Arete team arrive at the candy store, and scramble to get everything in order to open the store. Using social media a lot of people showed up but Brooke is concerned they are not getting any big checks. Matt keeps his faith in Ricky, but admits that pot smokers are not really a reliable bunch.

The Prima team is off to a slow start, but strippers begin to show up for Vince Neil; all his people are coming in and giving a lot of money; even Kyle Richards shows up to support Porsha. PK and Dorit from Real Housewives of Beverly Hills show up with $80,000 for Boy George.

In the boardroom, Arnold says there were two tasks today, to create the candy and to sell the most. Lisa says Vince was a great project manager and they were very efficient. Brooke and Ricky bet each other, and he didn’t raise the money he thought he would. Boy George was the top winner on their team.

Arnold says the teams were very close, team Arete raised $365,745.00. Prima raised $378,535.00. Warren Buffett says Vince’s team Prima won. His charity of Keep Memory Alive not only won the $400 thousand plus, they also won the money from Arete totally $769,000.00. The Prima team is asked to go back to the war room while the Arete team has to stay for someone to be fired.

Ricky is told he fell short and the taste was good but Warren Buffett is known to love dark chocolate and brittle, and they should have known that if they did the research. Jon Lovitz only raised $500.00 and Arnold is not impressed. Boy George over achieved and says Jon is the reason they lost. Laila doesn’t think she should be fired either.

Ricky chooses Jon and Laila to come back with him. Ricky says Jon should be fired because he didn’t raise very much money. Laila agrees. Arnold says that its easy to pile it on Jon but Ricky was the one who fell short for his money. Jon says Laila’s chocolate was fantastic and he was shocked she didn’t win.

Arnold tells Jon Lovitz he is terminated and orders him to get to the chopper. He says it was a good thing that Jon was really bad because Ricky was very close to going home. Patrick tells him it was the right call.