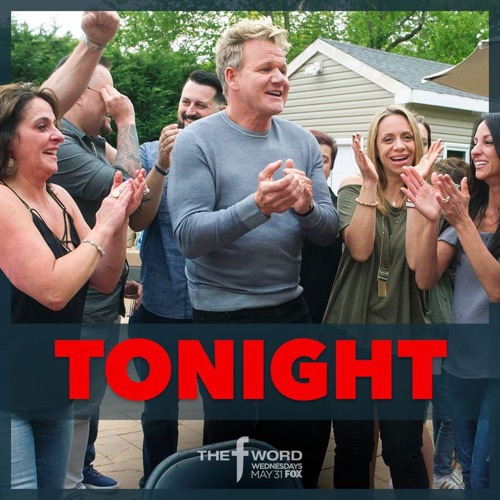 The F Word begins with Gordon Ramsay introducing us to his newest restaurant where there are two teams of amateur cooks in the kitchen, who have never done this; they are all doing it live and Gordon asks what could possibly go wrong? He says The F Word stands for FOOD, FAMILY, and FUN! He tells fans to expect to see him like you have never see him before, in disguises. Amateur team from across the country will go head-to-head in his restaurant.

Tonight it is the Spice Boys versus the Sexy Paesons, where they will be cooking a beautiful spiced Alaskan Salmon plus he will be pranking a former head chef; then he will serve up an awesome dish for Kevin Spacey and join two friends live, Jamie Foxx and Snoop Dogg as The F Word is open for business. The rules are simple, half the restaurant will be served by one team while the other is served with team two, whomever does the best in pleasing the diners wins.

Melissa, Christine, Dawn, and Rob are the Sicilian family members from New York who make up the team Sexy Paesans. He calls them together in the kitchen, telling them they are an amazing family. Melissa is the Team Captain, Dawn is her right-hand, Christine is on potatoes and Rob is the flavor town! He tells them to bring their passion on their plates.

Spice Boys are friends from Tennessee who loved cooking from a young age. They are second generation Indians born in the United States, their food reflects their heritage. Roshan is Team Captain, Sanket, Hemel, and Hitesh are prepared to kick the Sexy Paesans butts.

Charity Johnson is the bartender who serves Gordon and Jamie Foxx, they talk about his new FOX series starting tomorrow called BEAT SHAZAM. Gordon congratulates him on the new film he is in with Kevin Spacey called Baby Driver. Foxx shares that his guilty pleasure is pizza and desserts like chocolate cream pie and tiramisu; he jokes that he is a ghetto cook and Ramsay says it sounds disgusting. Jamie Foxx makes a great impression of Ramsay as they take us to break again.

Chef Gordon Ramsay comes into the kitchen and tells the teams to use utensils and not their fingers as the maitre d, Kayla comes and says the Spice Boys are serving raw meat and dishes not up to Ramsay’s standards. He tells them not to rush, the salmon is cold which is raw, not rare. He tells them if they are not sure, to taste one; he’d rather waste one being eaten than still swimming in the water.

Chef Ramsay tells Melissa from the Sexy Paesans that they have served 22 dishes already and are going well but she needs to stop doing do much and start to delegate. She smiles when he tells her to have a good time and she tells him she’s got this.

In his own kitchen at home, Chef Gordon Ramsay shows us how to make spiced Alaskan Salmon, with smashed potatoes and succotash and how to beautifully plate it and top it with a squeeze of lemon juice. He has posted the video on how to make it and asked people to show their results.

The first picture he says is disgusting and get that fish back into the water and the second dish looks like someone missed out on connect four and should be ashamed of himself. The next photo is of a goldfish cracker on a little pile of rice with poopoo on the side; everyone laughs as it gets a D for dunce. He jokes about Andy Cohen’s dish saying he should stick to bringing love together while he cooks. He says he will post each week, so be sure to follow him.

Ramsay sits down with his son, Jack and daughter, Megan as they joke that Jack was about to serve his friends raw kabobs the night before. He asks him if he watches him and Jack says, “Not really!” He tells Jack to watch and learn and this show is going to give him things he hasn’t been able to do.

Ramsay travels to New York City to become someone else; his former head chef Maria is now works for the Institute of Culinary Education and has recently sent him a letter for him to show her students some culinary skills. He is coming but in disguise when he arrives in he class room they are introduced to a chef Ramsay who claims he isn’t related to Gordon.

He introduces himself as James Thompson and he is a retired teacher who wants to learn to cook. He begins to show his skills and some students have begun to notice but his cover isn’t blown yet. He is head of the class but no one knows why. He isn’t sure how to pass this all off on Maria.

Chef Ramsay goes to see how things are going. He calls Dawn and Melissa over saying its team work and Melissa needs to let go a bit. He says they have started out strong but needs to be sure they are want to win this. He tells Dawn she seems a bit out of it and needs to get with it.

Gordon Ramsay comes to meet with Snoop Dogg and his kids. Snoop says he was a chef before this show and Gordon congratulates him on the new album; impressed that he never left music and this is his 15th album. Snoop Dogg talks about the youth football league he participates in and says its one of the most important things in his life as he is able to give back to kids and finds it encouraging to see those kids make something of themselves. Snoop’s daughter Cori is following his footsteps in music as Gordon’s daughter is following him in cooking too. He promises his food is better than Martha Stewart’s.

Gordon rushes through the kitchen and meets a couple who are on their first date, both agreeing its been unreal, the chemistry is there, but she shakes her head no. Ramsay jokes for them to slow down. He tells the guy to describe her in one word and he says inquisitive; when he asks her she says lovely. Gordon tells them to enjoy the food and to give her a kiss.

The kitchens are busy and the diners are deciding if their dishes were good enough to pay for. The Sexy Paesans have served 30 dishes and the Spice Boys have done 34 dishes. He calls the Spice Boys together, saying he sees a lot of individuality but not enough team work. He wants to see the passion even though its not a race; he wants to taste the passion he tasted when he met them.

Gordon rejoins Snoop and his children but as he is describing his dish, Gordon jokes that he is sounding like a food critic now. He asks what his go-to food is and he tells Gordon it is cereal and some milk; saying there is nothing wrong with that DOG. He gives them thumbs up and says the food is amazing.

We go back to NYC where Gordon is ready to prank former head chef Maria. One of the older students asks if Gordon Ramsay is mean and she admits he was a little. She says in the kitchen there is a level of expectancy and you knew what he expected of you and if you produced what he exactly wanted, you would be in his good graces forever. Gordon is glad he had taught her something.

Still pretending to be James he approaches the older woman who says Maria gets down and dirty and wonders if Gordon Ramsay is really as mean as he is on television. He tells her that he is a dick.

Maria is teaching them how to separate a whole chicken; he failed at trying to be class clown and now wants to see if she recognizes his cutting skills. She tells him Gordon Ramsay would be proud of his work. He starts a fire on the grill and she right away chastises him; he feels they are eye to eye and has successfully fooled her. He tells her Gordon Ramsay would never forget the chicken oysters and says, “Hi Maria, how are you darling?”

She is in utter shock as he says she hasn’t lost her touch; he tells everyone he is really Gordon Ramsay and the older student apologizes for calling him mean. She had no clue, so mission was accomplished.

They are sitting in the F word restaurant and she describes how creepy he was in that disguise. He tells her she was a great sport but she will never be able to live this down. He asks about the amateurs and she says they look calm and composed; before she leaves, he reminds her to not forget the oysters.

Gordon welcomes everyone back as the kitchen is about to close, the Sexy Paesans served 32 dishes as the Spice Boys have served 39 dishes; now its time for Chef Gordon Ramsay to taste the dishes. The room decides tonight’s winner but at the end of the season Gordon Ramsay will choose the two teams to compete for $100,000.

Gordon goes to visit actor Kevin Spacey where they will play food court tennis. The rules are whatever Kevin hits in protein, starch and veg; Gordon is going to have to cook, good or bad.

Swordfish, couscous and asparagus are the ingredients and its time for him to cook. Kevin asks if he is going to yell at him while he cooks; but Gordon says Kevin is an excellent deliverer of the F word. They joke about the F word and how Gordon says it, believing its just misconstrued.

Kevin says Gordon is good in the kitchen but on the court he sucks the big wadoobah. Kevin uses his Bill Clinton accent and says he is going to eat the food while Gordon can screw off; Gordon says this is the first time he has been told that at a barbecue.

The night is done and we are about to find out if the diners would pay for the dishes they were served. Gordon says Rob deserves a medal for having to deal with all 3 women; he tells the Spice Boys it was a slow start, but strong middle and end. Kayla delivers the results for opening night with amazing feedback. 43% approval rating for one team and 68% for the other team; announcing the Sexy Paesans as the winners of the night.