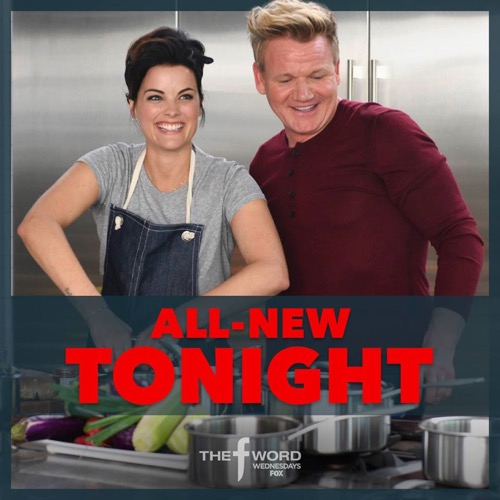 Chef Gordon Ramsay welcomes us to The F Word Restaurant where two teams will be battling it out. Team Lords of the Lake and Team Miracle in the Kitchen will be competing while cooking fried chicken with collard greens.

Each team will feed 50 diners each and the diners will vote on whether they are willing to pay, whoever gets the most votes wins the chance to compete in the grand finale for $100,000. Tonight’s special guests are Joe Manganiello and Rachel Bilson.

Team Lords of the Lake are four friends from Michigan who bonded over lakeside living and their love of cooking. Brian is the leader, John is Mr. reliable, Mike is the prankster and Patrick is the oldest who loves to grill. These four love to throw a party but can they work together when the pressure is on? Brian is the team captain and says everyone can work each station; Wendy Webster is their sous chef for the evening.

Team Miracle in the Kitchen is the Jones family, Casey Jones was one of the survives of the “Miracle on the Hudson” plane crash. Judy is his wife, who is fun loving and pays attention to detail, his daughter Cailin is the jokester and her husband Alex who is an over achiever who is looking to pull his weight in the kitchen. Casey is the team captain and Ben Kronick is their sous chef.

Chef Ramsay shows audiences how to make the buttermilk fried chicken, the yam hash and the collard greens. He ties a bunch of rosemary together and uses it as a brush. The competition is on, who will win tonight? Gordon Ramsay and Jamie Alexander go a recipe challenge and Jones is back as he goes under cover to see what people really think of him.

Ramsay gets some early feedback, for Lords of the Lake out of their first 10 dishes, 5 said they would pay. For Team Miracle in the Kitchen, 10 out of 10 diners said they would pay: a first in The F Word Live. Can they keep up the momentum? He tells them to keep it up but tells the Lords of the Lake that they need to season it more and less garnish.
Jamie Alexander challenges Gordon to a cook off. She is making a vegetarian taco, he is disappointed that she is not making something like a rib eye, she jokes asking if he wanted to make “bangers and mash?” He says she doesn’t look like a vegetarian and insists she used to eat steak. She admits it but pulls a knife on him and he retreats to his corner. She calls him a punk when he attempts to distract her. She hates that he is so good at what he does and threatens to sniff pepper and sneeze in his dish so he can’t serve it.

Three of the F Word staff come in to taste and decide who has made the better taco. Jamie is nervous but they decide 2-1 for Jamie’s taco. He squats down all depressed saying he isn’t good at losing and jokes he might cry.

Since the Fourth of July is coming, they are going to attempt a new Guinness World Record title for the fastest dicing of a huge watermelon. He meets with Matt Jones who is trying to beat the world record in the restaurant. He is pretty confident, he has to do it under 25 seconds. The judge is there, as millions watch; he has a clean cut and diced the watermelon in 18.1 seconds.

Lords of the Lake has served 26 dishes, but only 10 would pay. They are told the chicken is bland and has inconsistent breading. Miracle in the Kitchen has served 32 dishes and 21 of them are happy to pay. He reminds them its not a race and to be consistent and check the seasoning.

Gordon Ramsay returns as his alter ego “James”. He is going to join a focus group, so he works to change his voice so not to ruin his cover. They start the conversation about the F word. When asked what they think of Gordon Ramsay, one says he loves when he throws a plate of food at a chef who did a poor job while another calls him a bastard. One woman calls him a jerk by making people cry. Another likes him but maybe he couldn’t yell at people so much. Gordon says they are all wimps; one man leans over and thinks James is Gordon Ramsay.

Joe Manganiello sits with Gordon on the balcony, and he asks Joe what is that sneaky dish he has that no one knows about. He says chicken and waffles is his go-to dish. He shares that he has strict diets depending on the role. His guilty pleasure is jelly beans. Chef Ramsay is from Great Britain with comfort food that have bizarre names and tonight he is going to educate everyone on them.

Under the dome they have the Scottish dish called Haggis with neeps and tatties. Joe thinks Haggis is a fish, Gordon laughs saying its the sheep’s livers and kidneys bound in a sort of bag and steamed. Joe is to try three dishes and pick a card of what he thinks it is.

He picks spotted dick first and loved it. The second dish is bubble & squeak. The last dish is toad in a hole but he thought it was Cullen skink; because he got one wrong he has to taste the haggis saying it tasted like a steak and kidney pie.

Miracle in the Kitchen is starting to dwindle, raw chicken is coming back and its under seasoned. Lords of the Lake learn they have got this and to stay focused. They are not back and learn their opponents are not listening to his advise.
Back at the focus group did James blow his cover? He didn’t blow his cover when the woman tells the guy she doesn’t think so. One woman says Gordon Ramsay is the best and she is literally in love with him. Everyone likes him and when asked if they think he is sexy almost everyone says no but one of the men says he would have sex with him! They all have an opportunity to do their own impression of Gordon Ramsay. He busts them all by revealing who he is and welcomes them to The F Word.

Gordon joins Rachel Bilson and her friends at the ice cream bar. He asks her what her comfort food and she says ice cream; she shares that she loves to bake as well. They are going to have a little fun to see how many scoops they can have on a cone. Joe arrives to be the score keeper, they have 45 seconds to do it. Gordon got five scoops and dumps it on a customer’s head.

Chef Gordon Ramsay is presented with dishes from both kitchens. He tells Brian from Lords of the Lake that they are having a nice comeback. Now that they are focused, they are producing strong dishes. Casey from Miracle in the Kitchen says their opponents’ dish has a nice presentation and Brian hopes in the last 15-20 minutes they can pull through with a strong finish.

Gordon announces the kitchen is closed, impressed with the comeback; but who will be the next team on the winner’s wall? The results are in with one team 26 out of 50 would pay and 29 out of 50 would pay for the other team. The winning team tonight is Miracle in the Kitchen, who managed to make a comeback from their bump midway through service.