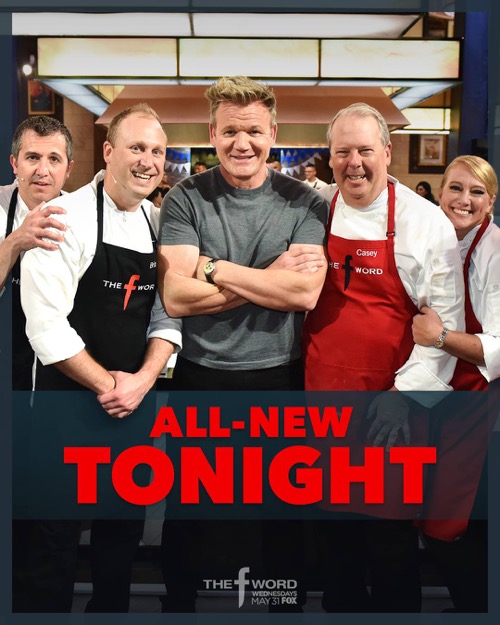 The F Word with Gordon Ramsay begins tonight with Seoul Food from San Francisco and the Italian Stallions from Boston. Tonight’s menu is English Fish & Chips but there will be a twist as each team is allowed to put their own spin on the dish but will it help them or hurt them. The teams have to serve 50 diners who decide if they would pay for the dish or not.

Sue is the captain of the Seoul Food team with Danny, Euni and Merix; Merix is only 14 years old and Chef Gordon Ramsay congratulates him but they promise to bring it tonight. Kenny is the captain of the Italian Stallions team along with Louis, Dom and Matt; all of them are cousins who say if the food isn’t good enough for their mother it isn’t good enough for the diners. Ben Kronick is their sous chef and Whitney Webster is the sous chef for the Seoul Food kitchen.

The teams learn 24 hours before they go live that they are the first teams on the series to be able to alter the dish. They work hard to create a dish that will make them stand out, but some worry it will make them or break them; stressing about their decisions.

In the Seoul Food kitchen they modified the tartar sauce with Korean flavors and Merix decided to add sugar to the fries. In the Italian Stallion kitchen the twist they added was added black pepper and paprika into the batter; they also added Parmesan cheese to the fries. Chef Ramsay then shows us how to make his fish & chips in his home kitchen.

Gordon Ramsay introduces us to Cat Deeley, an actress and producer, known for So You Think You Can Dance. He wants to know what food is her “go to” food. She says her husband’s favorite dish is fish and chips. They are going to have a competition about who can stack and fill the champagne tower first, whoever loses has to bring the tower over to their spouses. Cat loses and they make a disaster dropping the filled glasses on the floor.

Gordon welcomes us back to The F Word Restaurant giving the teams their first feedback.. Seoul Food has served 10 dishes and 8 were willing to pay. The Italian Stallions have served 10 dishes and all 10 are happy to pay. He reminds them either team can win but one one family can go on the winners’ wall.

He is going to be a waiter in training from Baltimore. He wants to see what bad behavior he can pull pass his employees. He drops wine glasses, touches the food with his fingers as he serves the dish. He drinks wine from the tables and asks a woman if she should be eating that much meat. He gets his first reprimand but is about to get a whole lot worse. Steals bread from the customer’s plate, grates very expensive truffle, exceeding $300 worth. He put the staff through enough but is now after Christina. Christina notices right away that he put his thumb and complains about it; he mutters she is about to get a lot more riled up.

Gordon Ramsay is ready to attempt another world record with Chef Hiroyuki Tereda who has the Diaries of a Master Sushi Chef on YouTube. He will be trying to set a new world record of the most carrot slices in 30 seconds blindfolded. The number to beat is 50. He feels great and still has all 10 fingers, results will be announced shortly.

Did Chef Hiro set the record? He sliced the carrot 88 times with a few deductions, and receives his certificate. Gordon almost kissed him over the win.

Back in The F Word kitchen both teams are halfway through and getting another update. He loves their start now Seoul Food has served 16 dishes and 12 of them are happy to pay for it. Chef Ramsay tells Danny he needs to go a bit quicker. The Italian Stallions have served 26 dishes and 23 are willing to pay for it; they have the best start compared to any team that has competed so far. He tells them to stay consistent.

We go back to Las Vegas to see what Thomas has done to Christina. He goes to clear Christina’s table and spills the food onto one of the diners. He returns with a wine bottle and fills the man’s glass with half of the bottle. Christina tells the head waiter to put a leash on Thomas. Before he is cut off from the table he returns with a tray of glasses filled with ice water, he drops them all down Christina’s back. When she has no idea that it was him, he introduces himself and busts her!

Christina and the amazing Caesar team are at The F Word Restaurant. He laughs at how Christina was fuming but kept her cool. He admits he was peeing himself all day, excited to be there. He thanks them and says the next time they hear about Thomas from Baltimore, put him in the freezer.

Gordon reminds us that although the diners choose who wins tonight, he will be the one to decide which two winning teams will compete in the season finale. He calls the team captains over and tastes their dishes. Sue feels stressed but he reminds her they have plenty of time still.

The Seoul Food kitchen needs to drain their fish a little more and a tad more seasoning. The Italian Stallion team’s dish works and reminds them the magic number is 50 dishes and they are in the final stretch, he encourages them to get on.

Marlon Wayans is in the restaurant, but busy on his phone when Chef Gordon Ramsay approaches him. When he learns they are live, he waves and says “Hi Mom!” He talks about his new Netflix show called “Naked” so he is on a strict diet in case they need him naked. Marlon gets a little graphic about private body parts. Gordon learns his “go to” snack is green juice with olives and rice potato chips but if he wasn’t doing Naked he would love sweets like Red Velvet Cake.

They are going to play a game where Marlon is going to describe the food placed in front of him so Chef Ramsay behind the wall can guess what it is. The first thing is Dragon Fruit and he gets it quick but Marlon says he is cheating. The second item is a Geoduck. He has no idea what it is, saying it looks like a shark takes a poo with a shell on it; then its a clam vomiting. He gets what it is as Marlon yells at it. The third one is octopus, he is shrieking at it. There is one left it is Balet, he says it looks like a chicken had an abortion; Chef knows right away. Gordon thanks him for playing and Marlon reminds us of his new series Marlon coming on August 14 on NBC.

Gordon sits with the captains of each team that has won so far, thanks them for their input and for being there tonight. The big moment is finally here and Chef Ramsay announces the kitchen is closed.

Seoul Food is exhausted, saying it was so hard but they wouldn’t change their mind on the Southern and Korean heritage in their menu. He tells Merix he definitely has a future in the kitchen. The Italian Stallions gave it everything they had and hope for great results; they feel their mother and grandmother would be proud.

The results are in with one team having 29 out of 50 diners would be happy to pay, while the other had 38 out of 50 would be willing to pay. The winning team and 6th team on the wall is The Italian Stallions.