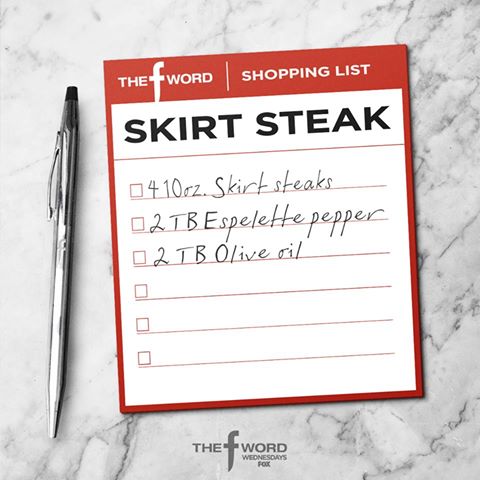 The F Word begins tonight with Gordon Ramsay introducing us to tonight’ teams – Licensed to Grill and Chop It Like It’s Hot and the protein they will be cooking is the amazing skirt steak. Tonight for the first time each team will have to find an element to make the dish uniquely their own.

Debbie is the Team Captain for Licensed to Grill, Amanda is on plating, Brad is on the beans and element they are creating and Jay is on the meat. She says what is special is they are always together; the kids still live under their roof after completing college and has been married to Jay for 27 years. Their sous chef is Whitney Webster.

Patty is the Team Captain for Chop It Like It’s Hot, her cousin Raul, her little brother Everado (Evie) and her cousin Lisette. Raul says they are a big energetic Mexican family who always get around grandma’s kitchen table. Their sous chef is Ben Kronick.

Both teams struggled on how to compliment the dish and make it their own. Debbie informs Chef Ramsay that the twist they did was the California-French twist, they are doing grilled Avocado and Pineapple salad. She wants to show their grilling techniques to everyone. Patty shows Chef Ramsay their variation is crispy quesadilla with creamy avocado drizzle.

Chef Ramsay takes us to his home kitchen and demonstrates how to make his skirt steak dish.

Lea Michele is at The F Word restaurant, they talk about how often they run into each other at restaurants. She jokes that she is a “pizza bagel”, saying she grew up in a big Italian family but now that she lives in Los Angeles she eats better. She talks about her new show called “The Mayor” which will air on ABC on Tuesday nights after Black-ish. She admits she is competitive and he wants to know how good her palate is, he decides to test her.

She is presented with 5 unique dishes and in 60 seconds she needs to match the cards with the flavor; with 20 seconds to go she is confident. She gets all 5 right and he is shocked she got that and compliments her on her amazing palate.

The Guinness World Record for tonight, they flew in Martina Servaty holds the record for the most juice extracted by treading grapes in 1 minute, which she achieved 6 years ago and tonight she will attempt to break her own record of 8.6 liters. She stomps quickly as grapes come flying out of the barrel; Gordon can’t stop laughing. Before we get results Gordon returns to the kitchen to give them their half-way report.

Licensed to Grill put out 34 dishes and 28 diners would pay, some say the steak was a little bit cold and too salty. Chop It Like It’s Hot served 32 dishes and 24 agreed to pay, the beans are slightly bland and under cooked. He tells them to change it up if they need to.

Gordon and his son Jack join on the hunt for the Burmese Python which are wiping out the native species and destroying the eco-system in the Florida Everglades. He makes a deal if they teach him and Jack how to catch them, he will show them how to cook them. After they are given a demonstration on how to capture a 6 footer, Gordon says his wife is going to kill him as they head into the everglades to catch ones ten times that size.

Jack finds one, but as he attempts to grab its tail it escapes, as they go through the swamp, Gordon realizes its much more dangerous than he initially thought as they now have to worry about alligators too. One of the hunters is bitten when they find one of the pythons; before we learn what happened we return to The F Word restaurant.

Gordon calls the team captains over to taste their dishes. Debbie shares that Amanda plated the dish for Licensed to Grill, the steak is glistening with a great sear. He says the dish is tasty, he loves the rustic taste and heat; he tells her they are doing a great job. Patty explains what is in the quesedilla, he says it is delicious, rich and creamy. He says since they have started the show he has never seen teams so close and can’t fault anything in the dishes; tells them to remain consistent.

Gordon then joins Adam Scott and his family in the dining room; they talk about Adam being a foodie. His wife shares that they cook daily, he says he likes to cook with his kids. Adam says he learned how to cook a steak from one of Gordon’s YouTube videos. Adam says he is very competitive and when Gordon asks if he is artistic, he says he isn’t as much as he’d like to be.

They are going to compete at a table of goodies, the goal is to plate an amazing dessert within 60 seconds; Lea Michele is the judge. Its a pastry chef’s dream. Gordon is making a beautiful dish while Adam and his son add all kinds of stuff into a bowl and torch it. Lea says its a good thing he is a good actor. He says it may not look pretty but he guarantees it will taste weird. Chef Ramsay made a strawberry shortcake, marinated with cherries and fresh cream. Lea chooses Adam’s bowl over the strawberry shortcake.

Back in the everglades, they catch the Burmese python and lucky for Kyle pythons don’t have lethal venom; they take the python they kill it instantly and without pain; he was 9 feet long. They skin the snake and because snakes contain high levels of Mercury you can’t eat them very often but Gordon demonstrates how to make a delicious meal of the snake.

Kyle Penniston and Jason Cataruneau, Python Hunters are in The F Word restaurant and explain how dangerous the snakes really are. They have a massive snake with them but he is a pet. He jokes that another one escaped inside the restaurant.

Gordon Ramsay announces the kitchen is closed and has the results of tonight’s dinner service. Kayla delivers the results to Gordon, for one team 30 out of 50 of their diners agreed to pay for their meal while the other had 40 out of 50 who would pay. The winner of tonight, and the 8th team on the winner’s wall is Licensed to Grill!