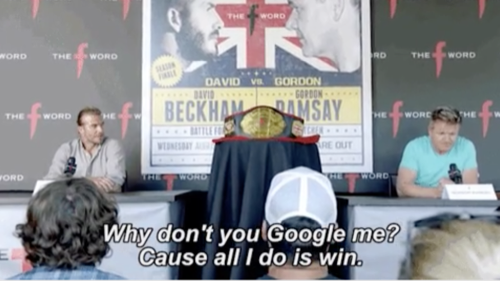 Tonight on the season FINALE of The F Word with Gordon Ramsay, Chef Gordon Ramsay arrives in the restaurant with the trophy for the winning team of the grand finale; they also will win $100,000. Week 7’s winners The Military Wives Club will compete against Week 1’s The Sexy Paesans and the dishes they will be cooking surf and turf; which requires perfect timing and they are allowed to put their own personal twist on it.

The Military Wives, Traci, Terri, Jessica and Leah are excited to compete in the finale and Jessica proudly announces that her husband, Lt. Colonel Michael Saddler is there, explaining their husbands deploy a lot so when they are with them they don’t take that time for granted. Their sous chef is Whitney Webster.

The Sexy Paesans, Melissa, Christine, Dawn and Rob are excited and pumped to be there. Gordon jokes that Melissa is still in his nightmares; Christine promises all their emotions and passion are in the dishes they are serving. Rob revealed that he promised Chef Gordon Ramsay if they won tonight he would allow Gordon to cut off his man bun. Their sous chef is Ben Kronick.

Chef Ramsay visits the Military Wives Club and their twist is they wanted to do a truffle mashed potatoes, which was Jessica’s idea; for vegetables they are doing a summer medley. When he visits the Sexy Paesans, their twist is creamy polenta with mascarpone and parmesan. He says its sounds amazing and tells them to focus.

Chef Gordon Ramsay then takes us to his home kitchen and creates his version of the surf and turf dish of beef and poached lobster, glazed carrots and potatoes in a cognac sauce and its done!

Gordon welcomes his friend and actress Eva Longoria; she asks why he isn’t in a chef’s outfit and jokes that he isn’t yelling at people tonight. She admits she cooks dinner at least 5 times a week but has gone out a lot with Gordon and Tana Ramsay. She says she grew up in the Gulf of Mexico so she grew up crabbing and fishing and now she’s in Texas so that’s the turf. She admits she will try anything but doesn’t like escargot.

They talk about her designing clothes for woman and congratulates her on their first anniversary. They talk about her experiences in the restaurant and he asks for her help; saying her challenge tonight is to open champagne bottles with a sword. He tells her to be very careful as she recommends people to back away from her. He explains how to do it 4 times, without smashing the bottle.

All night long, the winning teams from across the season are helping build the dessert for everyone in the restaurant. He goes to the kitchen to give them their early feedback. Military Wives’ truffle mash is loved, and from their first 10 diners 9 are willing to pay; its a solid start and are told to focus. Sexy Paesans’ creamy polenta is to die for and their first 10 diners, 9 are willing to pay.

Tonight Gordon says they have set 6 incredible Guinness World Records on the show and tonight there is one thing he hasn’t done this season is winning his own live on the show. He is going to attempt to set the record for the longest sheet of pasta, rolled in 60 seconds.

Michael Empric, the official Guinness World Record Adjudicator tells him he is looking for normal pasta dough, one solid sheet, no rips, holes or tears and the length he needs to beat is 3 feet 3.4 inches; Gordon flours and the count is on. He hops around like a kid when he measures it; the total length was 4 feet and 9 inches and he receives his world record then covers Michael in flour.

Tonight’s recipe challenge is the much hyped battle between soccer/footie super star David Beckham and world renowned Michelin star Chef Gordon Ramsay. They are going to be cooking risotto but before the battle can even begin, David wants the red plate over the blue one; joking that it will make it taste better. Gordon says the idea is for him to talk as much as he can to put David off from winning the coveted belt.

When David tries to talk to him, Gordon starts chopping loudly so he can’t hear him. David suggests he should bring his wife, Victoria Beckham on the show and tells Gordon that the fish he made her last week was slightly under cooked. He is upset about it. They joke through the whole competition and David feels his looks better than Gordon’s and Layla Ali is there to judge the dishes. She says it was a tough decision and chooses the blue plate which was Gordon’s; he hugs her and she put on the championship belt but tells David its okay, he still looks good.

Ramsay 1 Beckham 0 – and he cannot wait for the rematch.

Its time for Gordon to taste both team’s dishes. Traci from Military Wives comes and he says the plating is beautiful; Leah is plating and she is cooking the filet, seasoning as well as Terri as Terri and Jessica are poaching the lobster. She says she would pay for it while Melissa from Sexy Paesans says it looks a bit “dinerish”.

Melissa says she plated their beautiful dish, Dawn cooked the filet and everyone is in charge of the seasoning. He says the lobster is beautiful and when he asks Traci what she thinks of the plate she says the filet looked under cooked and she wouldn’t pay for it. He says this is the closest race by far, two incredible dishes, adapt and finish strong.

Gordon then joins the amazing Tony Hale who talk about this past week when Gordon Ramsay saw him and his daughter and sat in a tub and a bunch of kids were pouring ice cream on top of him making him into an incredible sundae. He jokes how Gordon made him look back to his daughter. Together they are working on creating a cake with frosting and candy.

They talk about doing a speech after winning an award. Tony doesn’t understand how people say they don’t do dessert. He says his go-to dessert is ice cream between two cookies, its a bit white trash but he likes it. Gordon places his piece on top of the cake and Tony lights a sparkler on his and puts it on the very top.

There are children who are dressed like like Gordon Ramsay and act like him, showing his vicious attitude. Then we are given reminds of some of the most extreme moments of the season including when he would trick people while in disguise. He officially closes the kitchen.

Kayla gives Gordon Ramsay the results of who won the first season ever of the United States version of The F Word With Gordon Ramsay. For one team 36 diners were willing to pay for dinner while the other team 38 were happy to pay for dinner. The winning team will win $100,000 and be crowned the first ever champions of The F Word and the winners are THE MILITARY WIVES CLUB!!!