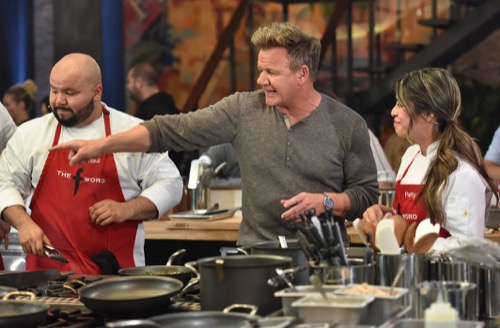 The F Word With Gordon Ramsay ‘Episode Nine’ begins tonight with Teams Sass and Class versus Papa Knows Best, they will be competing in the kitchen making Chef Gordon Ramsay’s famous chicken caccitore. Team Sass and Class is ran by team captain, Allison who is joined by her mother, MaryAnn, her brother Drew and sister Caroline; Drew is on the chicken, MaryAnn is on vegetables, Caroline is starch. Whitney Webster is their sous chef.

Team Papa Knows Best jokes that the father already cut his finger. Team Captain is Stephanie, she is joined by husband, Bob and son Greg and Jeanette. Bob says this is so important to him since he was cooking with his mom since he was 6 years old and she recently passed away. Ben Kronick is their sous chef.

The challenge this week is they both have 24 hours to add their own unique taste to make the dish their own. Chef Ramsay comes the Sass and Class team modified by using gnocchi in brown butter and sage sauce. He thinks its ambitious and learns that Allison was overruled when she wanted to risotto balls. She promises to change it up if it doesn’t work.

Papa Knows Best is modifying sofrito polenta with double fried plantains. She says they all agreed on the final product and wanted to bring their own flair to the dish. She is sure they will beat the gnocchi. Chef Gordon Ramsay takes the audience to his home kitchen and he makes his own version of the chicken caccitore.

Back in The F Word restaurant, Chef Ramsay walks over to Brad Garrett’s table, who introduces everyone at his table. He makes fun of Gordon saying he only has makeup people there but no one to do his hair. He congrats Brad Garrett on his Las Vegas show; he shouts for everyone to keep the sound down and use their inside voices. He jokes how bad the service is, that they have waited for 3 days for food now. He shares that his comfort food, saying he loves spicy food and anything Indian or Mexican.

There is a challenge coming up with Jalapeno Hot or Not Roulette. Brad gets a hot one while Gordon gets one that isn’t. Brad’s second number is hot and he accuses Gordon that he is doing this on purpose and Brad asks if its a ghost pepper. Gordon again has one that isn’t hot. Brad gets all 3 spins as HOT peppers.

The dinner service is nicely on a roll and Gordon has early feedback. He tells Sass and Class out of their first 10 diners, 8 are happy to pay for it. Papa Knows Best has served 10 diners and only 3 are happy to pay; the chicken is too dry and he tells Stephanie to not be afraid to switch it up and whoever is cooking the chicken needs to wake up.

Tonight’s Guinness Book of World Records is about getting the largest pizza base spun in under a minute. Joe Carlucci, owner of Joe’s World Famous Pizzeria, holds the Guinness World Record for the highest pizza toss and is determined to add this title to his collection. He arrives from Athens, Alabama at The F Word Restaurant. He needs to stretch a pizza dough over 42 centimeters in under 60 seconds, with no holes and usable. The judge reveals he had 72 centimeters and wins the new world record.

Gordon Ramsay returns to the kitchen with results of halfway through dinner service. Sass and Class has served 26 dishes and 20 agreed to pay, the chicken is under seasoned and he tells them to reign it in. Papa Knows Best has served 32 dishes and 22 are willing to pay, they are in the lead and shares they have regrouped and changed it up to give Bob a break. He reminds them only one of them can go on the Winner’s wall.

Gordon decides to go under cover in plain sight. He has hired an actor to make a documentary about Gordon Ramsay, himself. Everyone has a catch phrase and he jokes that if these people only knew he was hearing every word they were saying; people tore him down repeatedly choosing Jamie Oliver and Bobby Flay over Gordon Ramsay. The people are thrown for a loop when they see it is Gordon Ramsay holding the camera; he laughs at how people never notice the cameraman.

Gordon walks through the restaurant and welcomes Rob Riggle, asking how he stays so fit. He admits that he ate for comfort for a while and now is back in shape. They are sharing a drink as Rob says ice cream is his weakness; he doesn’t cook but he grills. They are bout to have a challenge, in their stall they are going to have a pasta challenge.

Rob is to listen to him as he guides him to make pasta. He tells Gordon he is going to fast as Gordon has already folded his pasta and Rob is still back at doing the egg wash on the pasta. Joe Carlucci joins Rob to make the pasta together as Gordon is already done making his.

Chef Ramsay calls Stephanie and Allison over to taste the dishes from each kitchen. Sass and Class’s dish is presented well and the chicken is beautiful. Stephanie says Jeanette plated and he said it looks beautiful. He encourages them both to finish strong as they share their feedback.

Gordon meets with super model Miranda Kerr in his home kitchen who challenged him to a cook off. They talk about the pressure of being s super model and remaining skinny. She says she eats 80% healthy and 20% indulgent. Gordon is frustrated that Miranda is able to cook so fast. He tastes the juice from her chicken and says its damn good. Three of the staff from The F Word Restaurant are there to do the blind taste test. They chose Gordon’s plate and Miranda says he would have been so sad if he lost. He says its refreshing to cook with a supermodel who loves to eat and cook.

Back in The F Word kitchen, Gordon announces the kitchen is closed after we are shown a little bit of the competitive spirit between sous chefs Whitney and Ben. Kayla brings the envelop to Chef Gordon Ramsay to see who will be the 9th team to join the winners’ wall.