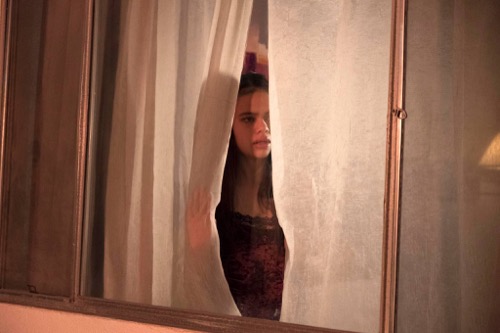 Tonight on Freeform their hit drama The Fosters returns with an all new Tuesday, July 11, season 5 episode 1 called, “Resist,” and we have your weekly The Fosters recap below. On tonight’s premiere episode as per the Freeform synopsis, “In the Season 5 premiere, Stef frantically searches for Callie after she offers to help Diamond; Jesus struggles with his TBI and unleashes his anger after discovering Brandon helped Emma with a deeply-personal decision; and protests continue over Anchor Beach Charter’s privatization, with Mariana leading the charge.”

The students of Anchor Beach were fighting pyritization. However, the school board thought that the privatization was the best thing for everyone. They knew that the school was facing low student turnout and wasn’t making enough money on its own without their former donors contributing anymore. So they thought that making the school private would allow it to stand on its own again, but the student body felt like they weren’t being considered in the school board’s decision. There were students that wouldn’t be able to afford school if it became private and so they were protesting the board until they were finally heard.

But the board didn’t want to listen to a bunch of students and parents chanting. They thought that protestors were a nuisance and had wanted to get rid of them yet their hands were tied because they couldn’t call the cops seeing as that would only attract the press. So Lena had instead tried to reason with people like her daughter Mariana. Mariana was one of the leaders and Lena had hoped she could convince her daughter that it would be safer for everyone involved if they just back down. And Mariana had told her mother that she couldn’t do that.

Mariana had reminded Lena that they had been promised a seat at the table and that the Board had shut them out before they could even speak up for their school. So Mariana didn’t want to back down and she didn’t care about the consequences or that her mother appeared genuinely scared. Yet, Lena was scared for a reason. She had overheard the others discussing what they should do with the protestors and Nick’s dad for one had advised that they used their security team to disperse the crowd.

So the situation in front of Anchor Beach was growing fraught and the family at the center of the drama was suffering as well. Mariana and Lena found themselves on opposite sides of the protest and as they had gotten so caught up with fighting about what to do for the school that no one noticed that Jesus was missing. Jesus had stormed off after he found out that Emma had been pregnant and had gotten an abortion all without telling him however the first place he thought to go was home and thankfully both Anna and Gabe had been there to stop him from tearing up his brother’s room.

Jesus had unfortunately blamed his problems on Brandon and so Gabe had to forcefully restrain him before he tore Brandon’s room apart. However, just before the two had seen Jesus in such a state, both Anna and Gabe had questioned their parts in their biological children’s lives. They thought that maybe they should stop trying seeing as the kids already have parents and didn’t need them anymore. So they were each discussing the best way to sever ties with Jesus and Mariana when it circumstances ended up proving that the twins do need them. Jesus needed someone to talk to that wasn’t his parents and Mariana needed to feel heard.

Mariana has been using twitter to get everything off her chest and that’s how the student body found out about Anchor Beach. But yelling into the void didn’t help Mariana and destroying Brandon’s room hadn’t helped Jesus. He had simply been out of control and Gabe hadn’t been sure whether or not he should allow Brandon anywhere near Jesus while Jesus was like that. So the twins did try to fight against the inevitable and it didn’t work in their favor. Jesus still had to listen to reason and accept his girlfriend hadn’t cheated with his brother meanwhile Mariana’s protests did get out of hand.

Mariana was blocking Nick’s dad from leaving and so he tried to push her yet Jude wouldn’t let anyone push his sister around and so he came to Mariana’s defense. Though the security guard mace Jude in the face and so that earned the school the press they were trying to avoid. So there was no winning and Lena figured out pretty soon that she was going to have a fight on her hands with this new administration. And so it turned out to be a good thing when Monty said she was going to fight her dismissal. The school needed as many as they could get to fight the Board from completely taking over.

Yet, while Lena had had a lot on her plate, Stef had been searching everywhere for Callie who disappeared with Diamond and her pimp. So when the girls managed to send a message to her with the address – she had been so relieved to find them! They had apparently hid in the bathroom after causing a fight between the pimp and his partner and so they stay in place until Stef got there and was able to take over. And it was their actions that truly led to the arrests of several men that would have go on to abuse girls if they hadn’t been stopped.

So Diamond got to go to a home that specifically dealt with girls that were coming out of the life and Callie got to go home with her mother as well as find out that she was off the hook with a previous hit and run. However, Stef had had to have a long conversation with Callie about her reckless actions because she wanted to know when Callie was finally going to start valuing her own life. The teenager has run into trouble since the day they meant and nothing Stef or Lena have said has ever made Callie to stop and think about things.

And so while Callie needs to think about where her life is going, Mariana ended up getting the one thing she wanted from Anna when she took her mother to therapy – acknowledgment of what happened. Anna had left her children filthy and starving for days on end because she was too busy trying to get drugs. So Mariana was finally getting heard and Jesus had come to see Brandon wasn’t a problem only to have Brandon hate him for what he did to his room.