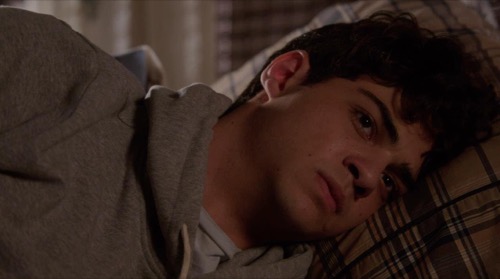 Tonight on Freeform their hit drama The Fosters returns with an all new Wednesday, February 21, season 4 episode 14 called, “Doors and Windows,” and we have your weekly The Fosters recap below. On tonight’s episode as per the Freeform synopsis, “Stef (Teri Polo) removes the kids’ bedroom doors after being fed up with their secrets; and Mariana begins seeing a therapist again. Meanwhile, Jesus starts physical therapy; and Callie’s (Maia Mitchell) biological father enlists his high-paid attorneys to take on her case.”

Jude hogs the bathroom in the morning making everyone late. Mariana doesn’t want to go to school because everyone knows she and Matt broke up. Everyone is tense. Jesus falls as he tries to climb the stairs to be with the rest of the family. Mariana asks Lisa if she is pregnant but she denies it. However, when Mariana leaves she looks worried.

Callie and Kyle meet and she tells him she may have a lead that might clear him. It is possible that Martha’s grandson Troy has something to do with her death. Jesus works in PT but gets frustrated and yells at Lena. Callie, Stef and Callie’s father meet with the lawyers who determine they will pay everyone involved in the accidents medical bills if they sign a statement for the judge saying they don’t want Callie to go to jail. It will cost $300,000 but Callie is upset because Troy Johnson will be paid also.

Robert tells Stef that a strange man has been bothering Sophia, he is concerned that because Callie and Sophia look so much alike it may have something to do with Callie. Stef thanks him for the information but based on Robert’s description of the man it seems Stef may know him but she doesn’t tell Robert. As soon as Robert leaves Stef immediately asks Callie if she broke into Doug Harvey’s house.

Callie admits she broke into Doug’s house but said she had no choice to try to clear Kyle. She is sure Troy killed Martha but has to be able to prove it. Jesus is working on exercises at home but again gets frustrated and lashes out at Lena. Mariana returns to therapy and recalls a difficult time in her childhood. Stef researches Troy online and then gets a call from captain Roberts. They agree to meet in the morning.

AJ, Aaron and Callie work on her senior project but it is obvious that AJ is jealous of Aaron. Brandon meets a music therapist while Jesus completes his PT. Stef speaks to Captain Roberts and she congratulates her on making detective. Stef will be in human trafficking. Stef leaves and runs into Detective Gray. She asks if he even considered Troy Johnson as a suspect in Martha’s murder.

Callie’s project is going well but AJ and Aaron continue to butt heads. Lena returns home to find Brandon, Emma and Jesus playing the piano and laughing. Brandon tells her he learned this could help rewire Jesus’ brain. Stef and Lena tell Callie that Stef reviewed all of the evidence and Troy did not kill Martha. His alibi is airtight. Callie needs to avoid the trial and let her dad pay the money. Callie says no but they insist.

Lena and Stef attend Mariana’s therapy session and learn that taking the doors off of the bedrooms was a bad idea and has caused Mariana to have significant issues. The therapist encourages them to work on regaining trust. Brandon hears Emma crying and she tells him she needs to tell Jesus that she is pregnant. Jesus works very hard to climb the steps and comes upon Brandon and Emma talking. He sees them leave the bedroom together and hears them agree not to tell Jesus.

Callie tells Kyle that Troy has an airtight alibi and she is not sure where else to turn. He is anger that Callie will get away with no charges because of her father’s money. Jesus is rude to Emma and tells her to leave. Stef lets Lena know that she made detective. The kids are thrilled to see their mom’s putting the doors back on the rooms. Everyone agrees they need trust and no more secrets. Callie finishes her project and shares it with Aaron. Jesus tries to read a card from a classmate but all the letters are jumbled and he cries.