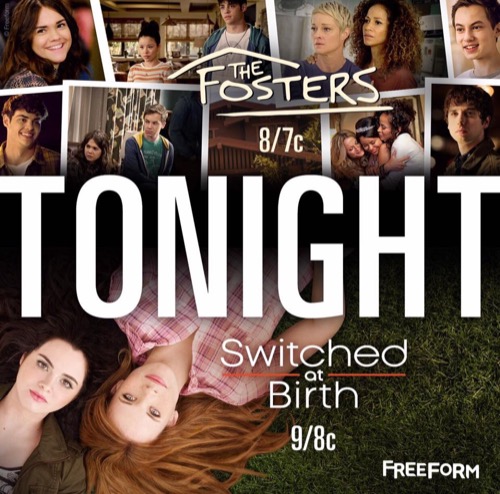 Tonight on Freeform their hit drama The Fosters returns with an all new Tuesday, February 7, season 4 episode 12 called, “Dream a Little Dream,” and we have your weekly The Fosters recap below. On tonight’s episode as per the Freeform synopsis, “Jesus (Noah Centineo) has a nightmare that he’s unable to save Mariana while he’s unconscious at the hospital. Meanwhile, Stef and Lena learn that Callie (Maia Mitchell) is in legal trouble; Mariana seeks comfort from Mat and Brandon tries to hold the family together.”

Jesus wakes sweaty from a dream. The hospital alarms are going off. No one is around. He calls out and doesn’t get an answer. He sees a younger version of Mariana on a staircase. She tells him to follow her. Stef and Lena are leaning over him as he dreams.

At the police station, Callie is still being questioned. Meanwhile, the rest of the kids are at home. Brandon suggest they clean. They ask Mariana about Nick. Jude asks if he is outside of their house, stalking them. Mariana calls him a pot head, he calls her a pill head.

Troy comes into the station with his lawyer. He lies to the police, blaming everything on Callie. Making her look erratic and out of control. Meanwhile, Callie is in the other room with the opposite story. Troy says that Callie caused the accident.

Mike brings a purp into the station. They ask him about Callie. Mike is mad that they are questioning her without Stef present. At the hospital, Lena is ready to break the news about Brandon and Julliard when Jesus’ machine begins beeping. The nurse tells them he has air in his line. They step out for coffee.

Mariana gets a text from Mat. He is in the shed. She meets him out there. They talk about Nick. She tells him she still loves him (Mat). She wants to have sex. He asks her if she is sure.

Callie signs the police statement without her moms. The officer looks pleased with himself. Lena asks the nurse if Jesus’ swelling has gone down. It hasn’t. He is still in a dream. He is looking for Lena in the house. She disappears. He sees Brandon making out with his girlfriend. She tells him he is too dumb for her. Deck the halls begins to play while he tries to find the young Mariana. She appears in the school hall and warns him – “don’t let him get you.” Its Nick in a santa suit with a bell that turns into a gun.

Stef and Lena ask further about the swelling. The nurse tells them not to worry. It is normal. Christmas music plays in the background. Lena turned it on.

Brandon asks Jude what happened the other day when he was running from the pier. Jude tells him he was smoking pot. Brandon tells him it will screw up his brain. Brandon wants to know where the nice kid went? When Jude moved in he was so sweet.

Stef heads to the station after Mike texts her. She gets into a dispute with the officers who questioned Callie. They act as if they did nothing wrong. She tells Callie everything will be all right. She will fix it – just don’t answer any questions.

Callie is booked for the hit and run. She is brought into get her finger prints taken before she is frisked and given a bed with other girls in juvenile detention. Meanwhile, Lena breaks down to a complete stranger in the hospital whose daughter is there. The stress is getting to her.

Brandon gives Jude an update the next day. Good news – Jesus is doing well. They took the bolt out of his head. He just needs to wake up. Mike shows up. He wants to make them breakfast and tell them about Callie.

Stef and Lena get another update. The doctors want to put him on a cooling blanket. He has a fever. Stef is angry that they keep trying things and don’t have a concrete answer about Jesus’ condition. Lena steps in to stop Stef from talking.

Stef goes out to the waiting room to see the kids. She tells them about Callie and Jesus. Jesus us still in the middle of a dream. He sees his moms in a church. Someone is in a casket – it is Mariana. His mothers tell him it is all his fault – they wish it was him that died. He sees him and Mariana in a crib when they were babies. Little Mariana tells him that he failed – he was supposed to save her.

At the hospital, Mariana tells Jesus’ girlfriend that she was right – it is all her fault. Jesus is in a coma because of her. Nick wasn’t at the festival. She was hallucinating. She was messed up – she is still really messed up.

Callie gets invited to a party by a girl in juvie. She tells her she isn’t interested. Lena and Stef talk to Jesus. They tell him to wake up. He is still dreaming. Its dark, he is in his hospital gown. Voices come from all around – Jesus, wake up. Take my hand. Wake up. He opens his eyes. Stef and Lena talk to him and he tries to talk back but his speech is scrambled.

Lena goes to the strangers’ daughter’s room to find her and thank her for comforting her. The woman’s husband explains that the woman’s mother died years ago. Was she talking to an angel?

In court, Callie’s case is called. The judge already has them pegged. He doesn’t want to hear the stories of Callie and Troy. He wants to keep Callie in juvie until the next hearing. The other lawyer calls for a fitness hearing. Stef is in shock.