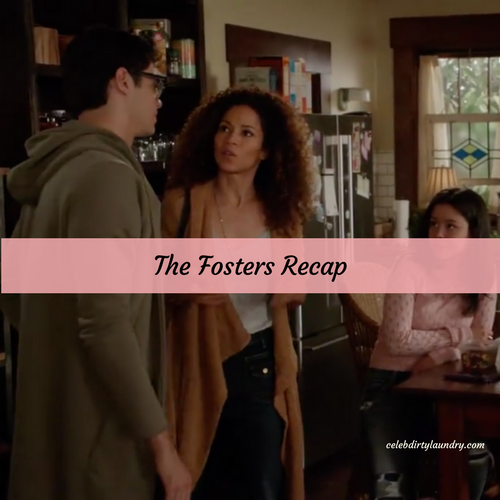 Tonight on Freeform their hit drama The Fosters returns with an all new Wednesday, March 21, season 4 episode 17 called, “Diamond in the Rough,” and we have your weekly The Fosters recap below. On tonight’s episode as per the Freeform synopsis, “Stef starts a new assignment in human trafficking and meets a teenage girl who turns tricks on the streets. Elsewhere, Lena deals with repercussions of holding an off-campus LGBTQ sex ed class; and Callie’s pursuit of justice impacts her relationship with AJ.”

Callie is in front of the grocery store with friends trying to get signatures for the foster care reform. Lena is practicing flash cards with Jesus. He is picking up on the ones with pictures but he can’t read the words. He says he has a headache. But comes clean when Lena confronts him. He has been keeping it a secret because he is sick of the doctors and the therapy sessions.

Lena is at work learning about a girl who has been picked up for prostitution. She talks to the teen about the tattoo she has on her chest. The teen doesn’t want to talk. Stef gives the girl her card.

Jesus comes back from the doctors with glasses. It isn’t his eyes, it’s his brain. Brandon says he looks like a minion. Jesus gets upset and goes to lay down. Emma texts Brandon. She needs him to get the letter back. The school calls Lena. They want to know how many kids without permission slips attended the sex ad. Lena says she will take responsibility.

Callie shows up at the basketball courts. AJ is playing ball with a girl, who he instructs from behind. She kisses him and he doesn’t pull away. Callie is upset. She gets in her car and leaves.

Callie is telling Marianna what she saw. Marianna doesn’t think it is cool.

Lena is nervous that what she did could affect her contract with the school. Stef thinks she is being paranoid. Lena thinks that Drew is trying to steal her job.

Marianna tells Jesus he looks cute in his glasses. She tells him that he will get better. She grabs the sketch pad out of his hand. He has been drawing magic treehouses, like the books they used to read when they were kids.

Marianna is asked about Callie by Stef and Lena. She tells them about AJ, but she thinks they need to worry more about Jesus. She wants to ask Gabe to help Jesus build one. It will be good for him. Marianna thinks he can get faculty to approve to get the money and do the project for his senior project.

Mike asks AJ if he has thought about making the adoption official. AJ tells him about Tyler and how he wants to move in with AJ when he gets home. AJ offers to move out in the meantime. Mike tells him absolutely not. Mike is heading to work. Callie is at the door. AJ is in the shower, but Mike tells her she can wait. Callie strips down and heads to the shower, surprising AJ, who just wants to take a shower. Her feelings are hurt. She leaves the bathroom. AJ comes out. He didn’t mean to be a jerk. Callie wants to leave, he stands in her way and then moves. She sits down on the bed. She knows she has been ignoring him, wrapped up in her own world. AJ tells her that he isn’t a little kid. He has his own things going on with Mike. Callie explains that Mike will be okay if AJ’s choice. They kiss.

Brandon is searching through Jesus’ room for the letter. Marianna comes up from behind him. She asks him what he has. She wants to know why Brandon has the note. Why doesn’t Emma just tell him. Marianna thinks Emma shouldn’t put Brandon in the middle.

Mike and Stef are talking at the station. He picked up the teen from this morning at a hotel and found codeine in her purse. She has been beaten up. She tells Stef that they were drinking soda and cough syrup. He got aggressive. She tried to fight him off. He started punching her. The cops came. Now she is scared that her pimp will beat her. She cries – she wants out. She can’t do it anymore. She isn’t safe at juvie. Her pimp has members everywhere. They will jump her.

Mike waits for Stef outside the hospital room. Stef didn’t realize that it would be so hard. The two talk about Callie and AJ.

It’s, Saturday, Marianna takes Jesus to school. He is self-conscious because of his glasses and helmet. He runs into a few friends who talk to him and tell him his glasses are dope. They meet with Drew about the treehouse. Jesus has trouble talking. Mariana patiently sits next to him for support.

Callie is back to getting signatures at the grocery store with some of the other girls from foster care. Stef brings the teen, Diamond, by to meet the mother of the foster home. A friend asks Callie who Diamond is as they all watch, Callie tells her she doesn’t know who is with her mom.

Lena arrives at the school for a meeting. She confronts Monte about not being invited by email. Monte explains that it was a mistake. The meeting begins. Some members want to know why there was a sex education class for LBGT kids. Lena tells them that it wasn’t affiliated with the school. They want to know why there were permission slips then. Monte admits that she made Lena collect them for a precaution. The others think Monte implicated the school by doing so. Given the stressful accreditation the school is going through, they suggest Monte resign. She looks shocked as does Lena.

Lena and Stef are drinking wine. Lena tells her about Monte. Drew will cover both jobs for now. Stef thinks they might make Lena principal. Callie comes in. She wants to know who Diamond is. Stef doesn’t say much.

Mike offers Aj an apartment down the hall for him and Ty. He has been saving all of the foster money the states send him. AJ is thrilled.

Callie and Diamond are talking before collecting signatures. Callie asks her if everyone is treating her okay. She says yes. Diamond asks about Stef. She knew she was a lesbian. Callie tells her she is lucky for all of the things Stef did for her.

Lena tells Marianna that Drew has rejected Jesus’ project. Jesus made not be a senior. He may have to go to another school. Marianna is concerned. She doesn’t want them to tell Jesus anything yet.

Diamond is going through someone’s backpack under the table. She steals a phone. She asks to use the bathroom. Callie takes her. She calls her pimp in the bathroom. She tells him what happened. He calls her an idiot. She ask him to come get her. He tells her that she has to bring one of the girls with her if she wants to get back with him.

Marianna tells Jesus that she wants to do the same senior project as him. She sits with him and reads him the Magic Treehouse book. He’s smiling.

Diamond returns Callie’s phone. Stef shows up. She thanks her for getting her in. Stef asks her if she is willing to turn Russell in. She agrees. Diamond tells one of the girls that she has a pretty singing voice.. She knows a record producer. She could introduce her to him. Stef and Callie hug from a distance. Diamond watches from a distance.

Marianna tries to call Gabe but the number has been disconnected.

Lena and a colleague are having coffee. She tells Lena there was never a complaint filed. Drew told Lauren. He is going to be the interim principle.

AJ asks Callie if she saw him kiss the girl at the basketball court. She admits she did. She asks him if he likes her. He does. It’s easy with her. He tells Callie that he loves her but everything is so hard.