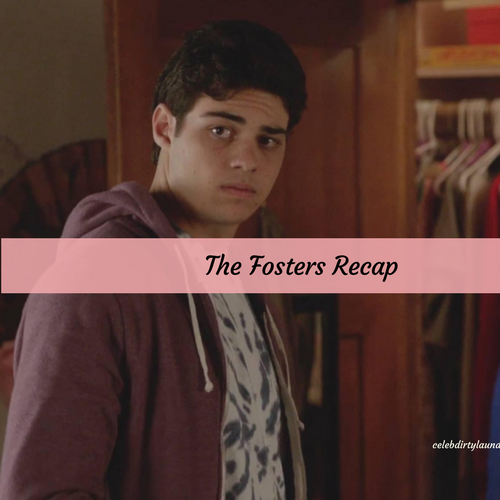 Tonight on Freeform their hit drama The Fosters returns with an all new Tuesday, April 4, season 4 episode 19 called, “Who Knows,” and we have your weekly The Fosters recap below. On tonight’s episode as per the Freeform synopsis, “Everyone in the Adams Foster household has a secret, but they all start spilling out. Meanwhile, Robert’s attorneys propose a strategy that Callie opposes; Monte and Lena join forces to stop Drew’s underhanded dealings.”

Callie is in the bathroom brushing her teeth when she gets a strange text on her phone. She asks who it is. Marianna comes in to brush her teeth. She asks about AJ and how they are. Callie doesn’t really know. She leaves the bathroom. Jude comes in. He wants to tell Marianna something that he doesn’t want their mothers to know. She is sick of secrets and doesn’t want to know.

Stef and Lena ask Brandon about the letter in his pocket. Brandon tells them that it is from Emma to Jesus. They want to know what Brandon knows. He admits that he took Emma to go an abortion. Stef and Lena need time to think about how to approach this situation. They tell Brandon to keep it to himself. Stef can’t believe that her mother knew and didn’t say anything.

Callie is in the kitchen. Brandon comes in. he didn’t see her. She tells him she is behind him, sitting. He asks her what she is doing alone. He tells her that their mothers don’t think she will be convicted. She asks him about how he feels about Julliard. They don’t really talk anymore.

Gabe is sitting with Marianna and Jesus talking about the treehouse. Anna brings Isabella by. Gabe has never meant her. They stand together adoring the baby. The scene bothers Marianna. She gets up to leave. Anna leaves. Jesus asks Gabe if he has received help for depression. Gabe has but he doesn’t want to go on pills with all of the possible side effects.

Stef, Lena and Callie meet with the legal time. They give her a make-under, putting her in a dress with a ponytail and no make-up. Callie is annoyed. She reveals in front of the team that her foster brother didn’t manipulate her. And that she also has his DNA. He is the killer. Stef excuses them to stop Callie from talking. Callie knows it was Troy. Stef is nervous that the DNA evidence will lead to the authorities finding out that Callie broke into Doug’s house.

Marianna asks Jesus if it bothers him that Anna is such a good mom now. It does bother him. They remember when they were left in their crib for a day at a time.

Callie and the foster girls are working on their chores in the yeard. Diamond gets into a dispute over Callie’s court hearing. She wants to know why Callie is still in trouble even though she says that Stef can help Diamond.

Stef is at work. She learns more about a pimp named Russell. He usually has 2-3 girls working for him. One of his girls has gone missing. The prosecution had talked her into testifying but then she disappeared. They aren’t sure if she ran away or was murdered. Stef sees graphic pictures of the girl’s past beating. She has a tattoo of Russell on her neck.

Emma shows up for Jesus. Marianna answers the door. She is cold to her. Emma wants to know why.

Stef and Diamond are talking about the girl who disappeared. Diamond admits that she was told by Russell to beat up the girl. After she beat her up she doesn’t know why she went. She also IDs another pimp who Russell stole meth from. Stef promises her that she can protect her and help her.

Jesus and Gabe are moving Gabe’s things in. In the middle of putting a box down, Jesus hears buzzing and zones out. Gabe asks him if he is okay. He asks him what they are doing. He forgets sometimes. Jesus admits that he hasn’t been taking his meds. Gabe asks him if he should get his mothers. He says no. He doesn’t want Gabe to tell them.

The girls are in front of the foster home. A man with neck tattoos comes by. He says hi to them. Callie arrives at the same time. She is suspicious of the man while Diamond gives him a look of familiarity.

Diamond retrieves something out of the trash. Marianna brings clean laundry to Jude. She wants to know what his secret is. Monte and Lena talk about her job loss. Marianna barges in with the news that they are trying to turn Anchor beach into a private school. Jude comes behind her, mad that she told his secret.

Callie tells one of the foster girls that she saw Diamond retrieve something from the trash. The others go in for a group session. The two of them search the yard and find a phone. Callie calls Stef.

Brandon asks Marianna why she told Emma she knew about the abortion. He calls her a crappy friend. Jesus walks in. They disperse. Lena comes in. She tells Marianna to keep what Jude told them a secret. She asks to talk to Jesus alone. She asks him when he stopped taking his meds.

Stef and Lena talk to Callie about what she needs to do for the case. Stef shows Callie an ATM receipt that Kyle had, showing he had motive for the killing. Callie needs to see him if they want her to say that Kyle manipulated her. Stef asks Brandon to take Callie.

Gabe arrives in the morning. Jesus is mad at him for telling the mothers about his meds. He yells at him and then gets mad that Gabe won’t take his meds. He tells him that he should have left to Tahoe. He can still go. Gabe leaves. Jesus cries to Brandon. He can’t live like this. Brandon gives him advice that makes him feel better.

Monte and Lena are on a stake out with binoculars looking into the Anchor beach situation. They spot Nick’s dad. Their son doesn’t go to the school anymore. Maybe he has a score to settle.

Callie waits for Kyle to come in for a visit. He has neck tattoos. He joined a gang for protection. She asks him about Martha and the money. She asks him if he killed her. “What if I did?” he responds. He tells her that she is a white girl with a rich daddy. He tells her not to come back.

Marianna talks to her therapist about Emma. Anna is there to try and help her feel better. Marianna asks her if she remembers leaving her and Jesus in their crib for days at a time. Anna gets angry and defensive and leaves the session.

Callie tells Brandon about Kyle’s tear drop tattoo. Stef sees Doug Harvey at the station with his lawyer. His lawyer sends Stef a video of Callie in Doug’s house.

Jesus learns of Emma’s abortion through Marianna’s twitter account. He is shocked but doesn’t say anything to her.