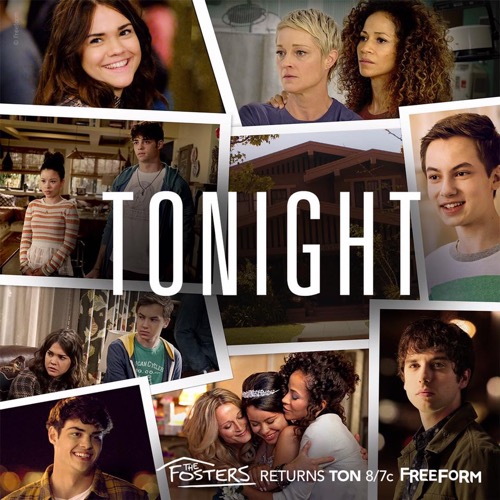 Tonight on Freeform their hit drama The Fosters returns with an all new Tuesday, January 31, season 4 winter premiere called, “Insult to Injury,” and we have your weekly The Fosters recap below. On tonight’s episode as per the Freeform synopsis, “Jesus (Noah Centineo) is knocked out and rushed to the hospital, where he fights for his life. Elsewhere, Callie’s (Maia Mitchell) put in danger after taking a ride with Troy; and Mariana feels guilty that her actions led to Jesus’ condition.”

Callie is in the car with Troy when she gets a call that the DNA isn’t Kyle’s but someone he is related to. Troy gets angry and begins yelling that Kyle is a monster. Callie tries to diffuse the situation when the car starts careening into oncoming lane. Callie grabs the wheel.

Jesus is in the back of the ambulance. He smells gas and his head hurts. Stef tells him to relax. He begins to shake violently. Stef yells in distress – what is wrong with him?

Callie and Troy collide with another car. Troy is knocked out. Callie gets out and calls 911. Troy comes to. He gets out to grab Callie. But gets back in the car and takes off.

Jude and Noah pretend that Noah’s dad owns a boat when they are at the pier. A man on the pier believes them and lets them aboard where Noah pulls out a joint.

Back at the hospital, Jesus is brought into the hospital where he is still shaking. Stef cries while watching him in pain. The doctors take her out of the room while they begin working on Jesus.

Brandon takes a long walk after learning that he is in trouble for academic fraud. He mails a letter before he walks to his girlfriend’s house. He tells her that he is in over his house. If he stays he will feel responsible for taking care of her and Mason. She doesn’t want his help – she isn’t helpless. He wants to come over and see Mason. She tells him that it is a bad idea. He kisses her goodbye on the cheek. She walks way coldly.

Callie goes to see Aaron. She tells him about Troy. Callie calls Stef, who tells her about Jesus. Callie is shocked.

Callie shows up at the hospitals where Lena and Stef explain that Jesus had a seizure. The police show up. They have questions for Jesus. Lena and Stef get angry. According to police reports Nick says that he is the victim with Mariana confirming that Jesus swung first. Lena refuses to let the police see Jesus unless she is in the room.

Brandon gets a call from Callie while he is in the middle of having sex with his ex—girlfriend’s friend. Meanwhile, Jude and Noah are high and eating whatever they can find on board the yacht as they talk and laugh about vitamins and nutrition. They kiss. Jude takes off his shirt.

The police visit Jesus at his bedside. Stef tries to calm him down. He gets angry before yelling that he can smell gasoline in the hospital. He suddenly begins convulsing into a seizure.

Jude and Noah come out of the yacht yelling that it is sinking. The man goes after them. Brandon drives by and sees them running. He picks up Jude and Noah.

Lena wants to know how long Mariana has been taking the pills for. Mariana says that she only did it because she was falling behind in school. She says she will never do it again. A nurse takes Mariana’s blood while she checks her blood pressure. It is high and she is dehydrated.

Brandon and Jude get dropped off at the hospital. The doctor explains to Lena and Stef that Jesus has a lot of pressure in his head. They need to drill a bolt into his skull to relieve the pressure. He is brought into surgery.

Brandon’s ex tells him that it was a mistake that they slept together. Callie watches from inside the hospital. Mike and AJ show up at the hospital. He tells Mike that he shouldn’t go in. He and Callie had a fight.

Brandon and Callie talk. He explains that he has broken up with his girlfriend. He also tells her about his academic fraud issue. She hugs him. Mike and AJ come in. Mike gives Brandon a Julliard Book. He bought it a year ago. AJ goes to Aaron and apologizes for all of the things he said.

Lena goes to the hospital church where she prays for Jesus. Stef comes in to show her support. Jesus’ girlfriend gets mad and tells Mariana that she blames her for Jesus’ accident. He was trying to protect her and that is why he is in surgery. Because of all of her lies.

Aaron tells Callie he is going to take off. He tells her that she needs to stop going around and telling everyone that he is trans. She says sorry. Aaron leaves, Callie sees the car accident that she was in on a nightly news report.

Stef and Lena comes out. Jesus made it through the surgery. He is the ICU and they have to wait to see him. When his swelling goes down. They want the kids to go home and get some rest. Stef and Lena ask for no more trouble. No more drama.

Callie goes to the police station. She wants to make a statement about the hit and run accident that happened this afternoon. Stef and Lena watch Jesus through the window in ICU as he sleeps. Callie is taken into a room. Two cops discuss her case outside.