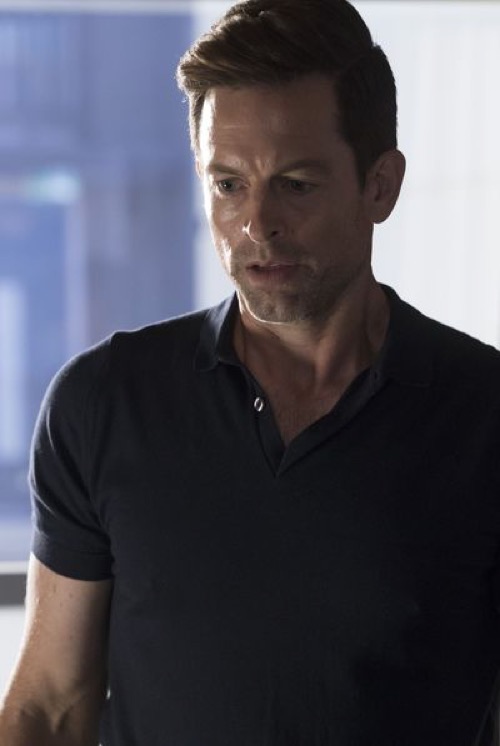 Tonight on NBC their new medical drama “The Good Doctor” airs with an all-new Monday, October 23, 2017, episode and we have your The Good Doctor recap below.  On tonight’s The Good Doctor season 1 episode 5 as per the ABC synopsis, “Shaun (Freddie Highmore) meets a young patient who resembles his brother who’s deceased, and later, Shaun struggles to understand why his parents hid the truth about his own health. Meanwhile, the team can’t figure out what’s triggering their patients’ allergic reactions.”

A son shows up on his dad’s doorstep. His father is upset to see him. His mother died 5 weeks prior and he didn’t even show up. He was too busy in Thailand. The father leaves the front door open and walks into the house. He collapses in the kitchen.

At the hospital, the man is having abdominal pain. Neil briefs them. The man cries out. They all head into his room. Shaun sees a young boy with an arm injury that looks just like his late brother Steve. He heads over to him and looks him over. He checks his vision and orders a CT. Aaron comes by. He cannot believe how much the boy looks like Steve. He asks Shaun how he feels. He feels fine. Steve is dead, he replies.

The residents come in to tell the man that he has a lesion on his pancreas. It could be a benign cyst or cancer.

Shaun watches the boy as he enters the tube for a CT. They talk back and forth. The boy Evan used to know a boy who had Autism too. He died. Shaun also knows someone who died, his brother. Shaun looks at the scans as they talk. The boy has a tumor on the side of his ear. Neil comes in. He isn’t happy that Shaun took off until he sees the scans.

Shaun heads out to the waiting room to meet with the boy’s parents to tell them the news. They already knew. They don’t want their son to know.

Shaun and Aaron sit and have lunch. They talk about Evan. Shaun thinks Evan should know. He thinks he would want to know the truth. Shaun has a flashback to when Steve wanted to know what he was going to get for his birthday.

Claire and Shaun talk as they work on paperwork. Shaun is going over Evan’s chart.

Claire and Jared discover that the man with abdomen pain has tapeworms in his brain. They talk to Aaron who used to be a neurosurgeon. They come up with a game plan.

Shaun is still working. He cannot stop thinking about Evan. With a pile of books and charts in front of him, he discovers that Evan doesn’t have cancer.

The next morning, Shaun meets Neil in the parking lot and tells him his finding. Neil isn’t optimistic, but Shaun is. He heads to see Aaron who tells him he can do some procedures without telling the parents. He advises him not to get caught. Shaun runs off.

Shaun goes to see Evan. He tries to pretend he is there doing some procedures but Evan can tell. Shaun admits what he is looking for. Evan agrees it is worth a try. He begins to put a needle in his lumbar region when the parents arrive. They want to know what is going on. Shaun can’t lie. He blurts out the truth. The father is angry. He tells Shaun to get out. Evan begins coughing up blood. Shaun calls for the nurses.

They take Evan into surgery. Shaun asks Neil to assist. He tells him he is too close to the case. Shaun watches from the viewing room. He and Aaron talk. If Shaun is wrong he is in trouble.

Jared sees the man’s son in the waiting area. Jared tells him that he needs to talk to his father and tell him the truth about his girlfriend, about why he ran away. As the father is wheeled into surgery the son admits that he is afraid to take over the family business because he thought he would fail.

In surgery, Claire sees something in Evan. She calls Neil over to see. Meanwhile, Shaun waits. He has a flashback of when he gave Steve a book for his birthday. Neil comes out to speak with the parents in the waiting room where Shaun is. Neil tells them that they discovered lesions on his ribs. The osteosarcoma has metastasized.

Aaron is in surgery. He locates the tapeworm in the man’s brain and takes the first one out. Jared is impressed. They have 3 more to go.

Evan talks with his parents. He tells them that he has known for a long time. Shaun didn’t tell him. Shaun watches from outside the room.

Shaun and Evan talk. Evan thanks him. Shaun is upset that he was wrong. Shaun asks for a favor. He wants to read something to Evan. He opens the book To Kill A Mockingbird, the book he gave Steve. Evan listens. Shaun leaves him the book and thanks him for letting him read. He gets up and walks away with tears in his eyes.