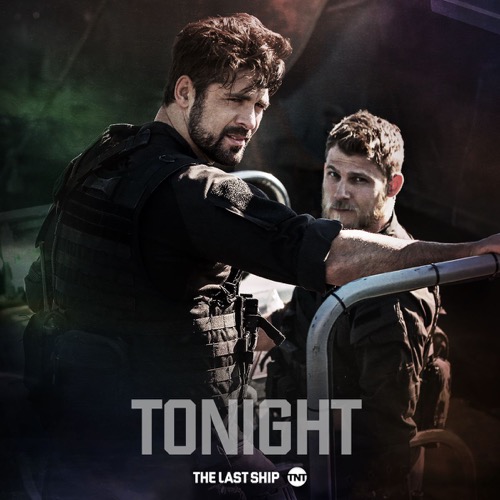 Tonight on TNT The Last Ship based on William Brinkley’s popular novel airs with an all-new Sunday, October 8, 2017, episode and we have your The Last Ship recap down below.  On tonight’s Last Ship’s season 4 episode 9 & 10, called “Detect, Deceive, Destroy/Endgame,”  as per the TNT synopsis, “The crew of Nathan James faces a threat that will test the limits of their Naval tactics and strategies. In the Season 4 finale, Chandler confronts his enemy—and his personal demons—in a final showdown, with the fate of humanity on the line.”

The team realizes that Vellek has a fleet of three Greek war ships to their one. The make a plan to draw out one at time and take it out. If they are attack by at all three at once there is no way they can survive. Vellek wants to head immediately to Malta and berates Lucia and Giorgio for giving in to the Greek commander who says they have to fight of the American Navy first. They try to convince him that they are trying to keep him safe. They support his plan and have since they lost Christos. Vellek calms down but insults Giorgio once again as he leaves.

Rios tells Jeter he has to take it easy. He has a punctured lung and must rest. He is not happy with that news. Tom and Mike can hear the propeller of one of the ships in the communication room but think it is a trap. Vellek and his family are on the Greek ship number four. The Navy sends up a helicopter and find three ships. Mike and Tom still think it is a trap and tell Sasha about the “Kennedy” maneuver. They try it and it works. They realize there are actually four ships.

The captain tells Tom and Mike they will now do the “Meylan” maneuver. They still need to draw out the ships one at a time and try to take them out. They send a team of Burt, Candie and Miller out on a small craft and the Greeks take the bait and change their course. The Navy helicopter starts searching a grid in the ocean to find the fourth ship. They are sure the seeds are on it. Vellek starts to act very erratic and again demands they head to Malta.

Burt, Miller and Candie load their boat with explosives and use them to take out the first ship. Miller is hurt but is conscious. Giorgio realizes that his father and Sasha have put the drug that destroys aggression in all of the seeds. Once the seeds are spread throughout the world they will all be at peace. Lucia gets on the radio and tells Tom and the Navy if they don’t surrender in five minutes she and the Greeks will begin killing innocent people. Tom and Mike realize there are at least a dozen fishing boats around them that are now in danger. Vellek demands that they increase their speed of their ship.

The Navy fire three torpedoes and takes out a second Greek ship. The Navel helicopter is hit and goes down. The third Greek ship and the Navy ship have a huge battle using torpedoes and bombs. The Greek ship takes a direct hit and Giorgio is killed. The ship goes down but Lucia and several others escape on a smaller boat. Now the only ship left is the one with Vellek and the seeds on board. Nolan is the only survivor from the Navel helicopter crash.

The team is distraught over the death of two of their own but Mike encourages them all and says they can win they just have to fight smart. Lucia arrives at the fourth ship and tells Vellek Giorgio is dead. He has no reaction but as she gets angry he assures her Giorgio died for the cause.

Vellek tells Lucia a horrible story of WWII and what happens to the body when starvation sets him. She asks why he is telling her this and he says because it is their destiny to get to Malta and deliver the seeds. They will save the world. He then hallucinates and sees Christos. Tom and Mike get word that Vellek’s ship is still heading for Malta. Lucia oversees the seeds being loaded into helicopters heading to Malta. On the Naval ship Candie and Miller kiss. Tom fills in the team that their plan now is to send a small team via motor boat to Malta. They will then use a truck to get to the airport. Vellek’s helicopters will most likely get to the airport about 10 minutes before them. They have to do whatever it takes to keep the seeds on the ground. The first step of the plan goes off without a stich and the Naval team makes it to the airport. They see boxes being loaded but when they open a box rather than seeds they find small plants covered in insects with no red rust.

The ground team takes fire and Miller is shot. They call for back up from the ship. Vellek continues to talk to Christo’s ghost in the lab and Lucia is worried. Burt is able to pull Miller to shelter behind a truck and radios back to the ship that they have no seeds just plants with bugs. Tom tells them that the bugs are what will spread the anti-aggression drug. They have to set all of the boxes on fire immediately. The team takes out two of the planes and sets all of the boxes on the ground on fire but one plane they didn’t see gets ready to take off. The team calls to the Ship and says they have to take the plane out. Mike and Tom realize if they engage the plane their location will be known but they have no choice.

The ship shoots a missile and takes the plane out. The last Greek ship gets the coordinates on the Nathan James and sends out a missile. The James sends a counter missile and they hit each other in the ocean. Vellek becomes more out of control as Lucia tries to calm him with little success.

Vellek slaps Lucia but she leaves and puts an armed guard on the lab. He is not allowed to leave. Tom and Sasha decide to take a small boat and embark on Vellek’s ship. This is personal to them both. They are successful and slowly start taking out the ships staff. Sasha takes out the ships engines and ability to fire its weapons. Lucia realizes that the Americans are on the ship. The alarms sound and Vellek sets all of his notes on fire. Tom enters the lab and chases him as Sasha looks for the seeds. The smoke and heat almost over take her but she finds a fire extinguisher and stops the flames.

Lucia confronts Tom on deck and shots him in the leg. She is about to finish him off but Sasha kills her. Tom goes after Vellek but he goes to the edge of the deck. Vellek says he offered the world peace but they chose war. Tom says not at the price of free will. Tom begs him to stay and help them use the seeds to save the world but he jumps into the water.

Miller is in the sick bay but will recover from his wounds. The team has the seeds and already has a plant growing without the red rust. They will be able to feed the world in no time. The ship heads to pick up Tom’s family and they will head back to the US. Sasha and Tom decide to get a fresh start.