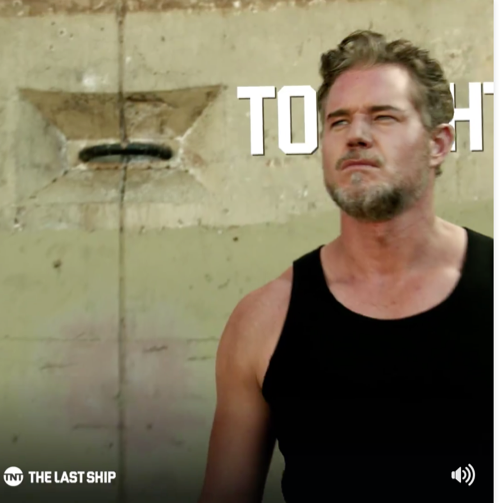 Tonight on TNT The Last Ship based on William Brinkley’s popular novel airs with an all-new Sunday, August 20, 2017, episode and we have your The Last Ship recap down below.  On tonight’s Last Ship’s season 4 premiere, called “In Media Res,”  as per the TNT synopsis, “In the Season 4 premiere, Nathan James faces yet another global disaster 16 months after thwarting the coup in America.”

A tractor plows a field in Iowa and a farmer notices all of his corn is covered in a red substance. An ancient seed holds the key to fighting the red substance. Just as Fletcher and Sasha are about to buy the seed a gun fight breaks out. They are able to escape but don’t get the seed. In the next scene, Tom works gathering fish on a fishing boat. Jeter briefs the team that 90% of the USA corn crops are now covered in the red rust. Rice and wheat are now at 100%. The rust is spreading faster than the models predicted. Insects are helping to spread the rust at an alarming rate. Within a year there will be no way to sustain human life if the rust isn’t defeated.

The palm seed is the only hope. Its DNA is immune to the rust. The only plan the team has right now is if the man who was selling the seed comes out of his coma and tells them where the rest of the seeds are hidden. Tom eats with the owner of the fishing boat, Alex and is very settled in with the Greeks. They listen to a song and Alex tells him the song is about a great captain who fought a deadly enemy and saved the world. Then the captain vanished. Tom asks how long did he know about him. Alex tells him the world is in trouble again and he is needed. He can’t run from his destiny. A man comes who is obviously strong-arming Alex. He seems to recognize Tom but doesn’t say anything and leaves.

The next scene is on a naval base in Spain. The team arrives and reunites with their families. They learn that the base will be closing. With the food shortage, they have to consolidate. Wolf and Rea flirt. The ship is loaded with food and supplies as Fletcher and Sasha learn that Omar Bin Dalek is the one who stole the seeds that can save the human race. They both think that Omar is just the middle man working for someone else but they don’t know who.

The man who was selling the seeds wakes up from his coma but refuses to tell the team where they are hidden. He utters the word Lion and then passes out again. Tom watches two man fight in the village square. Alex tells him Giorgio has started having these fights on every island then gives the villagers scraps of food to earn their love. Meanwhile, he makes the business owners pay him a percentage of their earnings.

The team talks about the fact that they haven’t heard from Tom in over 18 months. Mike still has no idea what their next step needs to be to find the seeds. Burke and Carlton hand out food and water to the people who come to the base. They notice every day there are more people and they are growing more desperate. Tom and Alex distract Giorgio’s men during a fight in the square and steal their boat. They bring the food from the boat home and the family has a huge. Alex’s wife worries what Giorgio will do to them for stealing the food. Sasha tries to figure out what LION means.

Carlton encounters a young boy at the gate of the base and tells him to move back. He has several bombs attached to his body which explode. Carlton is hurt and armed gunmen storm the gate and enters the base. A gun battle ensues. There are several breaches in the base and everyone tries to protect the ship. Gunmen overtake the hospital and kill the man who was selling the seeds. That was the whole point of the raid. Twelve American were killed and 28 injured. Now their only lead is dead. The team realizes that the LIONS stand for Algeria. The ship heads there to find the seeds.

Tom heads to the boat dock and see Alex’s boat in flames. He runs on border and pulls Alex out but he is dead. Tom knows it is time for him to leave. A woman is shown taking the seeds to man on a camel. The seeds are placed in a pouch and the woman leads the camel into the desert.

The ship heads out to sea and a sign is placed in the mess hall that says “no seconds”. The team meets to plan their next move. They will be in Algeria soon but they will be on their own. There is no back up in the area. They will be on their own. Giorgio confronts Tom and tells him he could have killed him. He offers Tom a job to work for him. Tom says no way but Giorgio doesn’t take no for an answer. Sasha and Fletcher talk but Sasha is distracted because of the situation in the US. People are hunger and rioting.

Tom and Giorgio arrive at his headquarters and Tom meets Lucia, Giorgio’s sister. There is an obvious spark between them. Tom realizes that Giorgio isn’t the boss. Someone else is calling the shots. He is forced to give a blood sample and notices that a necklace that Giorgio and his sister wear opens the doors in the building. As the ship nears the shore it hits a net and it kills all their engines and electricity. The emergency generator kicks in but then several missiles are shot at the ship from shore.

The ship is armed and ready to take down the next missile. Giorgio and his men watch a fight between their top men. Lucia is splattered by blood during the fight and Tom helps her clean up. Sasha, Wolf and Rea go ashore to search for the missile launch site to take it down. Another missile is shot at the ship but they are able to shoot it down before it reaches the ship.

Sasha and her team find the site from where the missile was shot but it is gone. The weapon is mobile and is nowhere to be found. The ship did sustain some damage from the first missile and while they can shot missiles out of the air they can’t fire onto the shore. Giorgio’s man loses the fight and Giorgio’s has him killed. Giorgio and the rest of his men eat a feast as Tom continues to charm Lucia. Another missile is fired at the ship and this one hits but the damage is minor. Sasha and her team find the missile launcher and prepare to take it out.As the team moves in on the launcher a gun battle breaks out. Tom and Giorgio’s next top fighter begin to fight. On the ship the team works to get a power source up and running so they can fire onto the shore to provide back up for Sasha’s team. Tom gets the upper hand in the fight. The ship regains power and tells Sasha’s team to take cover they are about to fire on to the shore. Sasha and team get away just in time as a missile from the ship takes out the enemy’s launcher. Tom knocks out his opponent but Giorgio wants him to finish him so Tom kills him.

As the team moves in on the launcher a gun battle breaks out. Tom and Giorgio’s next top fighter begin to fight. On the ship the team works to get a power source up and running so they can fire onto the shore to provide back up for Sasha’s team. Tom gets the upper hand in the fight. The ship regains power and tells Sasha’s team to take cover they are about to fire on to the shore. Sasha and team get away just in time as a missile from the ship takes out the enemy’s launcher. Tom knocks out his opponent but Giorgio wants him to finish him so Tom kills him.

Everyone returns to the ship and they realize that Omar is working for someone big. After the fight Lucia invites Tom into her bedroom. She fills him in on what is happening in the world with the red rust and also tells him the Greeks have an herb that ends the killer instinct in men. Tom doesn’t want any of the herbs. Instead he and Lucia have sex.