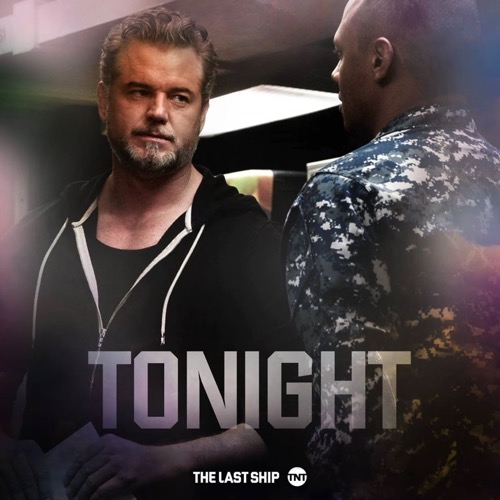 Tonight on TNT The Last Ship based on William Brinkley’s popular novel airs with an all-new Sunday, September 10, 2017, episode and we have your The Last Ship recap down below.  On tonight’s Last Ship’s season 4 episode 5, called “Allegiance,”  as per the TNT synopsis, “Nathan James is diverted from their mission when they receive a suspicious distress call from a fishing trawler.”

The show starts with Mike remembering back to the time his son jumped from a tree into his arms. He awakens in a hospital bed on the ship. The seeds are safe next to him. Elsewhere, Miller and Wolf talk about having Tom back. While they are happy, they worry he will take off again at any time. At the Society of Arts and Sciences Paul (father of Lucia and Giorgio) gives a lecture about what is currently happening in the world, he emphasizes trans-genetic coding. Paul is the mastermind behind the plan to get the seeds away the American Navy.

Tom argues that they need to get to Paul. While they have the seeds Tom believes that Paul has the technology to use the seeds now. It will take the US over a year to know how to use them. Captain Meylan disagrees with Tom and tells him they are taking the seeds back to the US now. Captain Meylan asks Tom if he wants to rejoin the team and regain his rank. Tom is not sure. He needs time to think about it. Sasha is torn about her feeling about Tom returning. Mike continues to be in and out of consciousness in the sick bay.

Tom calls his daughter and she promises she is fine. He says he will be back soon. Mike finally regains consciousness and describes his experience of being with his family. He can’t believe how real it seemed. The ship receives a MAYDAY call but Captain Meylan isn’t sure what to do. He is afraid it may be a trap. After talking with Tom, Captain Meylan decides to help the boat in trouble. The Navy helicopter puts a spot light on the boat in need as the team approaches in a speed boat. The team boards the boat and there is a lot of chaos. Burk is especially tense but the ship is cleared and the people are brought back to the ship.

Burk continues to be tense and distracted and the team notices. Each person rescued from the boat is photographed and given food and medical attention. Tom apologizes to Kathleen for not coming to her when her dad dies. He just didn’t have the words. She blows him off. Burk and Miller have words about his attitude but he remains angry. Mike returns to his room with Tom. They talk about his time away. One of the refugees had a drug in her the bag. It is the same drug that was given to Mike. The doctor studies it to see what he can find. Fletch meets with one of the refugees. They know each other by name.

The refugee is actually a British agent who tells Fletch that the British are no longer working with the United States. They are going it alone because they have been in contact with Paul. He can use the seeds now and will help their country first. He tells Fletch he must steal the seeds and get them off the ship right now. Fletch is unhappy but agrees to steal the seeds. The plane that was sent to fly the seeds back to the US was shot down by Paul. The team tries to figure out their next move and Tom and the Captain argue again about Tom’s wish to go after Paul.

Russ and Tom argue about his decision to leave and to be gone for so long. Russ urges Tom to formally return to the team and help them in their fight. Sasha visits Tom in his room and sees that he has signed the papers to rejoin the Navy. She asks if he found the peace he was looking for while he was away. Mike looks at photos of his family and sobs. Tom is sworn in as an officer in the Navy. The team is thrilled to have him back.