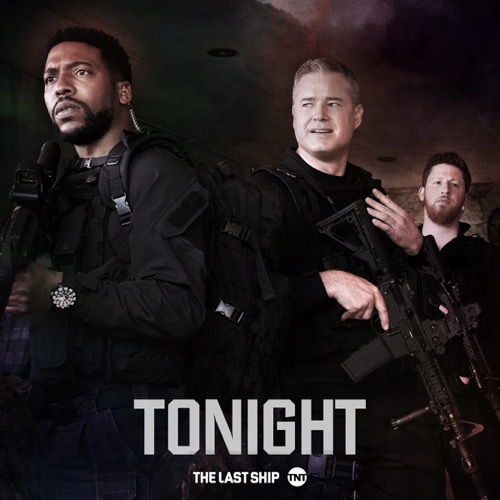 Tonight on TNT The Last Ship based on William Brinkley’s popular novel airs with an all-new Sunday, September 24, 2017, episode and we have your The Last Ship recap down below.  On tonight’s Last Ship’s season 4 episode 7, called “Feast,”  as per the TNT synopsis, “The search continues with a reconnaissance mission but things turn violent when an old foe resurfaces.”

The Last Ship opens with Sasha taking pictures of a dead body. The crew stands with their heads down in prayer. They are released and Burt tells Miller “Never again.” Rios asks Jeter if he is OK as it is obvious he is in pain but he blows him off. Ray’s hand is shaking but he also blows it off as Kathleen kisses him. Meylan tells Mike, Tom and Sasha that there is no sign of Fletcher and the seeds are gone. Meylan then suggests that they go to Giorgio’s house to see if they can find the seeds. Tom can lead them to the house.

Vellek studies the seed in his lab and tells his team they are going to save the world. He then insults Giorgio and sends him away. Fletcher tells them they must work fast before Tom and the Navy show up. Tom updates the team with the layout of Giorgio’s mansion and lab. Giorgio gets drunk as he mutters about his father’s disrespect. The Naval team suits up to get ready to attack Giorgio’s compound.

Fletcher calls into his superior and she commends his work on getting the seeds. Vellek, Lucia, Fletcher and the Greek Admiral have dinner. Vellek insults Giorgio and the Admiral gets angry that Vellek has also made a deal with the British but Lucia is able to calm him down. Tom and the team enter the compound and see that Giorgio is having a party. Alma distracts Giorgio and the team captures him. They use his key to get into Giorgio’s office and download data from his computer.

Giorgio taunts Tom but he doesn’t take the bait. Omar and his armed guards storm the party and open fire killing civilians and Giorgio’s men. Giorgio freaks out when he realizes that Omar is still alive. Tom radios the ship and asks that a helicopter be sent to get them out. Omar talks to Giorgio through the security cameras, telling him to come out or he will kill everyone. Omar and his men begin to search the house as the team waits for the data to finish downloading.

Giorgio taunts Sasha about Fletcher and she puts her gun to his head but Tom is able to get her to back down. The team gets into a gun battle with Omar’s men. The download is complete and the team heads out. They leave dynamite that explodes as Omar enters the office. Giorgio breaks away and runs back towards the office as it explodes.

The team makes it safely back to the ship. Kathleen analyzes the data from Giorgio’s computer and tries to decode it. Mike and Rios study Giorgio’s ledger and realize he was studying the level of aggression in each one of his fighters. Sasha then shows the team a video she found of Vellek talking about his ability to tame aggression in men by injecting them with a drug. He wants to turn the world into sheep that he can control and lead.

Vellek is then shown with the Greek Admiral who is now calm and doing whatever Vellek tells him to do. He has been given the drug and is now under Vellek’s control. Sasha has been studying Giorgio’s ledgers for hours trying to figure out the code. Tom tells her Fletcher’s actions aren’t her fault. Tom holds her hand and asks her if they can fix their relationship. Kathleen finds the key to Vellek’s data and the labs whereabouts. Giorgio is alive and in his father’s lab. Vellek yells at him for allowing his data to be taken by the Navy. They realize that the Navy will be there soon. It turns out the lab is on a ship.