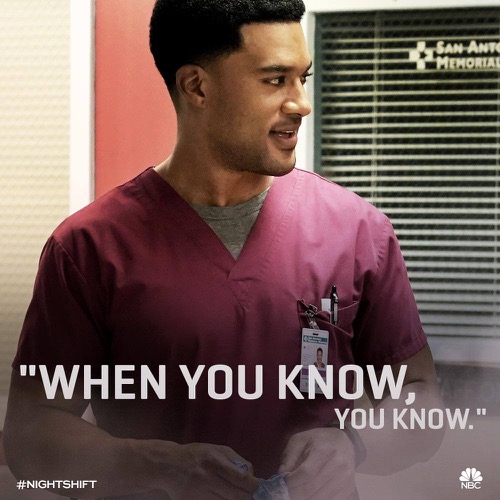 Tonight on NBC their new drama The Night Shift airs with an all new Thursday, August 31 season 4 episode 10 called “Resurgence,” and we have your The Night Shift recap below. On tonight’s Night Shift episode as per the NBC synopsis, “In the Season 4 finale, a shooting at a nearby college sends TC, Jordan, Drew and Amira into the field, where they assist Rick with a deadly situation. Scott implements a new training program and locks horns with Julian. ”

San Antonio Memorial was recently selected to run a trial combat medical training center. However, Scott had seemingly forgotten to get permission to throw the hospital in the running much less run a trial. So Julian came back into town and he demanded answers. The other man had wanted to know why Scott would volunteer for something like that when he knows that the hospital was low on money and needed everything to go according to plan if they were ever going to get a loan yet Scott had told Julian that he needed to trust him.

Scott said that running a training center would bring in cash flow and that they needn’t worry about what ifs because they weren’t even sure if they would get the contract. Yet, Julian hadn’t wanted to take the risk. He said that someone could get hurt during training and sue them or if they fail then that would become public knowledge. So Julian had also threatened Scott. He said that if anything went wrong that Scott would be out of a job and that he would demand Scott return that bonus he had received.

But Scott believed in Jordyn and the others. He knew that they were right about the program and that they could run in competently. So Scott decided to stand behind the others and he thought TC was right when he later took the training team out in the field. The hospital had been alerted to a mass shooting at San Antonio University during the college’s commencement ceremony though there was an additional danger to anyone responding to the call because multiple shooters were still on the scene.

So TC was directly tacking the team into danger and Scott still had thought it was a good idea however there had been another incident that no one had accounted for. There had been a young woman volunteering to act as a person in need for the training center and she hadn’t been able to get back up like all the others. Though Paul and Shannon had taken her back to the hospital and checked her out so they found something. They found out the patient, Anna, was suffering from an irregular heartbeat

As the situation went, the irregular heartbeat was something of a genetic disease and so the hospital wasn’t at fault. However, there was a problem with a certain someone’s bedside manner. Shannon had found out that Anna was going to school because that’s what her parents wanted and so she snapped at the young woman. She said that she should devote her life to what she wants to do and not what she has to do. So that was a little out of place except Shannon was coming from some personal when she told Anna that.

Shannon as it turns out has been thinking about leaving the hospital because she wasn’t happy there anymore and so she eventually worked up the courage to tell Paul what she’s been doing. She’s been applying to other residencies and she told him that she was leaving because she didn’t become a doctor to wear body armour or train combat medics. But Paul also had something to confess. He said that being around soldiers has inspired him and so he wanted to go places like Africa or Syria to help. And no one thought that was a good idea.

Shannon would later decide to return to her clinic on the reservation and she wanted Paul to go with her rather than go near combat. Yet, Paul wouldn’t listen to her and he wouldn’t listen to TC either. TC had also thought it was a bad idea and had tried to talk Paul out of going though Paul said that it was his decision and that he was going despite what they said. So the two people he confessed his plans to had accepted in the end that they couldn’t change his mind and had kept quiet about everything because Paul wasn’t telling anyone else.

Paul had decided not to tell his family what he was doing because they were all so happy about Kenny and Bella’s engagement. Though from the start, he had been thinking about going with TC and Amira to Syria. The couple were staying in town to get the program approved except they planned to return to combat afterwards and unfortunately it had been Amira that told Jordyn that. So Jordyn had gotten upset. She has been telling herself and everyone else that while she loves TC she wasn’t in love in him, but Amira called her out on that.

Amira said only Americans thought there was a difference and so she knew that Jordyn still cared about TC. But the truth didn’t come out until after they dealt with the shooting victims. The environment had been dangerous and more than one person had tried to kill off any person they deemed imperialistic however Jordyn and TC got through it and more importantly they eventual won the contract from the Rangers because the colonel thought they trained the team to react well in the field. So the hospital won a lucrative contract and TC told Jordyn that he wasn’t needed anymore because he only agreed to stay till the decision.

However, Jordyn ended up telling him that she would miss him and she also argued with him because he couldn’t be sure if he would come back this time. So TC did the only sensible thing to do to show Jordyn he cared. He decided to stay in San Antonio and take Drew’s place to run the training program because Drew later went to Ranger School. And so the last time everyone was all together was at the engagement party. Julian had went all out on the engagement party and so everyone came out to celebrate the event and it turns out Paul left his family without telling them where he was going.

So after a couple of days or weeks or who knows might have passed, TC found himself in San Antonio with Scott and Jordyn meanwhile Paul was in Syria with Amira, Shannon was running her clinic on the reservation with supplies from a supportive Jordyn, and Kenny was basically becoming the son Julian always wanted because he was actually interested in the family business.