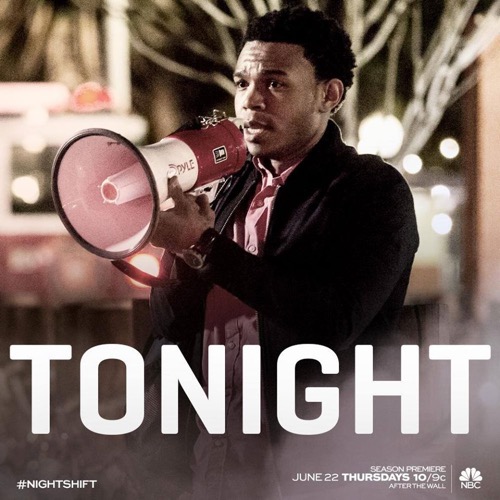 Tonight on NBC their new drama The Night Shift airs with an all new Thursday, June 22 season 4 episode 1 called “Recoil,” and we have your The Night Shift recap below. On tonight’s episode as per the NBC synopsis, “Jordan and Drew perform a daring rescue in the Season 4 opener. Also: Paul deals with fallout from standing up to his father; Scott dives into his professional life; a traveling nurse with a mysterious past arrives and TC is held captive in Syria.”

Unfortunately, TC and Syd were separated in the blast. He had been kidnapped by a jihadist following the explosion and was even taken to a second location however he had no idea about Syd. TC had thought that maybe she had been taken as well by someone else or merely not taken at all. But he was eventually rescued by a young woman named Amira and she told him that she hadn’t seen a woman among the injured or the confirmed casualties. So she told TC that he should give up and he just couldn’t.

TC said that his gut told him that Syd was still alive and so he didn’t want to abandon her during an attack. However, the one person that could give him answers about what happened to Syd was the jihadist. He had gotten picked up as well and had been injured. So TC volunteered to treat him and he had hoped that would get the other man talking though the jihadist firmly stated that he didn’t want to speak to Western “scum” and Amira had thought TC was foolish for trying. She said that members of the caliphate were loathsome killers and therefore she gave their captive up.

Amira told the people she was with that they had captured a jihadist alive and had ensured that TC was out of the room when their prisoner was tortured for information. Though neither Amira nor people later got anything out of their captive and were forced to abandon him when the government planes returned to drop even more bombs. So Amira and the others left yet she had to try and had asked TC to come back with her before he got caught in another explosion. Except TC still refused to go.

He knew the risks and had said that he couldn’t leave Syd behind. But Amira stopped trying to convince him to leave and chose instead to hand over what she had found on the prisoner. It was a bandana and it belonged to Syd. So TC later took custody of the prisoner and had volunteered his services if the other guy could lead him to his friend. And so TC was off being heroically foolish again right as Jordan thought that maybe he had been right about how to handle things back at the hospital.

Jordan and the others had walked out after Topher was fired however they had left the hospital in the lurch with barely any hospital staff and had nowhere to take Mac after he was injured in a forest fire. Yet, with their pride in the way, Jordan and Drew had tried to take Mac to a Vet hospital only to find those places were usually overcrowded and understaffed. So they eventually gave in enough to take Mac back to their old hospital and there they found out that Kenny had already crossed the picket fence.

They had also tried to make Kenny feel bad about going back to his job, but he wasn’t ashamed to admit he was broke and couldn’t afford to miss a paycheck like say doctors could. So they couldn’t embarrass him and for that matter they couldn’t expect favors from Julian. Julian said that there were other patients that came in first and that there was no reason he should bump their friend over everyone else. Not even if it made him look bad. However, Julian was willing to negotiate terms with Jordan.

He told her that if she came back and brought everyone else back as well that he would perform the surgery on Mac and so Jordan did agree to those terms. But then again, Jordan was never actually going to go through with it because Julian still didn’t want to invite Topher back. So Jordan was a little reckless herself though she did mention a counteroffer to Julian afterwards. She told him that she knew how the hospital could hire back Topher because she had talked to Veterans Affairs and had found out that the government was willing to pay them to take on some of their patients.

That way they could get checks that wouldn’t bounce and the hospital could become solvent despite taking on additional patients. Though Julian only agreed to brining Topher back as long as Jordan steers the ship and Topher wasn’t the ER Chief. So everyone got what they wanted and the hospital didn’t have just temps yet there was this one temp, Cain Diaz, that was really good. He had helped both Kenny and Shannon realize that the patient they mistakenly thought was a drug addict was who he said he was – a celloist. A celloist that never took drugs and was in fact drugged by his neighbor. The same neighbor that hated him playing at night.

So both Shannon and Kenny had misjudged the situation and they had nearly costed their patient his once in a lifetime audition. Yet, Cain save the day. He made them realize that they shouldn’t use their past experience with the Night Shift to judge everyone by how they appear because sometimes people can be taken at their word and, together, they all helped Melvin make his audition. They had arranged for Melvin to audition via webcam and had cleared out the bathroom so he wouldn’t be interrupted, but while the staff had come together in the end to work everything out, there was an incident that no one saw coming.

Drew it seems had gone out to a theme park after two girls were caught in a rollercoaster car that was barely hanging on and so he had told the girls what they had to do in order to survive. He said that Abby’s intestines were showing and that she couldn’t make the fall so he needed to bring her into the cart with him and the fireman however Sophia could make the drop. He then explained that she would land safely on what they had set up below and that it was set up to catch her no matter what she may think. But she was still scared.

Sophia thought that falling would kill her and so she let panic set in. Once Drew released the safety hatch on their car, she had tried to jump into the cart despite warning and there wasn’t any room for her. So unless she lets go, she could cause the cart to snap and kill everyone.