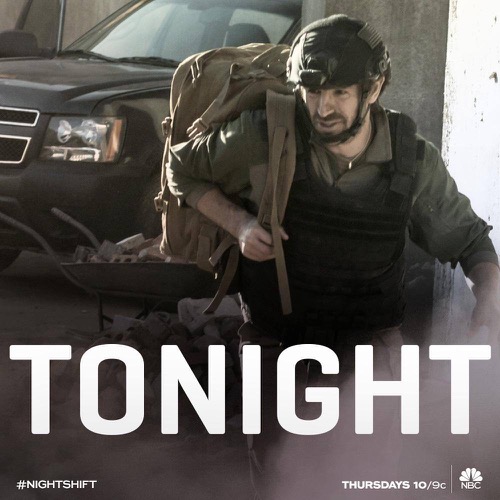 Tonight on NBC their new drama The Night Shift airs with an all new Thursday, July 13 season 4 episode 4 called “Control,” and we have your The Night Shift recap below. On tonight’s Night Shift episode as per the NBC synopsis, “A patient from a distant town arrives for surgery. Meanwhile, Jordan gets creative to help a veteran in need; Drew struggles with being a working parent; Kenny learns to not worry about trivial matters; and TC joins in a daring rescue mission in Syria.”

TC had made a mistake. He had told a concerned mother to give the US Army false intel in order to get access to their base and medical equipment for her son however the intel she had given the soldiers had unfortunately been a trap. They had gotten bogged down and had had to make a retreat. But a soldier that TC had known and had some sort of bond with had gone missing. So the army was sending out a team to go look for their missing guy and TC had asked that he go with them.

TC blames himself for what happened to Duke and he wanted to find him to clear his conscience. However, the commanding officer on the mission had told TC to back off. He said that nothing he did could ever make up for feeding them false intel. So TC had thought that was the end of it though Amira had come through for him. She had gotten a general to ok TC going on the mission and so he was allowed to go only Amira had warned him before he left. She said that she had pull a lot of strings to get TC on the mission and that the others weren’t happy.

TC had apparently thought that the others had accepted his mistake as what it was, but he had been wrong and there were some soldiers on the base that were essentially gunning for him. Though there was truly nothing he or Amira could do that would change what he did. So he had been forced to watch his back with the guys and had gone on the mission anyways because he had been hoping to still find Duke alive. And so he had ignored it when he was called “Cinderella” and he had naturally ignored the order to stay in the car.

TC had wanted to be there helping and so he left the car within moments of being told not to. But it turned out to be a good thing that he ignored orders because he found a man down and was able to stop a crucial bleed. So TC was doing his best to be there for everyone and not just Duke yet his old hospital had had different problems to deal with. There had been a teenager that had a facial tumor that she wanted remove and she had wanted it off her face so bad that she had lied about her age simply to have the surgery.

Yet, Tina’s grandfather had found out that she had gone to the hospital and he had stormed in to stop the surgery. He said that they were Jehovah’s Witnesses and that they couldn’t have blood transfusions which was what she was going to need to get the tumor removed from her face. So the grandfather was dragging Tina out there when she panicked and grabbed a scalpel. Tina said that she wanted the facial deformity off her face and so she slashed her face in order to force the doctors as well as her grandfather’s hand however the cut had caused a bleed.

The bleed was quite heavy and so Tina did eventually have to get more than one transfusion, but she had lost a lot of blood and had lost all signs of life for more than forty minutes. However, Scott who was the primary doctor on her case hadn’t wanted to call it. He had believed that he could still save her and so he just kept trying everything even as others began to question his actions. The other doctors in the room though they should call the time of death and Kenny had actually gotten Jordan because he thought that there was something off with Scott.

So Jordan had checked in and she found Scott working on someone that was most likely brain dead from being down so long. But Scott didn’t want to stop working on her and he had kept going as everyone else had lost faith. The others had suspected that the girl was never coming back and that it would be a miracle if she was revived or could even wake up after her ordeal though Scott on the other hand had kept reminding everyone that they could pull off the impossible and so he kept pushing despite what anyone else thought.

Which included Kenny. Kenny had given up on Tina a long before anyone else and he had gone to Tina’s grandfather because he hadn’t wanted to give the man false hope. Though Mr. Mills hadn’t been ready to let go and he had asked Kenny to pray with him. He thought that there was still a chance for Tina and so he had gotten Kenny and eventually many of the others to pray with him for that miracle. So it had almost come as a surprise when Tina had regained a pulse in surgery and that Scott was able to take her up to the OR to finish her facial surgery. And so it was a miracle.

Everyone in the hospital had talked about the girl that was dead for sixty-one minutes and who had come back with all functionality as well as getting her tumor removed. So Scott had become a legend overnight and what he did inspired others. Kenny realized that had been petty with how he was treating Cain and so he had returned the piece of wood that Cain loved to carve all the time. Yet, the funny thing about that piece of wood was that it helped Cain cope with the things he had to live through back in Mexico and so going without had helped him to open up to Jordan.

Jordan had thought that only soldiers suffered from PTSD and what she hadn’t realized was that there were several types of war going on in the world which meant she couldn’t always judge what another person had been there. So Jordan had been contrite. She had misjudged Cain an adrenalin junkie and she had misjudged Scott as losing it. But in the end when Scott told her that this was his hospital and that he would do things his way, she agreed and hadn’t bothered to argue with someone that had been proven right.

So the hospital had seen a miracle and they had seen a fraud when someone from patient care had pretended to be a patient just to find out how the hospital was doing. However, that actor that pretended to be a patient had also become somewhat of a friend. Arthur had genuinely felt bad about wasting Drew’s time and so he had used Drew’s phone to somehow get Drew back on speaking terms with his mother. The same mother that had taken his father side when they found out he was gay and had cut him out of their lives.

And so it was truly day of miracles when so much could happen, but while TC had safely come back after helping to people in field, he had seen his mistake in the end and had confessed to Amira that she had been right about life in Syria.