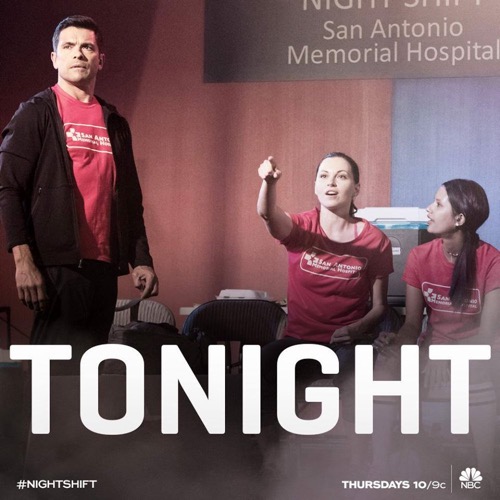 Tonight on NBC their new drama The Night Shift airs with an all new Thursday, July 20 season 4 episode 5 called “Turbulence,” and we have your The Night Shift recap below. On tonight’s Night Shift episode as per the NBC synopsis, “Drew faces an emergency on his flight home when passengers become sickened. Also, some staffers participate in an obstacle-course fund-raiser hosted by Akbar Gbajabiamila (“American Ninja Warrior”); Scott has an unforgettable date; TC treats a soldier.”

Drew has been reunited with his mother. But, there were a couple of things that he had forgotten about her. Like how pushy she could be and how sometimes that could be annoying however she willing to argue with her husband and risk her own marriage in order to be there for her son and granddaughter. So Drew was happy to have her back in his life and he just wished she hadn’t made such a nuisance of herself on the plane. Lily was traveling with both Drew and Rick back to San Antonio and she apparently liked her Bloody Marys.

The drinking as it turns out added to her feistiness. However, Drew was used to his mother embarrassing him and it hadn’t even surprised him when she volunteered his services after hearing that a doctor was needed on board. That was simply who his mother. So Drew did check on the sick patient that was showing signs of food poisoning when suddenly several other patients also became ill. There were a few of them that were coming down with a temperature and the majority that were vomiting up everything they had yet none of it made sense.

The patients didn’t have anything in common that Drew could point to as the cause and eventually the first person he saw was found dead. Yet, that too didn’t make sense. Drew had made sure that the Ranger’s fan had had oxygen and that he was in a stable condition before he moved on to check on the others. So Drew didn’t know what was causing everyone to be sick though he did know that it could be fatal and so he had gotten as many hands as he could to help check on the others. His husband and his mother try to see to everyone and make sure that they were ok.

Rick checked on their drug supply and tried to find more amongst the patients while Lily checked everyone’s fever. She had heard one flight attendant complain of being too hot and so she had tried to get her a cold compress, but the poor woman said that it felt hot to her and several others had thought so as well which seemed odd. Though Drew was able to piece together what was making everyone sick. He thought that they were suffering from a seafood poisoning and didn’t know why or how they had all gotten sick.

The plane hadn’t served any fish or seafood. Yet, people were becoming ill from it and a pregnant woman onboard had started to seizure. So Drew decided to perform a cesarean seeing as the woman was already at thirty-seven weeks and was in distress however he knew it wasn’t going to be easy. He had to operate on a plane floor and perform surgery on a seizing woman while the plane was suffering from turbulence. And so he had tried to do the impossible and in the meantime he had the flight attendant push as much pressure as she could on the pilots to land.

However, while Drew was doing the impossible, the rest of his team had attended a fundraiser for Cystic Fibrosis. They had been forced to go through a series of activities all in the name of charity and Jordan had decided to up the ante by betting against the Day Shift. She had bet them that whoever won would have to take over the weekend shifts for the next six months and so she had been counting on her team to come through for her, but Kenny and Paul got into a fight over Shannon.

Shannon didn’t technically live with them however she was always at the house and was messiest person there. So Kenny had wanted Paul to talk to Shannon about that and he also wanted her to lay off of him as he was going through the obstacle courses. But Paul told Kenny to lay off and that he was thinking of inviting Shannon to move in. Which Kenny didn’t take very well. Kenny accused Paul of being whipped and had gotten into a nasty fight with Paul over who was sadder – the guy willing to do anything for his girlfriend or the guy that had to move in with Paul.

So Kenny then quit the competition. He didn’t want to be around Paul and had left the others to fend for themselves in the competition. They didn’t have TC who was overseas and they didn’t have Scott because he went out on a date. However, the team luckily got Cain to step up and Cain had been just as good as Kenny if not more so. He had raced through the courses and had seemed like the perfect fit all the way up until he injured his knee. Cain said that an old injury was acting up and so the team realized they needed Kenny back. And they asked Paul to fix things

Paul had gone too far when he got into a fight with Kenny and even Shannon thought so. She later told Paul that she could speak up for herself and that she’s willing to hash things out with Kenny on her own terms. So Paul went over to Kenny and he apologized to his best friend. He realized in the end that he was making Kenny feel unwanted at the apartment and that he shouldn’t have put someone paying rent in that position much less someone he cared about. Yet, Kenny was quick to forgive and he helped the team win over the Day Shift. And so they wanted to celebrate though they were called into work for an emergency.

They had found out that the plane Drew was had had several sick passengers and so they wanted to see to the patients as well as check up on their friend. Though while they were running, Cain’s knee suddenly healed. He had apparently been faking his injury so that Paul and Kenny could make up. So he became hotter to Jordan for doing that and she ended up asking him out right as things were settling down at the hospital. The passengers were getting their treatment and Drew had managed to save a little baby boy’s life with that C-section. So everything had worked out after all!

Drew and Rick now had a baby named after them and his mother had truly come to accept his marriage and her granddaughter. Yet, Scott had gotten some teasing at work because he had brought his Tinder date in after she collapsed after sex. So the doctors and the nurses looked up his profile and had started to calling him “Hot Stuff”. And the teasing didn’t end there. They also played the song “Hot Stuff” as he left the building and that had both embarrassed and pleased him now he’s got a reputation.

And so the only one that was missing out was TC. TC had stayed in Syria and he thought that he was doing good work with help out the soldiers, but a soldier had come in with an unexploded grenade still in him and that had forced TC to admit something he hadn’t wanted to because it turns out there had been warning signs about Amira. She looked like crap half the time and there were drugs occasionally missing. However, TC didn’t acknowledge it until they were in surgery and he couldn’t trust her with her shaky hands to help. So TC threw her out of the OR and finished the surgery by himself.

Then once had had saved Corporal Steven Mason grenade, he had talked to Amira and he asked her if she had MS. So she admitted that she did. Amira had thought that she could handle it and had been forced to confess that she did need treatment however TC had wanted her to get treatment in San Antonio and she told him she couldn’t. She said that it was be better if she went to London because that’s where her husband and TC hadn’t known that she was married. They had started to sleep together not that long ago and so he thought that she was single like he was. But Amira apparently thought that sex and love could be two different things so she promised TC that she was coming back after treatment.