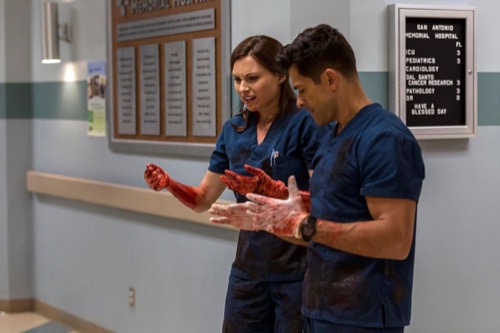 Tonight on NBC their new drama The Night Shift airs with an all new Thursday, July 6 season 4 episode 3 called “Do No Harm,” and we have your The Night Shift recap below. On tonight’s Night Shift episode as per the NBC synopsis, “Jordan and Cain travel to the scene of an oil-field explosion and treat a patient with extreme injuries. Also, Drew and Paul try to save a patient’s severed hand; Scott encounters a person from his past; and TC tries to help a sick Syrian child.”

Topher has been gone for a month now and everyone continues to miss as well as mourn him. However, life was forced to go on and the hospital had taken on an even bigger patient load since merging with the VA. So the staff were doing their best to remember Topher in their own way and they did that by trying to keep his memory alive. Like when they fought with each other and automatically knew that Topher would scold them about it because he would say he had kids at home and didn’t need to deal with them fighting at work, but while pretending that he’s still around to give them advice has helped, there had been some that refused to process what happened.

Like TC! TC stayed in Syria and did his best to offer up his medical knowledge to the refugees and rebels that were fleeing the war-torn area. But TC being the same man prone to rashness as before had also refused to bend to the rules out there. He had been told for example that he couldn’t risk surgery on an eight-year-old because the child would need supplies that could draw attention to them though TC had ignored that and done what he pleased. So TC didn’t care about what the army thought or that there was a balance between gaining their protection and being left out in the wild on his own.

Though instead of dropping Jordan into hot water over his antics, it was now Amira. Amira was the one that had to smooth things over and she looked after TC’s interests better than he did. So she was trying to look after him and give him advice yet he wasn’t making things easy and had repeatedly push back against the army by demanding transport for the little boy. He said that the child would die without the necessities and that he could easily save him if he could just get the go-ahead. And so TC refused to relent or even compromise as long as the army stood in his way of doing what he thought was right.

So TC was once again fighting the good fight and it didn’t seem like he was thinking about returning home anytime soon because he had allowed himself to become far too entrenched in the politics over there however, unbeknownst to him, his former sister-in-law Annie had reentered the picture. She had apparently gone to the hospital with Alan Apone because Alan needed surgery and she had hoped Scott would put behind any leftover hard feelings to help. Yet, Scott didn’t think it was wise to operate on Alan and had given the other man’s case file over to Paul. He said Paul could handle it and Paul had funnily enough been told by his girlfriend not to get in the middle.

Shannon had told Paul that he shouldn’t try to give either Annie or Alan advice on their lives because why would they want to hear from some kid in his twenties that had never been through any serious hardship. However, Shannon did quickly realize that she might have been too harsh with Paul and had tried to backtrack some to make peace. So Paul was willing to overlook the criticism, but he also thought that Shannon had a point and didn’t think it was his place to talk to Alan and Annie about their sobriety. At least not when he was acting as Alan’s doctor and so he had tried to let things go.

Except something he had to tell Alan was that Dr. Gordon would be operating on him and not Scott. But Annie didn’t understand why an outside doctor would have to be brought it when Scott was there and at the top of the cardio field. So she later confronted Scott about why he was avoiding his former sponsor and she told him that he had to forgive Alan eventually. She said that Alan should have had Scott’s back and as his sponsor he shouldn’t have poured him a drink though she reminded Scott that it had been his choice to take it and that had never owned up to his own responsibility in what happened. And so she quoted the program at Scott.

Annie told Scott that he had turned his back on his sobriety and that he was facing the same demons as Alan. Though Scott wasn’t sure about how he felt and he had planned on ignoring Alan’s problem until Alan went into cardiac arrest. So that’s when Scott put his own problems behind them and chose to immediately save Alan’s life yet Anne in the meantime chose to talk to Jordan and the first thing she did was apologize. She said that she was in love with TC and that’s why she had always lashed out against Jordan so she apologized for her past behavior. She admitted that blaming everything going wrong in her life on Jordan had been easier than taking responsibility.

Yet, another thing Annie realized she had to do was back break up with Scott. She later told him that they were recreating problematic behavior rather than dealing with things. So they both agreed to go their separate ways and, afterwards, she had killed herself because she thought it was time to let go of everything and not just her relationship with Scott. And so tonight was a tragic episode with no happy ending and even as TC thought he was doing good he was told, by Amira, that he might have led American soldiers into a trap by bringing the little boy and his mother to the US military base,