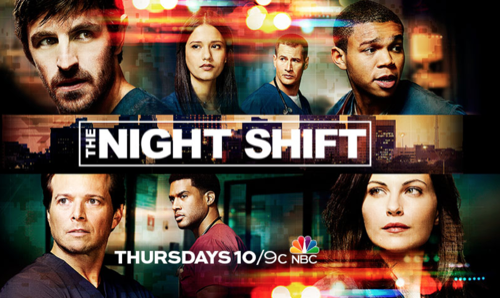 Tonight on NBC their new drama The Night Shift airs with an all new Thursday, August 10 season 4 episode 7 called “Keep the Faith,” and we have your The Night Shift recap below. On tonight’s Night Shift episode as per the NBC synopsis, “Multiple veterans are injured and brought to the hospital. Also, a politician from Drew’s past triggers flashbacks to his time in Iraq; Paul and Shannon must improvise while tending to a former POW; and a fearless photographer is treated.”

Mac didn’t make it. He had succumbed to his wounds and had later died not far from the hospital. However, Mac’s family and friends didn’t want to say goodbye to him with sadness. They had wanted to honor his life and his great service to the country by sending him off like the hero was. So they had thought that they would be allowed to do that peacefully though some church group didn’t think they deserved even that. The church group was against gays and therefore they hated what Mac stood for which were acceptance and love.

Though this church group that believed they were following God’s will and so they hadn’t cared about Mac or what he stood for because all they wanted was publicity. The church was getting into people’s faces and streaming their hate for the whole world to see. So eventually one of them decided to up the ante and they told Mac’s mother that her son was going to burn hell for helping the sodomites, but Drew didn’t take that lying down. Drew punched the guy that said that and that set off a brawl.

People started throwing punches and anything they had on hand. But everyone had gotten dragged into the brawl and that several bystanders like the senator. The senator was a vet and he had gone to the funeral to get photos of him trying to calm down the angry mob outside yet someone had punched him to the ground and another had hit him with a flag pole that partially broke off into the senator’s back. So the senator had made sure that they were photos of him and everyone getting taken to the hospital because he thought that would win him sympathy.

Senator Xavier Arnold was running for governor and he had hopped of the hospital bed the moment the cameras weren’t trained on him. However, the senator had wanted preferential treatment. He had been the one to ensure the hospital received what they needed to treat vets and so he said the hospital should do whatever he asks. Beginning with being treated first and no surgery. He said that he had to go to a debate afterwards and so he just wanted them to pull the thing out of his back as fast as possible.

So the senator picked TC to pull the eagle out of his back. He had found out TC was a ranger and therefore put his trust in a fellow vet to treat him. Though rushing through things and not having the advised surgery had been a mistake. TC had carefully pulled the thing out and then the senator began suffering from headaches because he was bleeding spinal fluid. So Scott had taken over from there and he said that he had enough with people do whatever they want at the hospital. He hadn’t approved of TC coming back to work on patients and he hated Paul’s suggestion about another case.

Paul and Shannon were treating another vet that complained of headaches and confusion. But their patient, Doug, had believed that a piece of shrapnel left in his head had been the cause of everything and so the doctors had checked him. They were putting him through an MRI when Doug freaked out and thought that he was back in a POW camp. So the doctors calmed him down and they did their best to treat him yet Doug didn’t have any shrapnel lodged in his head. He had a disorder that made him that was the case when it wasn’t. And so Paul thought they should play along.

Paul suggested that they give Doug some anesthesia, a little cut, and that everything would work out. He said that Doug has been going through life for the past fifty years believing he had shrapnel and no one could find it however if they played along and told Doug they removed it then maybe Doug would finally be able to move on with the rest of his life. Yet, Scott hadn’t wanted to take that risk.

Scott said that the patient would still be open to complications and that they would be liable if anything were to happen because of that “small” cut. However, Paul and Shannon asked Scott to at least talk to the guy and that once conversation did help change Scott’s opinion. Scott had wanted to help Doug and he thought that first part to doing that would be showing Doug how many people he inspired with his story. So Paul had wanted to know now what and as they were figuring that part out – Drew had snapped.

Drew had apparently been at the infamous battle that Senator Arnold was taking credit for and he knew the truth. He knew that the senator had been part of a convoy that was supposed to provide backup and that they showed ten minutes later than expected when the battle was practically over and Drew’s friends were dead. Though that part of the story never actually made it into the press and so the senator has been allowed to pretend that he was a hero. So Drew eventually had enough of that and he had wanted confront the senator with TC.

TC knew what it was like to serve and he had been just as angry about the senator’s fake record. But Jordan stopped the guys before they could do anything. She said that she understood where they were coming from and was upset as well yet that didn’t change all the good that the senator has done for vets and the hospital. So she told the guys to think about their actions because the consequences could extend beyond their own worlds. And so the guys took what she said under advisement.

They were angry and they did want to out the senator. Yet, they later chose to keep quiet and in exchange all they wanted was for the senator to hire a photojournalist. The photojournalist was a vet and she had gotten kicked out of service after she caught images of soldiers urinating on prisoners. So Ananya was given some excuse to leave and now she was going blind from her condition that wasn’t covered by the VA however if the senator gave her permanent employment then all was forgiven. Ananya had gotten a bad deal yet she was also a fan of the senator.

So the senator took the agreement and he gave Ananya the job that would cover her under his insurance. However, as the day went on, Scott decided to fake the procedure for Doug and as it turns out Doug had surprisingly realized that he didn’t need them to do it. He checked himself and he left behind the message “Keep the Faith” which was something soldiers say to each other that meant keeping fighting on. And so the hospital was finally came to it senses after everything and things returned to normal.

Though there was one thing that was different. Kenny had treated one of the protestors and he had ignored Cain orders because he hadn’t’ wanted to treat the guy. So the patient nearly died on their watch, but Cain was able to fix what Kenny neglected and he covered for Kenny. He said that he knew what happens when passions run high and so he didn’t mention a thing to Scott and funnily enough Scott had had new for them. He said the protestor was actually an FBI Agent on the Hate Crimes Task Force and that he had been undercover with the church as a way to take them down. And so Kenny learned something after all this – he learned that he wasn’t there to judge anyone.