The Originals Premiere Recap 3/17/17: Season 4 Episode 1 “Gather Up the Killers” 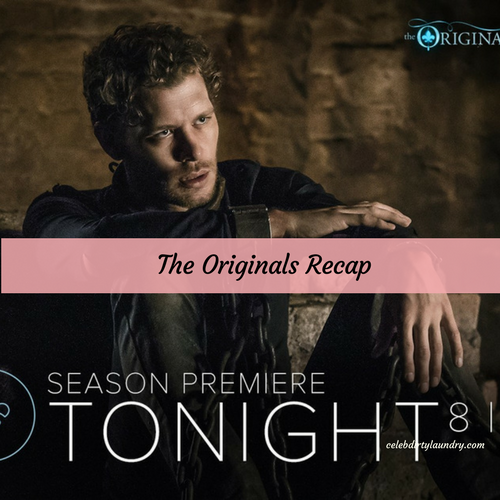 On the CW their drama, The Originals premieres with an all new Friday, March 17, 2017 season 4 premiere called “Gather Up the Killers,” and we have your weekly The Originals recap below. On tonight’s episode as per the CW synopsis, “Season 4 begins. On the fifth anniversary of Klaus’ (Joseph Morgan) defeat, Marcel is king of the city and welcomes the un-sired vampires to New Orleans, only to find they pose an unexpected threat to his rule, which leads him to seek counsel from an unlikely source. “

Tonight’s The Originals recap begins now – Refresh Page often to get the most current updates!

The Originals begins tonight with Vincent (Yusuf Gatewood) talking to his coven and people, saying it has been 5 years since the fall of the Mikaelsons. It has been 5 years of peace, but it didn’t come without sacrifice and they earned it.

They have fought hard but this week as they celebrate their independence, they will be challenged by Vampire visitors from all over the world who want to see, first hand, the suffering of Klaus Mikaelson (Joseph Morgan).

He warns them that the out of town vampires don’t follow their rules nor their sense of peace; Marcel (Charles Michael Davis) listens to Vincent from the corners upstairs. Vincent reminds everyone they need to keep those monsters buried or they will lose it forever.

After revealing that Hayley Marshall (Phoebe Tonkin) is off limits, Marcel learns Allistair (Neil Jackson) is after her, believing she can lead him to the rest of the Mikaelsons. Alistair is coming to collect some of Klaus’ blood to track down his siblings and child.

Hayley goes to the attic to see Elijah (Daniel Gillies), while her daughter, Hope (Summer Fontana) is coloring on her bed. Hayley tells Hope to stay inside, when she goes outside to see Mary, Jackson’s grandmother. Hayley promised her daughter to have a home where people will love and protect her. Hayley says she can’t do this on her own, her daughter has Mikaelson blood and has their enemies too.

Marcel meets with Vincent, asking him about what he has heard; tells him to find out who is stirring up trouble and tell them to stop. As Marcel walks through the cemetery he sees a snake symbol on one of the walls, where he visits Klaus to talk. Marcel lights some candles and is shocked Klaus isn’t very chatty.

Marcel came for information regarding Alistair, he needs Klaus’ help to get this guy in line rather than kill Alistair and start a war. Klaus says he is a very vain person and Marcel could find him quite valuable. Meanwhile, Hayley says goodbye to Hope, telling her to listen to Mary and she will be back very soon and not alone.

Mary tells her to keep her guard up, and any sign of trouble run. Mary taps on the back of the truck saying those people (meaning the Mikaelsons in coffins) have lived a long life and she hasn’t; so to be careful.

As the city prepares for the Eurotrash Vampires to take over the city for the week. Kol (Nathaniel Buzolic) tells Vincent Maxine (Karen Kendrick) has the hots for him, she invites him over for dinner. Meanwhile, Marcel finally meets Alistair, after they exchange gifts, he says he cannot be truly free since his maker is keeping him oppressed.

Alistair wants a drop of Klaus’ blood to confirm that the entire Mikaelson family is linked and if Klaus dies, his whole family will. He threatens Marcel that if he doesn’t do it he will release vampires on the city. Marcel says they shall settle it tonight at the Mikaelson’s compound.

Hayley arrives in Austin, Texas, where she sits at a bar. She approaches Keelin (Christina Moses), who says she is celebrating her medical residency. When Hayley confronts her on who she really is, she tells her to back off. They both show that the other is a werewolf and Hayley says to meet her outside and it’s important.

Alistair is entering an elevator, when he receives a message stating they found the girl and Hayley Marshall; he orders to kill them both. Once outside, Keelin tries to knock out Hayley, but being a hybrid she meets her around the building; when she overhears the men looking for them, she knocks Keelin out and runs off with her, saying they don’t have time for this.

Marcel comes to see Klaus again, who realizes this was Klaus’ plan all along. For Marcel to be king, and an outsider challenge his rule with no one to council him. Marcel says they have learned that all the Mikaelsons are linked to Klaus and Marcel’s love for Rebekah (Claire Holt) is what’s saving Klaus right now; when Marcel says the witches will kill his whole family with one drop of blood including his daughter, Hope.

Klaus tells Marcel he needs his help to defeat Alistair. Klaus asks for Marcel to release him and he will lay waste to the whole lot of them. Marcel nods as he approaches him.

Hayley tells Keelin the only way to survive is to do exactly what she says. When asked when she is doing this is she says she is trying to save her family, and one of the vampires, Freya (Riley Voelkel) in the coffin is also a witch who told her how to wake them up early and that is why she needs her venom. Hayley agrees to let her go if she gives her what she wants.

Marcel tells Vincent he needs to be there. He needs a boundary spell of original strength. Back in Texas, Hayley stabs Freya in the chest and she awake instantly; but they must work fast before the rest die.

Hayley hands her everything they need but they have 1 hour to save her brothers. Freya isn’t sure she can do it because it will need all her powers. Hayley goes to deal with the intruders.

Alistair arrives with all his people at the Mikaelson compound. Marcel brings Klaus in, he hands Alistair the sword back with his venom on it to get the drop of Klaus’ blood he needs to destroy the whole family; as Hayley fights for the Mikaelson family in the warehouse where Freya is trying to revive her brothers.

Alistair taunts Klaus about the suffering his wife and child suffered. The people around the circle are telling him to kill Klaus. He says that Klaus wants to hear his last words, that he will find his lovely daughter and eradicate her from this earth.

He is about to cut Klaus’ head off but Klaus uses the chains to take him down. Klaus stabs one of his men with the very sword Alistair gave Marcel. Klaus says, “meet your maker!”

Marcel then knocks Klaus out saying he keeps him alive for his blood to keep the wolves in line and as collateral against his family. Marcel claims to be the only one who can keep him from coming after all of them. Marcel tells everyone to enjoy his city and to never question him again; he then offers for them to all celebrate.

Freya continues her spell while the men continue to outnumber Hayley. When one of them tells her to give up, she says she has a better idea and turns into a wolf, ripping them apart.

Freya brings her concoction and pours it on the bite on Elijah’s (Daniel Gilles) arm. Hayley turns back to a human, asking if they want some more, but before she can do anything someone or something kills the rest. As she stands naked, Elijah stands behind her, she kisses him and he holds her tightly.

Marcel speaks with his informant, as everyone is celebrating. She tells him every vampire in town either loves him or fears him, now he only needs to worry about the covens. She tells him occult graffiti is showing up all over town including the quarters.

Vincent goes to see Klaus who warns there will be enemies flocking to New Orleans causing all kinds of mischief, but when he escapes he will be seeking his own justice on Marcel and Vincent. Vincent brings up Cami and how she had always believed there was something good in him and doesn’t understand why Klaus is so hell bent on proving her wrong.

Back in Texas, Keelin asks to be let go but Freya says if her family is ever bitten again, she will need more, which means they will need her alive. Freya reminds her she had a deal with Hayley, not her. Freya says when it comes to her family’s safety, she doesn’t negotiate.

Hayley sees that Elijah’s infection is gone and after all this time, they still love each other, even without saying it. He wants to know how his niece, Hope is doing. She says she is happy and healthy and the perfect little girl. She also made Hayley promise she would one day get her family back; all of them. Elijah says she is a child after his own heart. Hayley says there is only one left and Elijah tells her they will go get him.

Marcel comes to visit Klaus. Klaus says he needs him, if not for anything else than to make sure he doesn’t become the monster he is. Klaus says Marcel cannot escape the shadow he’s cast. When Klaus leans in to tell him that he is weak, Marcel stabs him with the rib knife.

Maxine comes to find Vincent who tells him that her son Adam never came home and she has looked everywhere. Adam is walking through the quarters and sees some of the occult drawings, he is drawn into the drawing and screams.

Hope wakes up from a bad dream and Mary holds her as papers with her drawings of all the occult symbols lay around her room.