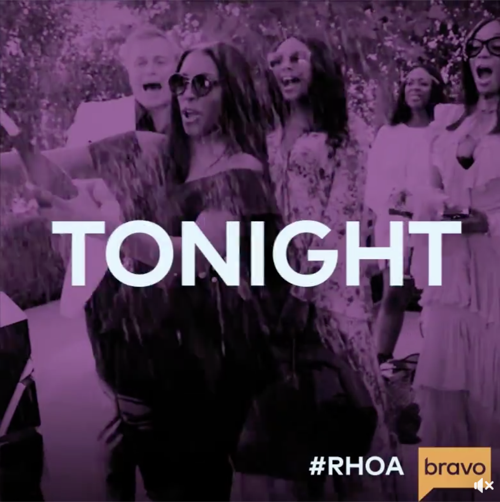 Tonight on Bravo The Real Housewives of Atlanta premieres with an all-new Sunday, November 5, season 10 episode 1 called, “50 Shades of Cynthia,” and we have your The Real Housewives of Atlanta recap below. On tonight’s RHOA season 10 episode 1, as per the Bravo synopsis, “Kenya returns home from vacation with big news but quickly learns that her secret is already out. Despite the explosive rumors from last year, Kandi shows no signs of defeat as business continues to boom at the OLG restaurant. ”

The ladies of Atlanta are back as The Real Housewives of Atlanta gear up for another season of love, friendship, backstabbing, secrets and tea spilling. There are guaranteed to be some surprises, old beefs and plenty of secrets to be told as the ladies let it all hang out in Atlanta. What will happen? Let’s find out as the season starts tonight!

This week on the season premiere of Real Housewives of Atlanta Kandi’s restaurant, OLG, is doing fantastic business. Kandi is stunned at how well the restaurant is doing. She greets everyone as she walks in and people are excited to see her. She sits down with Todd. He asks her “Are you overwhelmed or do you have it?” She tells him “I don’t have a choice but to have it all together.” In addition to working on the restaurant Kandi is also planning a reunion with her old band Xscape.

Cynthia has celebrated 50 by buying herself a new house. Her first visitor is the glamorous NeNe. She is planning a 50 Shades of Cynthia birthday party. She tells NeNe “We have a lot to celebrate because Kenya is officially married.” NeNe is shocked. She tells Cynthia “I’ll believe it when I see the marriage license.” NeNe is not believing any of it. She asks Cynthia “How long has she known him?” Cynthia says “8 months.” Nene doesn’t believe her so Cynthia says “Four months.” Cynthia tells her “Well it’s been some months.” NeNe laughs and then asks “What’s his name?” Cynthia says “Well Kenya calls him baby.”

When the doorbell rings the object of their discussion breezes through the door. NeNe asks “So are congratulations in order?” At first Kenya dips and dodges and tries to avoid the question. Then she finally comes clean and admits that she has indeed gotten married. Cynthia congratulates her. She asks Kenya “Why wasn’t I invited?” Kenya tells her “We eloped and didn’t invite anybody.” The ladies want to know her husband’s real name. but Kenya seems determined to keep his identity a secret. She tells them “I don’t want anyone who is always looking to be negative around my husband.”

Porsha and Lauren are working on her Podcast. They share letters from people. She reads a letter asking about involving friends and family in your business. She responds “Don’t ever involve your friends in your business.” Once the podcast is over Porsha tells Lauren “Phaedra reached out and wished me a Happy Birthday.” Lauren is not happy to hear this. She says “You’re talking to Phaedra again?” Porsha lets that go and tells Lauren “I haven’t spoken to Kandi since the whole incident.” Lauren is surprised to hear this. Porsha says “I know Kandi needs time to let the wounds heal so I am willing to give her that.” Lauren says “Let’s have a toast. Cheers to family. No new friends.” The sisters toast to that.

Sheree visits NeNe at NeNe’s store Swag Boutique. The two ladies sit down and NeNe asks her “Have you met Baby?” Sheree says “Who?” NeNe tells her “Kenya’s husband. She’s married now.” Sheree says “Good. It’s about time she gets a man. Show him off so that we know you can get a man without paying for him.” The two ladies move on to talk about the situation between Phaedra and Porsha. NeNe says “I wonder why Phaedra isn’t speaking to me.” NeNe also says “I gave Porsha some advice and I feel like she didn’t appreciate it.”

Kenya calls her dad and addresses her elopement. Her dad says “I have to hear about your marriage on FaceBook.” Kenya tells him “We just went away and did it.” Her dad says “I was upset.” Kenya was worried that her dad wouldn’t be able to control himself and might offend her husband. She apologizes to her dad. He tells her “I just wanted to be there to walk you down the aisle. I am happy for you though and congratulations.” Kenya thanks him feeling relieved.

Porsha meets Sheree at Sonny’s Hair Shop. The two ladies talk about Cynthia’s birthday party. Sheree tells Porsha “We are all supposed to come as different versions of Cynthia.” Sheree asks Porsha “What is up with you and NeNe?” Porsha says “From my point of view she has been coming for me over the last two years. She has done interviews saying that she wants me fired from my job. Didn’t she mention any of this to you?” Sheree says “No, she didn’t. She did say that she had given you that advice.” Porsha says “Well this sounds like a new NeNe. You’ll have to introduce me to her at the party because I don’t know this NeNe.”

On the day of the party Cynthia is getting ready with her daughter Noelle are getting their hair and make up done. Noelle asks her mother “Did you invite Peter to the party?” Cynthia says “I sent him an invite, but he never responded.” She pulls out her phone and calls Peter. When he picks up he sounds a bit strained. Cynthia asks him “I sent you an invite to my birthday party. Are you coming?” Peter tells her “I can’t make it.” Cynthia asks why and Peter tells her “I’m in Charlotte and it’s really busy here.” Cynthia sounds kind of sad as she says “This will be the first birthday without you.”

The guests begin to arrive and everyone looks fabulous. Kandi and NeNe have even managed to make peace. Kandi wants to know about Kenya’s husband. She asks Kenya “What’s his name?” Kenya says “Baby.” Kandi feels a bit hurt that Kenya didn’t tell her about the wedding.

Cynthia looks stunning in a beautiful, yellow dress. She has all the ladies walk out representing their 50 shades of Cynthia and Cynthia awards the prize to Kandi. There is still shade being thrown at the party. The unresolved issues between Porsha and NeNe and Kandi and Porsha are causing major tension. NeNr moves in to address her issues. NeNe tells her “There are lots of things that were done that as a friend I feel shouldn’t have been done.” Porsha agrees. She tells NeNe “The most recent of these things was three weeks ago.” NeNe seems shocked that Porsaha is calling her out. Sheree tells NeNe “ Porsha says that you were on a show and that you said that you should be fired.” NeNe said “I never used the word fired.” Sheree says “If it’s not gonna be a real conversation then we should drop it.” Porsha said “The door is closed.” Porsha asks “Why did you lie to Sheree?” NeNe says “I didn’t lie to Sheree.” Porsha says “You were on that show and you said you wanted me fired.” Nene is pissed and storms off deciding to leave the party.