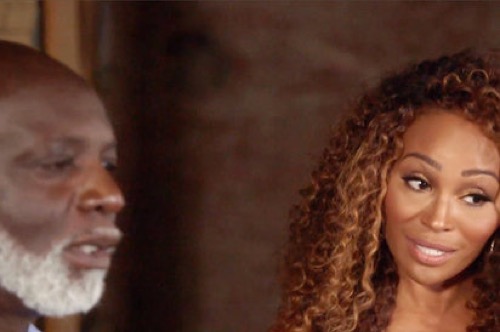 Tonight on Bravo The Real Housewives of Atlanta premieres with an all-new Sunday, December 17, season 10 episode 7 called, “Rock the Boat,” and we have your The Real Housewives of Atlanta recap below. On tonight’s RHOA season 10 episode 7, as per the Bravo synopsis, “Cynthia and Peter reunite to discuss business moves in Atlanta, while her date on a boat with Will gets rocked when Kandi and Todd go fishing for the truth. Meanwhile, Porsha embarks on her first blind date and Kandi confronts the challenges of raising a teenager as she tries to enjoy some much needed family time. ”

Cynthia invites Kandi and Kenya over to her house for a sit-down. Kenya tells them “The funeral was ok. I was ok at points, but when they started the final goodbyes I lost it.”

Everyone is discussing the trip to San Francisco. Cynthia tells Kenya “Everyone was at the table talking about your husband and asking why I haven’t met him yet. Honestly, I would love to meet him and have dinner with him.” Kenya says “You’ll get to meet him. It’s not like I’m trying to keep him a secret.” Cynthia says “I want us to take a selfie together.” Kenya laughs.

The ladies move on to talk about Sheree’s new man. Kandi asks “Have ya’ll seen the pictures online? Sheree is wearing a t-shirt that says wifey.” They all laugh and Cynthia says “Nene knew him too. He went to jail for scamming people out of a lot of money.” Kenya and Kandi both look shocked and then they laugh. Cynthia then says “I hope Sheree doesn’t have to wait too long for her boo to get out of prison so she can be with him.”

Porsha and Dominic are at the house when two dating consultants named Katherine and Jennifer show up to try and help Porsha find a man. They tell her “We just want to hear about your background and your dating history.” They ask her “What do you want to do differently now?” Porsha says “I want someone who wants a family and who is calm. I also am ok with dating outside my race.” They also want to know what she looks for as far as how a man dresses and facial hair. Then they ask her for a tour of the house to get a better idea of the house. When they see how prepared she is for children Katherine tells her “Being this prepared might make a man’s wiener go down.”

Cynthia meets up with Peter to discuss some business arrangements. When they meet up at the building Cynthia is not impressed. She asks him “When do you think the doors are going to open?” Peter tells her “Four months.” Cynthia asks him “Is this a sure opening and not a soft opening?” Peter assures her it is. After the contractor leaves Peter tells her “I follow you on social media. I was hoping to see some shots of your new boyfriend.” Cynthia kind of backs off and tells him “I don’t have a boyfriend. There is someone that I’m dating and his name is will.” Peter laughs and says “So your new boyfriend’s name is Willie huh?” Cynthia just laughs.

[2017-12-17, 9:02:18 PM] Latrese Garner: Kandi and Todd are hanging out with the family and having a family day. They have hired a swimming coach to give Ace swimming lessons. Kandi is worried that she is failing as a mother because she is busy meeting all of her commitments.
Sheree’s daughter Callie is going off to college so before she goes Sheree tells them “The National Coalition for Domestic Violence has asked me to be a speaker.” She tells them “I know you guys have seen the stories on the internet. I wanted to know how you felt about it. I tried to shield you and put on a happy face. Now I need to know how you feel.” One of her daughters tells her “Dad tried to talk to me about it, but I didn’t know what to say so I just drove off.” When Sheree asks her son Kyro he tells her “I don’t know what to think. You never said anything.” Sheree tells them “Talking to you guys is probably the hardest thing I’ve ever done, but I want you to understand that abuse is not ok. Some girls think that if he hits me he loves me and that’s not the truth.” The children tell her that they support her and love her.

Kandi is taking Riley indoor skydiving. Kandi tells her “I’m glad we were able to come and do this because we need to do this more often.” Riley tells her “There’s never any time. You’re always so busy.” Kandi says “I sense some resentment there.” Riley says “You schedule stuff but then you have to cancel because of a work event.” Kandi promises her daughter that she is going to try and do better about keeping her commitments to spending time with her family.

Cynthia is surprised when there is a knock at her door and a driver tells her that he is there to pick her up. She tells him “I didn’t order a driver.” He tells her “I was sent to pick you up.” When she arrives at the boat Will is waiting for her. Cynthia has invited Kandi and Todd out with them. Kandi is a bit suspicious of Will. Will tries to win Kandi and Todd over. He tells them “I know that you don’t know me very well.” Kandi speaks up. She says “You were on the Steve Harvey show for dating.” Will acknowledges that he was. Kandi goes on to say “I have a friend that was shooting a pilot for a dating show and she says that you were on that show too.” Will says “I never expected to be on that show and it wasn’t a big deal.”
Porsha is headed out for her blind date. She finds out that his name is James.

Eventually, Kandi tells Cynthia “He seems like a great guy.” Cynthia tells her “I don’t want to have sex with him too early, but I also don’t want to do it and it’s really bad!” Kandi says “Check out his hands and you’ll know what he’s working with.”

When Porsha comes face to face with James she is not impressed. She tells him “My mom is staying with me and so I can only stay for 30 minutes.” The two exchange small talk and end up doing a Sake bomb. Porsha’s phone is constantly buzzing. James asks her “Is that your mom?” Porsha tells him “Yeah it is.” The two quickly call it a night.

Sheree meets with her life coach Jack and tells him “I did have the conversation with the kids.” He asks her “How did that go?” She tells him “I feel much lighter.” While they are talking Sheree gets a phone call from Tyrone. She steps outside to have some privacy while she takes the call. He tells her “I was thinking about the last time I called you. The reason I didn’t call you was because the feds were coming and I didn’t want to involve you.” Sheree tells him “I understand and hearing you be honest makes me feel better about us.” When she steps back into the house she tells Jack “That was my boyfriend. “ Jack says “That explains the glow.” Sheree goes on to tell him “He’s in prison. He hopes to be home by the end of the year.” Jack asks her “Are you worried?” Sheree says “Nope. He’s the love of my life.” Jack then hits her with a sobering question. He asks her “What if he doesn’t get out? Will you lose the love of your life?” Sheree doesn’t have an answer for that, but she looks pensive as if she never considered that possibility.