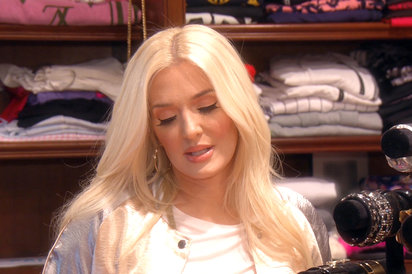 Tonight on Bravo The Real Housewives of Beverly Hills airs with an all new Tuesday, January 3, season 7 episode 5 called “Amnesia Appetizers” and we have your RHOBH recap below. On The Real Housewives of Beverly Hills season 7 episode 5 as per the Bravo synopsis, “Female rejuvenation is the topic for Lisa Vanderpump, “Kyle Richards and a plastic surgeon. Also: Lisa Rinna and Erika Girardi meet Eden Sassoon, daughter of hairstyling luminary Vidal Sassoon; Dorit hosts a dinner bash and tensions rise at a luncheon at Camille Grammer’s house.”

On this week’s episode of Real Housewives of Beverly Hills Erika is working with her creative director Mikey. She shows him the underwear that Dorit bought for her after the incident where PK looked up her dress. Mikey says “Who would wear these under a Mood Wear dress?” Erika says “Who would wear any underwear under a Mood Wear dress?” Mikey says “If it was that big of a deal then her husband should have said something.” Erika laughs and says “Dorit is the type of woman who takes all the fun out of hanging out with cool women.”

Dorit and pk are preparing for a party. She has on a beautiful red dress. She asks her husband “How do I look?” Do I look appropriate?” He says “Compared to Erika Jayne you look wonderful.” Dorit says “At least I have on underwear.” The guests arrive for the dinner party and everyone is seated for dinner. PK asks Lisa Rinna “Do you ever analyze and say I shouldn’t have said that?” Lisa Rinna says “Yes. When I was here at Dorit’s party I said something to Lisa Vanderpump and I thought maybe it was me being too hard her.”

TK tries to analyze the situation between the two Lisa’s. Lisa Rinna tells him “I let go of the situation with Lisa Vanderpump a long time ago. I don’t think she has let go of it.” She goes on to explain to him about the loss of her father and she tells him “I was with him as he was dying. When you are with someone as they are leaving this world it changes your perspective.” PK continues to try and tell Lisa Rinna how she is wrong in her handling of the situation with Lisa Vanderpump. Lisa Rinna says “This man is trying to tell me how to act and feel and it is causing me to shut down.”

Lisa goes on to tell the group “Eileen lost six people during the time that all of this was going on. She only told me and a couple other people and asked me not to tell anyone.” Dorit says “It’s weird that she would not want to share that news with people.” Lisa says “Not really. She wanted to go to the reunion, speak her truth and then bury her mother and grieve in peace.”

Mauricio comes home from Italy and Kyle is happy to see him. He tells her “I got a speeding ticket in Italy.” She is shocked to hear this. He tells her all about the business developments in and Kyle tells him what is happening with the kids.

Eileen and Vinnie are sharing a glass of wine and she tells him about the text she recieved from Lisa Rinna about the incident at the dinner party. Eileen says “I don’t know why PK and Dorit have an opinion on the death of my mother and Lisa’s father. It’s like they want to rewrite history that they weren’t even a part of.” Vinnie says “We all know what happened. We were there, but it seems like they start drinking and they want to make up excuses for Lisa Vanderpump’s behavior.”

Lisa Rinna and Erika are taking a pilates class with Eden Sasson at her studio. Lisa Vanderpump and Kyle are at the tanning salon. Kyle says “I want to look good for my husband and my children. That means fighting it every step of the way. When that magical day comes will I have a facelift? Probably.” They both have chemical peels. Meanwhile Lisa Rinna and Erika endure a grueling pilates class. Erika says “People are under the mistaken impression that just because you have tons of money you don’t have to work to maintain your body.”

Eileen and Dorit head out for their beach walk. Dorit seems obsessed with the whole underwear thing. She says “I have seen enough hoo-hah for one lifetime.” Eileen and Dorit exchange pleasantries. Eileen says “How did you enjoy the escape room?” Dorit says “I liked it, but Erika seemed a little lost.” Eileen tells her “She was blindsided because she felt like everyone was in on the joke but her.” Eileen then goes on to address the incident that happened at Dorit and PK’s dinner party. Dorit says “I don”t even remember what happened.” Eileen tells her “It was brought up that I should have told the ladies that my mother died.” Dorit continues to play dumb and says “I don’t even remember your name being mentioned.” Eileen tells her “Well Lisa Rinna says that it was.”

Eileen tells Dorit “You mentioned that Lisa’s father’s passing and my mother’s passing affected how we handled the situation with Lisa Vanderpump. Our parents passed months and months after the incident.” Dorit seemed a bit dense to the point Eileen was trying to make so Eileen clarified it for her. Once they finally got on the same page they were finally able to go on their walk.

Lisa sits down and talks with Eden Sasson and Erika. Eden tells them “Kyle’s sister and my sister did their first movie together.” Lisa Rinna says “You know what we should do? Kyle is having a game night at her house. You should come.” Eden seems very excited about the invitation.

Kyle meets uo with her daughters Alexia and Farrah and her husband to have lunch. They are preparing for a father daughter trip. Kyle says “Alexia goes to school in Boston so it is great to have her here and working with her dad this summer.” Mauriccio says “When you get busy you like to put it off on me being busy.” Kyle says “Here is the difference between a man and a woman. I take care of you and the kids first.” Mauriccio says “That’s right. That’s why you have to accept me being busy.”

Eden is having a housewarming party. Dorit, Erika, Kyle and Eileen show up. The ladies make their way outside. As they are sitting around Eden brings up Erika’s video shoot. Erika just kind of brushes it off. Eileen tells the group “Erika has a number one single.” Eden congratulates her and Erika thanks Eden. The ladies talk about being forty. Erika says “What comes with being forty for me was a sense of freedom.” Dorit decides that this is the time to bring up the conversation that she had with Eileen about the situation with Lisa Rinna and Lisa Vanderpump. Eden tries to interject herself.