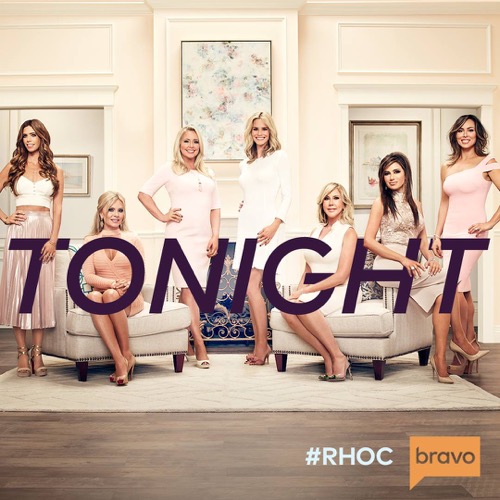 Tonight on Bravo TV the original housewife series, The Real Housewives of Orange County returns with an all-new Monday, July 10, 2017, episode and we have your RHOC recap below.  On tonight’s season, 12 premiere called, “The Great Divide,” as per the Bravo synopsis, “Vicki expands her business and Tamra reunites with a friend in the Season 12 premiere. Also: Shannon struggles with her weight and her marriage; Kelly worries about her mother; Meghan returns to the O.C.; and Lydia tries to reconnect Tamra and Vicki.”

The ladies of the OC are back and at it again with a new/old cast member. Lydia is rejoining her old OC cast mates. What does this season have in store for our favorite OC housewives? It starts tonight with the season premiere!

Shannon and the Badors have moved into their new house. They have gotten themselves a new dog and named him RT. Shannon is preparing dinner and she is worried because she has put on some weight. She says “Last year an allegation was put out there about my husband. It caused me to eat more and gain weight.”  Shannon is really upset because David is being really distant toward her.

Vicki is expanding her business. She says “I started the insurance business in my home office and now we are moving to a bigger office.” She is talking with Kelly about Tamra. Kelly tells her “Shannon and Tamra were mean to you. They owe you an apology. They are looking for a reason to fight.” Vicki says “They aren’t the popular girls. We’re the popular girls.” Kellly says “I don’t care about being popular.” Vicki says “I do!”

Tamra is still struggling after the fight with Vicki. She gets a text from Lydia inviting her to bible study.  When Tamra arrives the two ladies are excited to see each other. Lydia asks her about everyone. Tamra tells her “I haven’t seen the inside of Heather’s house except on Instagram and I haven’t spoken to Vicki in eight months.” Lydia is shocked to hear this. She says “You guys used to be so much fun. What did she do, if you don’t mind me asking?” Tamra gets very emotional. She says “Vicki spread some very nasty rumors about my husband and hurt me badly.” Lydia seems shocked.  She asks “What kind of rumors?” Tamra says “She said that he’s gay.” Tamra then says “Kelly Dodd is a whole nother mess.” Lydia says “I pray for Kelly every day.” Lydia also tells Tamra “I think we should all go out to lunch.” Tamra looks shocked. She says “I don’t think Vicki would want to go out to lunch with me.” Lydia says “I’ll call her.”

Meghan and Jim are enjoying new parenthood. They’ve had a beautiful baby girl. Meghan says “Jim is a good dad. To see him melt in front of this baby makes me fall in love with him all over again.”

Tamra is enjoying Bible study with Lydia and the other ladies. Lydia asks “Was there a time in your life when you felt abandoned by God?” One of the ladies opens up and talks about her desire to be a mother. This opens up Tamra’s floodgates and she breaks down as she talks about her daughter not being part of her life. She says “Things are better now. We have been texting. I feel some hope that we are going to get back together.”

Vicki is preparing for a date. She is pretty nervous about the date because of her past mistakes. His name is Steve. He is in her kitchen while she puts the flowers in a vase. Then she manages to spill a jar of sauce on him. The two of them laugh. As they sit down to dinner she tells him “I told Brianna that we were both damaged goods.” He laughs and says “Why is that?” She says “Because we both have failed marriages.” Vicki says “My one biggest fear with Steve is wasting another five years.”

Kelly is getting ready to go out. She asks her mom “What are you planning to do tonight?” Her mom says “I don’t know..”  Kelly is worried about her mother becoming a hermit. She asks her “Don’t you want to have someone to go to dinner with?” Her mother says “No, because I have a bad taste in my mouth after being married for 30 years.” Kelly says “I want to go to the senior center with you.” Kelly’s mom seems exasperated. She says “OK fine.”

Briana and Vicki are playing with the boys trying to get them dressed. Brianna is really missing her husband Ryan who is waiting for his medical retirement from the military.  Vicki tells her daughter “Steve is so nice, but I don’t want to be divorced again.” Briana says “What are you waiting for?” Vicki says “I just want it to be perfect.”

Tamra wants to redecorate the gym. She wants to spray paint the walls. She tells him “ I was at bible study with Lydia. She asked me if I would go to lunch with her and Vicki. What do you think?” Eddie says “I don’t think you should go to lunch with her.” Tamra says “You’re right. She lied about Cancer. If she’ll lie about her own life she’ll lie about yours.” Eddie agrees and says “You don’t need to be around that.”

Lydia and Doug are teaching their son Maverick to ride a bike in the backyard. She has three little boys, the newest of which is two-year-old Roman. After practicing in the backyard they take Maverick to the park he falls off the bike and has a major freak out, but Doug manages to get him back up and on the bike to try again.

Shannon is taking her daughter Sophie shopping for a dress and they meet up with Tamra. She is still a little sad about missing out on stuff like dress shopping with her daughter Sidney. Shannon is still upset about her weight. Tamra asks her “What’s going on with you?” Shannon tells her and Tamra asks her “Did you work out today?” Shannon tells her that she did. Tamra worries that Shannon is still hurting over David’s affair.

Lydia meets up with Vicki for lunch. The two ladies are happy to see each other. Lydia believes that she can help mend the friendship between  Vicki and Tamra. The ladies start reminiscing about old times. Lydia then tells her “Tamra told me that you said that Eddie was gay,” Vicki says “They accused me of being in on something that I wasn’t. Tamra has her own skeletons that she doesn’t want touched, but she feels like she can touch everyone else. I’m tired of being bullied. Either they start being nice to me or the gloves are coming off.”