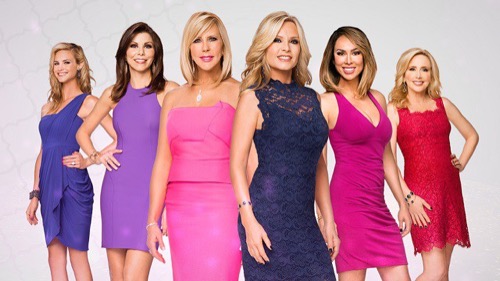 Tonight on Bravo TV the original housewife series, The Real Housewives of Orange County returns with an all-new Monday, July 24, 2017, episode and we have your RHOC recap below.  On tonight’s season, 12 episode 3 called, “The Not So Quiet Woman,” as per the Bravo synopsis, “Trust issues plague Vicki as she organizes her new office. Also, Peggy deals with her looming surgery; Tamra is thrust back into a past role; and Shannon confronts her weight gain as well as her nemesis, Kelly Dodd, who crashes dinner.”

This week on The Real Housewives of OC the argument between Shannon and Lydia continues. Lydia tells Tamra “I don’t want to hang out with someone like that.” Shannon is going bullistic while David is trying to calm her down. She tells David “I am nothing like Vicki Gunvalson!”  David asks “Do you want to get the girls and get out of here?” Shannon says “Yes. I’m done.” Lydia tells Tamra “I don’t think we should hang out on Thursday.”

Vicki is impressed with the progress of her new office. She has hired a new designer named Ali. He tells her “This is a place  that you can whoop it up in.” Vicki says “I want cameras that I can see on my phone and watch my staff.” Ali says “The staff has said that you haven’t been able to protect yourself because you’ve been too trusting so that’s what we’re going to create for you is insulation. Vicki seems happy with that.

Peggy and her husband meet with the plastic surgeon to check on her post mastectomy. She is waiting to get breast implants. Peggy says “Maybe I’ll go just a little bit bigger.” The Dr is talking to her about the size of the implants. He tells her “You need to mentally prepare yourself for what you’ll look like.” Peggy tells him “You helped prepare me for what I had to do. Thank you.” The Dr tells her “What you did was hard because your disease was minimal but you decided to take preventative measures.”

Lydia and Doug are working on Nobleman magazine. She tells him “I think you have gone over in page count. We have the family trip and the launch party.” While they are talking Tamra calls her.. She asks her “Can you explain to me what happened? Was I overreacting or what?” Tamra says “Shannon just reacted to you saying she is like Vicki.” She then asks if Lydia is still up for going to dinner. Lydia doesn’t sound to sure, but she agrees.

Tamra then calls Shannon and tells her about her conversation with Lydia. Shannon asks “Does this mean that dinner is on?” Tamra says “Dinner is on.” Shannon seems to be glad, but she is still not happy about Lydia comparing her to Vicki…

Meghan and Jim are in complete babyville. Jim is cleaning the house in Orange County. They are putting it up for sale because it is too much house. Meghan says”Ideallly I would live in a high rise with a doorman.” Jim is also preparing to leave for the start off baseball season.

Shannon goes to see a holistic specialist. She tells him “I am stressed because false allegations were put out against David and I didn’t want to hurt David.” Dr J^im says “You have to be done with it.” Shannon says “I am done with it.” He says “You have to be.” When she steps on the scale she is devastated when she sees her weight. He tells her “It’s not your weight that worries me. it’s your body mass.”

She asks him “What’s my body mass?” He tells her “It’s 40% At your age and wieght you are heading rapidly toward Diabetes.” Shannon is devastated. Dr, Tim says “How is your relationship with David?” Shannon says “I’m not even going to tell David. He’s physicallty fit. He works out all the time.” Dr. Tim tells her “Don’t worry we’ll get you fit again”

Peggy picks up Lydia in one of her cool sports cars and the two ladies head off to dinner  with Shannon and Tamra. Lydia tells Peggy “I invited my new friend Kelly, but she doesn’t get along with Tamra or Shannon either.” Peggy says “What is this getting along or not getting along?”  Kelly calls them while they are on their way to dinner and Lydia once again tries to convince her to come but Kelly is dead set against going.

Shannon reveals her weight struggles to Tamra and Tamra is really worried about her. When everyone gets to the restaurant tensions are high. Everyone orders drinks and Lydia says “I want to clear the air.” Shannon says “I feel like you and I got off to a really good start and then I felt attacked when you said I was like a certain person so I apologize if you felt like I attacked you.” Shannon then goes on to reveal that Vicki told people that her husband beat her.

The ladies sit down to order and Tamra tries to get Shannon to stay away from the red meat. Lydia invites Shannon to a party and she tells her “I have to warn you that Vicki and Kelly are invited.” Suddenly Kelly walks in. Everyone is shocked because she’d said she wasn’t going to be there. Everyone heads to the bathroom where there is a confrontation ensuing between Kelly and Shannon. Shannon says “I am not going to have you make me out to be a mean person because I wasn’t mean to you just now.”

Kelly says “I was here with my friend. My friends are here from Philladelphia and you know that this is my favorite bar.” Shannon is still pissed that Kelly dared show up and be mean to her while she was having dinner and after she tried to be nice and share something so personal about what has been happening with her over the past six months.  Lydia prays for Shannon in the bathroom while Shannon cries.

Tamra comes over and tries to talk to Kelly. Peggy seems to be amused at the women’s behavior. Shannon tells Kelly “I was surprised to see you here.” Kelly says “Why would you be surprised to see me here? I live right down the street.” The fight continues and Shannon says “You have been nothiing but a disgusting person to me. Move on.” Kelly says “I will,” Kelly storms off and then Tamra and Shannon storm off as well. Outside Lydia apologizes to Peggy and Peggy accepts. Tamra tries to calm Shannon down…