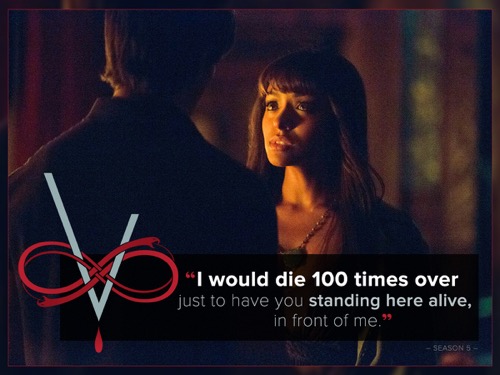 The Vampire Diaries begins tonight with Damon (Ian Somerhalder) laying grey on the ground where Elena’s (Nina Dobrev) coffin was. Cade (Wole Parks) arrives telling his soul that he shouldn’t speak to himself; Cade confirms he is sitting in limbo and asks him where the dagger is, Damon admits he doesn’t have it and the last he checked he wasn’t his errand boy any more; and he’d rather be dragged to hell than serve him for a second longer. Cade tells him he has something that might change his mind.

Stefan (Paul Wesley) comes to visit Bonnie (Kat Graham), who doesn’t want to hear anything he has to say. He apologizes and she tells him he killed Enzo (Michael Malarkey); he informs her that he is leaving town to at least attempt to atone for some of his actions. She wishes him safe travels and slams the door in his face.

Enzo tells her that was a bit harsh, but she says he earned it and she hates him. Damon comes to find Stefan packing, telling him that Kai (Chris Wood) screwed him over and kidnapped Elena’s coffin. Cade now has Elena but Kai tried to cheat the devil, kept an ace up his sleeve and now Cade wants that too. Damon asks him to wait because he needs his help.

Caroline (Candice King) catches the twins, Josie (lily Rose Momford) and Lizze (Tierney Mumford) trying on their flower girl dresses, causing Caroline to explain that even though people love each other, sometimes they don’t end up getting married; out of anger one of them starts a fire and Caroline learns this happened at school as well.

Kai is singing “Knocking on Heaven’s Door” and sits with Stefan at the bar, saying Cade gave him a new lease on life because he gave him Elena. Stefan reveals he is there because of what he didn’t give Cade. Kai tells Stefan the dagger is his insurance policy to keep him out of hell; Stefan says to give him the dagger and he will kill him himself.

Kai feels it’s not worth the risk; Stefan confronts Kai about being afraid of Cade, and Stefan isn’t. After Kai touches Stefan, he informs him that he is no longer a vampire, but human. Kai stabs the dagger into Stefan’s hand saying he can have it but just so he knows, when you kill the devil, hell goes with him. Stefan says Damon’s name who snaps Kai’s neck; saying he was busy requesting a song.

Caroline confronts Alaric (Matthew Davis) about the girls being kicked out of preschool. She shares that she doesn’t know if her and Stefan are going to last and put the stuff away. Alaric suggests they find someone to help them with the twins. Caroline says maybe her and Alaric are the problem, the girls are sensitive and have been through a lot; before she could continue Damon and Stefan arrive with Kai.

As Damon puts Kai in the cell, he wants to know why Caroline is helping him rather than spending time with Stefan. She reveals that Stefan needed to go on a spirit walk to see if he still wanted to be with her; Damon says Stefan feels like that is his only way of protecting her and probably doesn’t feel worthy of being her.

Kai knocks on the window and says they need someone who can explain to them what is happening to their Gemini coven twins, and points to himself. Stefan and Alaric argue because Kai is Alaric’s worst enemy but Stefan feels the priority should be Cade. Stefan tells him they need his help because his last name is neither Maxwell nor Donovan.

Enzo asks Bonnie is happy, she says of course; he wants to know why won’t she forgive Stefan. He says if she keeps holding on to hating him it will eat at her. Meanwhile Stefan and Damon arrive at the spot Cade requested them to go. Damon admits he knows why Stefan wants to leave town, thanks to Caroline. He admits that he loves her and doesn’t want to drag her down with him. Damon asks then why is he with him?

Stefan admits that Cade is free because of him; he compelled Matt (Zach Roerig) to ring that bell and that is why it needs to be him that kills Cade. Damon tells him it is suicide, and if he screws up they don’t know what he will do to Elena. Damon attempts to stop Stefan saying he won’t let anything happen to him or Elena and Stefan stabs him in the neck, knocking him out.

Caroline puts the girls to bed, who apologize about the dresses. She asks if they think they can cut that stuff out, asking for them to just try their best. Caroline goes to see Kai, asking why he would want to help the twins after killing their mother and wanting to kill them. He says Jo was the Glinda while he was a syphon, the one who was like an addict waiting for the next hit.

He says the girls’ magic is going haywire because they are in the armory that is filled with magic, its practically in the walls. He shows her that the magic actually is in the walls, when he shatters the window and he knocks out Caroline leaving her on the cold floor while the alarms sound.

Stefan has gone behind he waterfalls calling for Cade; he emerges saying he understands why both brothers love her; she is a beautiful soul. Cade plays no games and tells Stefan he knows he is there to kill him, although he was expecting Damon to be there. Stefan looks at his watch and at exactly 8, Alaric begins to ring the Maxwell Bell.

Alaric is in the middle of ringing the bell and Stefan stabs him, but Alaric gets a call from the twins saying they heard a loud crash and they don’t know where mommy is. Alaric tells them to hide and leaves the bell. Cade begins to beat Stefan but Damon says he made a deal and he has the dagger so now he needs to pony up. Cade tells him he will give him one soul.

Cade sets Elena’s coffin on fire, causing immense pain for Bonnie who realizes through their psychic connection, Elena is in trouble; she tells Enzo she doesn’t know where she is going but she knows she has to go. Damon is forced to choose between Elena and his brother.

Kai answers Caroline’s phone, Alaric wants to know what he has done; he tells Kai to just leave but Kai says he knows how much he loves Gemini for destroying his life. Kai tells Alaric to come find him before he finds the kids and kill them.

Cade tells Damon this exact choice has been his whole life, and Elena is the cause of so much pain and suffering between him and his brother. Damon chooses himself, to give him his soul for all eternity; saying to let Stefan and Elena go; and this is a one time offer.

Stefan begs him not to do it; Damon apologizes and tells him its been one hell of a ride. Cade puts out the fire on the coffin; Stefan continues to beg him not to but he stabs himself in the heart and dies; giving his soul to Cade.

At the armory, Kai drags his axe calling out the girls’ names. Alaric hides behind a wall playing a recording of the girls’ voices. Alaric begins to beat him, but Kai gets the upper hand, about to kill Alaric and Caroline snaps his neck saying that was for Jo.

Cade comes out on the waterfalls, calling for Damon, saying he is psychic. Damon says hiding isn’t his style but annoying Cade is. Cade tells him his suffering is just beginning. Bonnie arrives and learns Damon sold his soul to him, Bonnie reminds him they share the same gift and she won’t let him take Damon without a fight.

Cade orders her to release Damon or risk losing more people. She refuses even when Damon pleads with her to let go. Damon lets go of the rock just as Stefan stabs Cade with the dagger, causing him to burn from the inside and blow apart; knocking out Damon, Stefan and Bonnie.

Stefan crawls to Bonnie begging her to wake up; she begins to stir and tells Stefan that was a nice save but for the record she doesn’t forgive him. He says consider it a first step because he won’t stop trying until she does. Damon returns and hugs Stefan and tells him to let him do the dirty work next time.

Damon and Stefan sit drinking bourbon to celebrate the end of hell and the devil as they know it. Damon says the bottle was a wedding present and if Stefan thinks leaving Mystic Falls is the answer, he is wrong. Damon says its not the time for them to say goodbye. Damon tells him the brave thing to do is stay even when Stefan says he needs to atone for what he has done.

Damon says he doesn’t need a spirit journey with a bunch of strangers to learn his redemption is in reach; he just needs the people he loves. The list is short but profound and Stefan is at the top along side a great girl he hopes to marry some day. He advises Stefan to not walk away from his list because he doesn’t feel worth it.

Alaric and Caroline talk about the girls and how they both were wrong, Alaric wants to start a school for kids like Lizzie and Josie and he wants Caroline to collaborate with him. Stefan is at the door, he gets on his knees and asks her to marry him; he wants to show it.

When she asks about his need to figure things out, he says he is an idiot and intellectually challenged and even blind because he couldn’t see that everything he was looking for is there, in her. He says he has a lifetime to make things right for what he has done but he can’t do it without her. She struggles that he is human now and she isn’t. He says he loves her and wants to raise her children and their children; and grow old by her side. She says YES!!

Bonnie comes to the bar where Kai is. He is chained to his chair where she reveals his darkest fear is being sent to a prison world. Lizzie and Josie helped Bonnie create one. He is all alone, a song he hates on the jukebox for his forever. Kai tells Bonnie he can’t believe they fell for it.

Cade isn’t running hell anymore, the myth, the legend, the baddest bitch of all KATHERINE! Damon says they are toast!