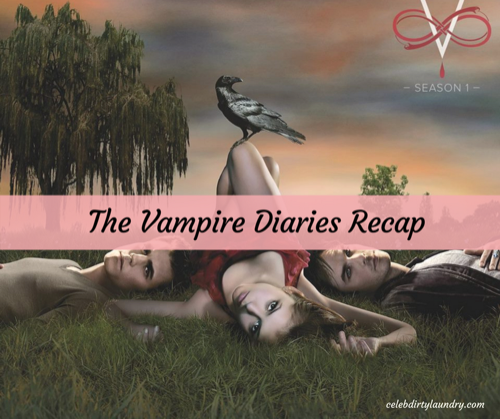 The Vampire Diaries begins with the floats sitting for the Founder’s Day Parade; a woman arrives in town, and when he recognizes her she kills him. Bonnie (Kat Graham) wakes Caroline (Candice King), telling her she is only there to talk about the hell coming their way.

Matt (Zach Roerig) is watching footage of the victim being killed when his dad Peter Maxwell (Joel Gretsch) returns from his trip with his mother, Kelly (Melinda Clarke). Peter says he was hoping they could all have dinner tonight, and since he forgave his father, maybe they could have a family dinner; Matt says he isn’t sure he will be free.

The gang all gathers together to discuss their options. Dorian (Demetrius Bridges) is with Alaric (Matthew Davis) offering to help, but makes it a point to Stefan (Paul Wesley) that he has all the files and fully intends to make him accountable for everything.

They learn Cade (Wole Parks) was killed by a dagger made from his bones, fused into glass by a white hot flame. Damon Ian Somerhalder) informs Dorian they have every last one of Katherine’s (Nina Dobrev) bones in a cave underneath the old church. Matt asks if the bones were fused into metal would work the same. Caroline is shocked that both his parents are back in Mystic Falls.

Stefan and Damon go to get the bones, while Alaric and Dorian do research, because if Katherine is alive, that means hell still exists and they need to break their link. Damon says that Katherine is insanely obsessed with Stefan and if she sees him happy with someone else, she won’t be able to control herself and will come out of hiding. They need to throw one party Katherine would never miss – their wedding!

Bonnie understands why Caroline said yes but she can’t watch her marry him, nor see him happy and its really hard for her to say she will not be there by her side when she does. Caroline understands and apologizes to Bonnie. Stefan overhears how Caroline believes she is part of the reason she lost Enzo (Michael Malarkey).

Damon sees Stefan struggling and tells him Enzo’s death will haunt him for the rest of his life, but he has known his brother for over 200 years, and the real Stefan didn’t kill Enzo; evil, ripper Stefan did it and that is not him any more.

Damon tells Stefan he became an ordained justice of the peace just that morning. Damon states how fitting it is that Katherine is the one who put them through hell, and now they are using her body to destroy it.

At the Grill, Matt and his parents share some memories of his sister. His mother reveals she had a long 4 years to think bout what she missed; he wants to know the real reason she is back but she runs into the bathroom, as she vomits black. A young girl comes in and Kelly says that is what happens when you die, go to hell and come back; but there is a remedy and she kills her. Clearly Katherine is using Kelly’s body!

Caroline returns home and finds a note, that says “To the bride… something old!” She smiles but Damon brings Stefan home drunk; she thanks him for the present. Damon convinces Caroline to leave an overly drunk Stefan on the couch and to come join him for some drinks.

Bonnie sits at home and summons Enzo to spend time with her; he proves to her that she is still a witch who DOES have her magic. Enzo tells her she shouldn’t miss the wedding and she should trust in what Caroline feels.

Enzo reassures her that he is certainly happy, he is imagining them at a chapel in the middle of a lavender field, the perfect place for them to marry; he grabs her and says then they dance and he is the luckiest man on the face of the earth.

Damon cheers with Caroline about her mother, Liz Forbes (Marguerite MacIntyre). Caroline hates that her mom isn’t there, Bonnie isn’t coming, Elena can’t be there. He gives her the necklace that he had given Elena, telling her that Elena will be with her tomorrow. She now has her something borrowed!

As Caroline prepares the morning of her wedding, she sees a gift on her bed. Its a hat box, with a message asking if this is what she imagined and to add some royal bling to her wedding. She opens another box and its a beautiful cameo, but isn’t sure who its from. The twins come rushing in, a great surprise for Caroline, but Alaric doesn’t stay.

The girls help Caroline put the royal headpiece on, and Alaric admits she looks so pretty. He leans in and tells her to be happy, kisses her and leaves. Peter arrives at the wedding and Kelly rushes up to him tricking him into revealing he is making the dagger to kill Katherine.

He finds her acting suspicious and tells her he gave Stefan the dagger already. She turns and vomits more black, when he asks if she is okay she takes out her knife and tells him not really and attacks him.

Stefan puts the dagger into his jacket, as Damon tells him if she puts a hand on him, he will cut her into tiny little pieces and serve her at the wedding buffet. Stefan hopes he will be able to see Damon have this with Elena, the wedding and a human life. Damon says he wants that too because he needs a best man but jokes that he hopes Stefan’s hair hasn’t fallen out by then.

Matt asks where his dad is but his mother says she hasn’t seen him all day. Stefan and Damon make their way to the front of the aisle, and Damon says the music that is playing was the one from a dance Stefan has with Katherine in the 1600s. Caroline is explaining that the girls need to walk in front of her, as she walks alone. Bonnie walks in and says she will walk with her. Caroline is overjoyed as Kelly gets a text saying, “Game on!”

Dorian and Alaric are at the armory, where Dorian feels they could use an immense amount of psychic energy to blow up hell. Alaric tells him the reason he came to Mystic Falls was because he was hunting Damon after his killed his family, but his first wife remained because she wanted to be a Vampire.

The girls and Bonnie walk down the aisle with Caroline right behind them, as Alaric continues to tell Dorian that losing those people is what brought them all together and what made them family. Stefan is teary eyed as he watches Caroline walk down the aisle towards him. She hands her bouquet to Bonnie and the ceremony is about to begin when Stefan realizes the cameo is Katherine’s and tells Caroline to keep it on.

Damon begins the ceremony but no one objects. Kelly runs off and Matt follows her. Damon says since there are no objections, they will continue. They wing their vows, after Damon mistakenly thought they wrote their own. She promises to always remember this moment and Bonnie is having a hard time hearing those words.

Damon calls the munchkins (Lizzie and Josie) to bring up the rings, they exchange the rings and damon announces them husband and wife and tells his little brother to kiss his bride; everyone claps.

At the reception, Bonnie dances with Damon; they are wondering why she would send the necklace but not attend the wedding. For a moment while they dance, Bonnie feels she is dancing with Enzo, but when she opens her eyes, she watches as Enzo walks away and she continues to dance with Damon.

Kelly stabs the gasline at the reception, then throws a propane tank in the fireplace. Matt calls his mom who doesn’t answer; he calls his dad and hears the phone ringing in the bushes; using his light he finds his father who has lost a lot of blood. He tells Matt that Katherine didn’t do this.

Damon begins making the speech, but Kelly cuts him off talking about Caroline’s dead mother and that she doesn’t know what all the fuss is about Stefan. Damon attempts to compel her, but he can’t. She blames him about killing her daughter Vicky. When Matt comes into the room, she tells him she had a bad fall 2 years earlier and he never knew she died.

Kelly says Katherine was the only one who cared; Damon grabs her throat, she vomits and Kelly reveals she caused a gas leak at the house; and they should have never tried to play Katherine Pierce. Caroline runs because Bonnie and her twins are there, but she doesn’t make it inside before it explodes.

Stefan holds Caroline as she screams at the burning house. The girls and Bonnie are standing in the middle of the fire completely untouched. Enzo appears telling her they need to keep moving; revealing she does have magic and the girls are syphoning it straight from her. He tells her to let them syphon it from her and even though she believes it will break their connection he believes the opposite. He believes they will be together again, and it will only be peace with no one to bother them.

He says it is right, use her magic and show them how to do the spell. The girls repeat the chant as Enzo makes Bonnie promise to live all her life. He vanishes as they walk through the burning home; their magic sends their flames through the chimney and all three of them come out unharmed.

Damon and Matt interrogate Kelly who says all she had to do was keep them distracted until the fire. Damon demands to know what Katherine is planning; Kelly says she plans to burn down Mystic Falls with hell fire; tonight!! Matt learns that he isn’t the only Maxwell child around. Vicky came back when he opened the portal to hell.

Bonnie returns to the house and Stefan follows. The Maxwell Bell begins to ring and Bonnie falls into Stefan’s arms, with her nose bleeding. Kelly dies after all the black comes out of her.