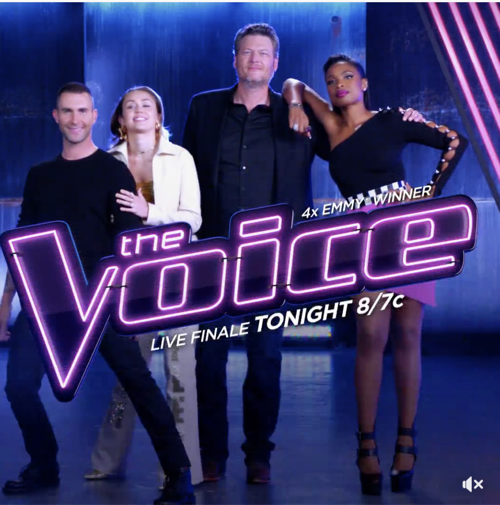 Tonight on NBC’s Emmy Award-winning musical competition The Voice airs with an all-new Wednesday, December 19, 2017, season 13 episode 28 and we have your The Voice recap right below.  On tonight’s The Voice season 13 episode 27, “Live Finale, Part 2” as per the NBC synopsis, “The Season 13 winner is announced.”

The Voice begins tonight at 10:38 am, when Blake Shelton wakes up and his truck missing, he jumps into the Back to the Future DeLorean and ends up 25 years ago when he won the Debo Diamond Award and runs into Billy Ray Cyrus who still had his long mullet, and is walking down the street with Miley in the baby carriage. He races off again, and the finale starts right now as Carson Daly introduces The Voice judges Miley Cyrus, Jennifer Hudson, Blake Shelton, who of course is wearing a jacket that says “Sexiest Man Alive” and Adam Levine.

We kick off the finale tonight with Adam Cunningham, Keisha Renee and Bebe Rexha singing the number one country song in America “Meant to Be.”

Carson comments on how Blake has deeply embraced the uniqueness, power, and love for the 80s that Chloe Kohanski has; making their partnership the recipe for her success. After we see how well they meshed when he stole her; especially her teaching him to use the word “sick” for everything! Charlie Puth takes the stage to perform “How Long”, with Adam Levine playing guitar.

Adam told Addison Agen, she is destined to make an incredible album, just like 9-time Grammy Award winner Norah Jones; so it only seemed natural to get them to sing together. They are singing Norah Jones’ massive hit “Don’t Know Why.”

Carson reveals that the bromance between Blake Shelton and Adam Levine may have changed a little bit in season 13, as Adam goes to see Dr. Drew Pinsky, sharing that he is being bullied by a co-worker. He says the jokes were fun and playful, who now makes fun of his outfits, and his tattoos. He talks about Gwen Stefani dating Blake. Adam begins to cry, then shares that Blake has one tattoo that looks like deer poop. Dr. Drew says it feels like this is a real problem and that he will have to come back every day to get some help. The next day, Blake comes in to see Dr. Drew says he is being bullied.

Three-time Grammy Winner, one of the biggest voices in the world and the brand new coach for next season, Kelly Clarkson is up next to perform her TV debut of her new single “Medicine.” After her performance, we take a look at the past year of Season 12’s winner, Chris Blue’s life. He never imagined he would perform his own song on the finale of The Voice. He talks about working in the studio with Alicia Keys, his mentor and former judge, who says this is just the beginning for Chris.

Alicia Keys joins Carson Daly on stage to welcome Chris Blueback, and announces that Alicia Keys will also be returning to her coach chair on Season 14 of The Voice, along with Kelly Clarkson. She says Chris is the real deal, a true artist and is so proud to introduce Chris Blue and the world premiere of his song “Blue Blood Blues.”

Adam and Addison share how they connected with each other. He feels she is an old soul. She finds he is relaxed but very focused. He feels she is fun and they bond over music. He is so proud of her and pinky swears they are in for a lifetime of friendship. Carson announces that Brooke Simpson from Team Miley teams up with 9-time Grammy nominated singer and songwriter, Sia to perform the massive hit “Titanium.”

Chris Weaver, who was on Team Jhud returns to perform tonight; he is a soul singer who is a worship leader by day but also a drag queen. He brought a group of 3 drag queens with him for tonight’s performance and says this is going to be the first time America is going to see something like this on this type of platform. The Voice presents Chris Weaver as Nedra Belle A House of SAM film; they perform “Bang Bang.”

Chloe Kohanski now takes the stage with an 80s icon, Billy Idol, as they perform “White Wedding.” Carson announces that Billy Idol and his band will be on tour, next year.

The finalists and coaches write on a board all the things that are important to them as Blake hopes Red Marlow will win because he represents a time in country music that we just don’t see any more. Adam feels Addison is an amazing singer and person who is beautiful inside and out, she is a friend of his forever. Miley says Brooke has been amazing to work with and she has watched her grow a lot, she has opened up and shown her honesty and feels a lot of people have gotten to know her more. Blake says Chloe is so unique and feels it would change the music if her voice could get on the radio.

Addison says if she wins it would mean all the work she has put it was worth it. Red feels it would mean everything to his family. Chloe says it would mean she was right to never give up on her dreams and Brooke says it would mean her life has changed. All four finalists are on stage with Carson, holding hands, asking for the coaches to come forward to present them with their special gifts. Thanks to their friends at Toyota, the four remaining finalists all receive keys to their brand new 2018 Toyota Camry.

Red and Blake’s friendship is a “match made in heaven.” They talk about that they are equally dumb; Blake joking that he is pretty country and Red has some one-liners he hasn’t even heard. Red says he will miss working with Blake as he really considers him a friend.

Carson introduces Grammy nominated, multi-Platinum winning superstar, Demi Lovato is on stage to perform “Tell Me You Love Me,” a track off her new album. Shortly after her performance, up next on stage is Davon Fleming with Jessie J and her new single “Not My Ex.”

We return from commercial and Carson introduces Vince Gill who has an impressive 21 Grammy Awards and is a member of the Country Music Hall of Fame. The country music icon sings “When I Call Your Name” with Red Marlow.

We take a look back at when Brooke picked Miley, and they immediately met families. Miley admitted it was hard to be serious with Brooke sometimes and felt like she was like a grandma to her. Miley says they have been working together for like half a year now and have really grown together and feel blessed to bond. Immediately after their performance, 11 times Grammy Award Winner Pharrell Williams takes the stage with N.E.R.D. and perform “Lemon.”

We are about 15 minutes from learning who the winner is of Season 13 of The Voice. Sia returns to sings “Snowman” off her new Christmas album ‘Everyday is Christmas.’ Jennifer Hudson gives us a tour of Jhud Productions, where they make fun of her throwing shoes throughout the season.

Carson Daly calls the four finalists to the stage, they hold hands. Chloe says Blake’s encouragement means everything, and says stay true to who you are, and appreciates that he trusts in her and invested in her. Red feels like hanging out with Blake is like hanging out with his dumb brother. Thanks to him and his family. Brooke thanks, Miley, appreciating her for making her into the artist she has become and for being one heck of a leader. Miley shouts out that she loves her too. Addison thanks Adam for believing in her from the start. She tells him that his trust in her as a person and artist means more than he will ever know. She thanks him as he blows her a kiss.

The artist in fourth place is Red Marlow; Blake hugs him as he leaves. The artist in third place is Brooke Simpson; Miley places a massive crown on Brooke’s head. Blake doesn’t have any final words for Chloe because he feels they are going to be friends for a long time and hopes that she will let him open for her one day. Adam tells Addison she is astonishing and for someone like her, this is just the beginning. He wishes them both luck and says the work starts tomorrow and he wants to be a part of it.

Carson says the winner of The Voice Season 13 is CHLOE KOHANSKI!