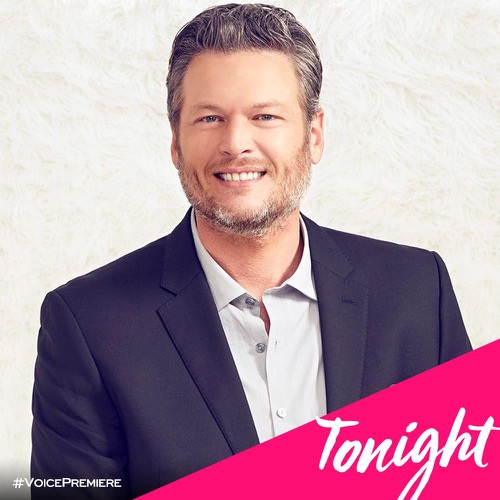 Tonight on NBC’s Emmy Award-winning musical competition The Voice premieres with an all new Monday, February 27, 2016, season 12 premiere and we have your The Voice recap right below.  On tonight’s The Voice season 12 premiere episode as per the NBC synopsis, “Season 12 opens with blind auditions. The coaches are Gwen Stefani, Alicia Keys, Adam Levine and Blake Shelton.”

Season 12 starts with Gwen talking about her tour and her time away from the show. She missed it and is excited to be back and is ready to compete. It is night one of the blind auditions and Blake says he will not go easy against Gwen even if she is his girlfriend.

The first contestant is Josh Hunter from Georgia and he goes by the stage name J. Chosen. He always knew he could sing but because he was so tall he played basketball. It wasn’t until he blew out his knee that he started to take singing seriously. He is a para-professional educator to pay the bills but dreams of singing full time. Josh takes the stage and sings “Sexual Healing” by Marvin Gaye. Josh doesn’t even finish the first two measures of the song and Adam turns his chair, Alicia is close behind him. Blake is next to turn followed by Gwen.

Adam leaves his chair and hugs Josh, he is so impressed. Josh says it is a dream come true. Each of the coaches have nothing but praise for Josh and make their case for why Josh should be on their team but Josh chooses Gwen. Josh said he picked Gwen because he knew she would give him the diversity of tone and melody that he needs. Just like that Gwen has an R & B artist on her team and the competition is on!

The coaches joke about Blake and Gwen’s relationship and how Adam is no longer number one in Blake’s heart. Up next is contestant 25-year old Lauren Duski from Michigan. Her family has zero interest (or talent) in music but she started traveling around at the age of nine singing with a country band. When she graduated from college she had to decide if she wanted to become a dentist or pursue music full time. It was an easy choice and she moved to Nashville to work on her music. Lauren shares she would like to work with Gwen. Lauren sings “You Were Meant for Me” by Jewel. Within 5 seconds Adam turns his chair. Next to turn is Blake followed by Gwen almost immediately.

Adam praises Lauren for her subtly and soulfulness that is needed to win the show. Gwen says she would love to work with Lauren to help her get her story out through her music. Even though Alicia didn’t turn her chair she has positive feedback for Lauren. Blake tells Lauren she is someone who can clearly win the entire thing! Lauren picks Blake and shares she really viewers herself as a country artist. Blake then says he has to go make up with Gwen for steal Lauren.

The third contestant of the night is a familiar face from season 11, Johnny Hayes of Alabama. He says he took the advice he received the last time he was on the show and used it to become a better musician. He sings “Try a Little Tenderness” by Otis Redding. The song has special meaning because it played on he and his wife’s first date. Gwen and Adam turn at the exact same time. Adam can’t stay in his chair and sways to the song as Johnny kills it. Adam can’t believe that the other two judges did not turn around and also can’t believe the energy level in his singing. Gwen and Adam bicker and Alicia comments on his tenacity for returning. Blake makes a pitch for Gwen and Johnny picks Adam.

Twenty-five year old Skyler Harris is the next contestant. She is from Tennessee and a full-time police officer. Music is a huge part of her life but her job takes most of her time. Skyler started to sing in church and was in an abusive relationship that kept her away from music. But she had an epiphany that lead to the end of the relationship and a re-dedication to her music. She is hopeful that Alicia will pick her. None of the coaches turn around. They all praise her voice but say she needs to put more of herself into her art. Blake encourages her to come back.

Anatalia Villarand is a sixteen-year-old from California. She is only 4’9” and her parents describe her as a handful. She starting sing in her school talent show and is now in show choir. She is almost done with her song before all four judges turn simultaneously. All the judges comment on the huge voice coming from such a small girl. They call her family out onto the stage because they can hear their enthusiasm. Alicia comments on Anatalia ability to express herself. Gwen feels passionate about her personality and energy. Adam and Blake chide each other in attempt to win Anatalia. Alicia ultimately wins Anatalia for her team.

Night one continues with 27-year-old artist Stephanie Rice from Texas. He dad was a pastor at a Baptist church where she was around music constantly. Stephanie remembers when she first heard the word Lesbian and knowing that was who she was. Her family did not approve and told her she was sick. They disowned her and they haven’t spoken in 9 years. Stephanie’s biggest fear is that she will be a disappointment to her family. She met her fiancée in 2013 and she was the first person who showed her unconditional love. She sings “Piece by Piece” by Kelly Clarkson.

Blake turns before she even has the first sentence out. Gwen turns next and is almost in tears listening to Stephanie’s beautiful rendition of the song. While Adam didn’t turn he encourages her to pick Gwen. Gwen tells Stephanie that she can feel her pain in her music and wants to help her continue to express that in her music. Alicia also encourages Stephanie to choice Gwen. Blake says it was as if she wrote the song herself and asks what that is about. Stephanie shares the painful story of her father’s rejection and ultimately picks Gwen.

Brandon Martin of Kentucky is 25 years old and talks of his life in a small town of 1700 people. His father bought him his first guitar when he is just 14. He could listen to a song and within a couple hours have the song ready to be played for the family. He works on the family’s farm and has also worked in the local sawmill. When Brandon’s not working he plays in a traditional county and southern rock band. He thinks he and Blake would be the best fit. “Here’s A Quarter (Call Someone Who Cares)” is the song Brandon sings but none of the coaches turn around. They tell him he is country he makes Blake seem like a poser. Blake tells him he is a little sharp at the end of his phrases. Adam tells him to come back again because he is so close.

Mark Isaiah from Pennsylvania is next up. He is 19 years old and brings with him his dad, mom and little brother. He was overweight growing up and struggled with his confidence but entered a Justin Bieber contest singing Baby. He won the contest which helped him get the confidence he needed. Mark sings “Mercy”. Gwen and Adam turn and Carson comments that Mark is a star. Gwen tells Mark that she has had a much longer career than Adam and that Mark will be bored with Adam. All the coaches comment on the strength of Mark’s voice and he pick Adam. Adam says there is no doubt that Mark will have a legion of fans very soon.

One of the youngest in the competition is next and she is 14 year old Brennly Brown from California. Her father introduced her to county music when she was just six years old and she has been singing ever since. When she heard the age for the Voice had been lowered from 15 to 13 she knew she had to try to get on the show. She sings “Stupid Boy” and Alicia and Blake turn their chairs around. Brennly shares that country artists have always been her inspiration and Alicia knows she is in trouble. Alicia shares that she was also 14 when she started her career. Alicia says she shouldn’t put herself in a box but Brennly decides Blake is best for her style and roots.

Pennsylvania is the home state of 31-year-old Shaun ChrisJohn. He talks about what an influence his grandmother was on his choice of music. He had planned to pursue his dreams of music in LA or New York but his grandmother because ill and he is now her caretaker. “You Are The Best Thing” is Shaun’s song choice but unfortunately none of the coaches turn around. Alicia is the first to offer support and encouragement to Shaun telling him he has a strong emotional voice. Blake offers constructive criticism but he just didn’t have the emotional connection with the audience.

Felicia Temple is a 28-year-old register nurse from New Jersey. She grew up always wanting to be a musician but also couldn’t deny her pull to be a nurse. One year ago she was diagnosed with a rare cancer and had to have surgery and chemo. She is now healthy and decided she had to pursue her musical dreams. Alicia, Gwen and Blake turn their chairs and fight it out for Felicia. They can’t believe Adam didn’t fight for Felicia. Adam thinks she sounds very much like Alicia and Alicia joins Felicia on stage to sing a duet. The other coaches don’t even get a chance to make their case. Once they are done singing together Felicia picks Alicia. THE END