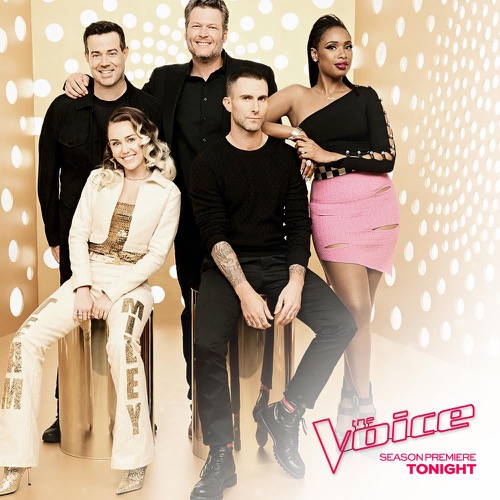 The show opens with an introduction of the current coaches. They are Blake Shelton, Adam Levin, Miley Cyrus and new comer Jennifer Hudson. Miley thinks she has what it takes to win the whole thing and Jennifer is excited to start this journey. Carson welcomes the first contestant. He is a worship leader by day and a drag queen by night. Chris Weaver views his appearance on the Voice as a life changing event. Within his first verse of “Try A Little Tenderness” both Jennifer and Adam turn their chairs. Miley and Blake both turn before Chris finishes the song. His parents are in tears as the judges’ fight for Chris. He decides to be the first member of Jennifer Hudson’s team. Adam is heartbroken.

Mitchell Lee is a 29 year old wood worker from Nashville, TN. His mother died when he was just 22 years old and her death helped prompt him to follow his dream in music. He sings “Hold My Hand”. Adam, Jennifer and Blake turn around almost immediately. Adam pushes hard in hopes that Mitchell joins his team but he picks Blake. Blake really enjoyed Mitchell’s slight southern twang. Adam tries to make nice with Blake but he doesn’t think he will be able to keep it up all season.

Miley and Jennifer take selfies as they wait for the next artist to take the stage. The next contestant is Janice Freeman and she sings “Radioactive”. She has been through a lot of adversity in her life including the death of her daughter’s father and her diagnosis of cervical cancer. Jennifer and Miley both turn their chairs. Adam loved Janice’s rendition of the song and Miley liked her version more than then original. Both Jennifer and Miley make strong cases as to why Janice should join their team and she picks Miley.

Xaris is 17 years old, plays several instruments and loves music. She has over 350 records. She goes to school and works in a yogurt shop. She sings “Don’t Think Twice, It’s All Right”. Unfortunately none of the judges turn around. After the judges turn around they regret not moving to pick her. Adam says not enough was gained by just listening.

The next singer is Shi’ann Jones singing “Drown In My Own Tears”. Jennifer turns around on her first note. Jennifer then threatens the other judges not to turn around. Blake is not afraid and also turns his chair for Shi’ann. Jennifer reminds Shi’ann that she turned around immediately and that is why she should choice her. Jennifer won’t even let Blake say anything to Shi’ann. He finally gets to talk and tells her he has been a coach on the show for 13 seasons and is passionate about being her coach. However, Shi’ann choses Jennifer as her coach.

Dave Crosby and his 4 year old daughter Claire sing on YouTube together. They have a huge following and she is with Dave as he appears on the show. He worried that he would not be able to support his family if he followed his love of music but he couldn’t fight the urge. Adam turns his chair for Dave and it seems he will be the only one but then Blake and Miley also turn. Claire joins Dave on stage and sings “You Got A Friend In Me”. The crowd and judges love it. Dave joins Team Adam.

The next singer has appeared on The Voice before. Odises was on Season 3 when he was just 15 years old and was encouraged to keep trying when none of the judges turned around at that time. He sings “Papa’s Got A Brand New Bag.” Unfortunately, none of the judges turn around for the second time. He is disappointed but the coaches encourage him to keep trying. Adam tells him third time is the charm.

Forty-eight year old Esera Tuaolo is from Minneapolis, MN. He is originally from Hawaii and played professional football for several years. He started singing after he left football. He also came out to his family that he was gay. His singing and honesty has given him a new lease on life. He sings “Rise Up.” Jennifer is the first coach to turn around followed by Blake. Both Jennifer and Blake make a strong case as to why they are the right coach for Esera and he picks Blake.

Our next contestant has made his living inspiring others as a 7th grade English teacher. Brandon Showell is 26 years old and from Virginia Beach, VA. Several of his students say he is the coolest teacher around. He has been singing for years and is engaged to be married right after the blind auditions. He was thrilled when he heard Jennifer Hudson was going to be a coach and he would love to work with her. Brandon sings “There’s Nothing Holding Me Back.” Adam turns his chair followed by both Miley and Jennifer. After much banter, Brandon joins Team Adam.

The next artist to take the stage is 26 year old cashier Lucas Holliday. He is from Lansing, MI and his customers know him as the singing cashier. He sings “This Woman’s Work.” Just as Lucas is about to finish the song Jennifer turns her chair. None of the judges can believe it was him actually singing. He is so excited to get to work with Jennifer and they sing a song together.

The last contestant of the night is Brooke Simpson. She is a Native American who is active in her tribe. And starting sing with her parents as part of their evangelical work. She sings “Stone Cold” and Blake and Miley turn right away. They are followed by Jennifer and Adam. They all fight to get Brooke to join their team and after much thought she picks Miley.