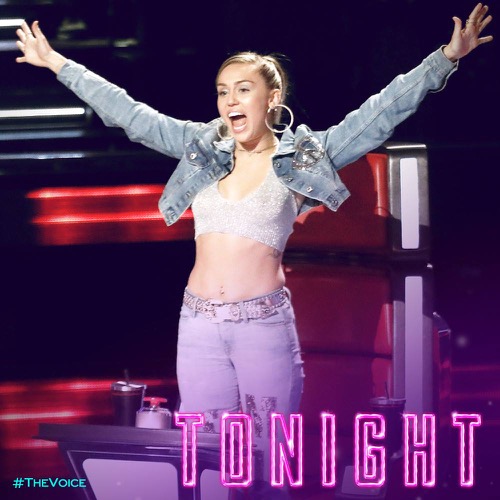 Tonight on NBC’s Emmy Award-winning musical competition The Voice airs with an all new Monday, October 16, 2017, season 13 episode 7 and we have your The Voice recap right below.  On tonight’s The Voice season 13 episode 7,  “The battle rounds begin; and the coaches enlist top recording artists to advise their singers. Blake Shelton teams up with Rascal Flatts, Adam Levine with Joe Jonas, Jennifer Hudson with Kelly Rowland, and Miley Cyrus with her dad, Billy Ray Cyrus.”

Tonight the battle to win The Voice begins. Special guests join Miley Cyrus, Blake Shelton, Adam Levine and Jennifer Hudson. Rascal Flatts will advise Blake and his team. Kelly Rowland joins Jennifer. Joe Jonas and Adam will work together. While the father and daughter team of Miley and Billy Ray Cyrus are together again. The first pairing of the night is from team Jennifer. Twenty-six-year-old Lucas Holliday will go up against thirty-one-year-old Meagan McNeal. Both are thrilled to get the chance to work with Kelly. They will sing “My Prerogative” by Bobby Brown.

Jennifer encourages both to hold back a little and to focus on their own performance, not each other. Miley was so impressed with both performers. Adam thought their happiness was infectious. Jennifer was so enthralled with how they both commanded the room but ultimately picks Lucas to continue on her team. Meagan is sent home. She thanks, Jennifer so much for the time they spent together.

The next pairing up for the first night of the battles is 16-year-old Moriah Formica versus 26-year-old Shilo Gold from team Miley. Neither can believe they have the opportunity to work with Billy Ray. Miley paired them together because she views them as her rock girls. They will sing “American Women” by The Guess Who. Billy Ray was so impressed with the power in Shilo’s voice and the soul that Moriah showed blew him away.

Both women present amazing performances. Adam thinks Moriah is an incredible singer and can’t believe she is only 16. She has his vote for sure. Blake thinks Moriah is an unbelievable rock star. Jennifer was blown away by the notes Moriah hit. Miley calls Moriah a rock goddess and picks her to move forward in the competition. Shilo thanks Miley for her help while the rest of the judges tell Miley they think Moriah could go all the way in this competition.

Blake is so happy to have Rascal Flatts work with his team. They were his mentors when he first started in the music industry and he was their opening act at one point in his career. Blake has paired 30-year-old Keisha Renee versus 17-year-old Noah Mac. They will sing “I’m So Lonesome I Could Cry” by Elvis Presley. Keisha thinks Rascal Flatts are the perfect mentors for her because she strives for their soulful country sound. Noah is encouraged to make the song his own and show his soulful tones. After the performance, Jennifer says she is so glad she doesn’t have to make a decision because she just couldn’t do it. Miley is torn but thinks Keisha has what it takes to win while Adam agrees with Jennifer that he can’t pick between the two. Blake struggles but finally picks Keisha as the winner of the battle. Noah thanks, Blake and Rascal Flatts for their help. As Noah is leaving the stage Jennifer steals him for her team.

Jennifer and Kelly welcome 29-year-old Chris Weaver and 24-year-old Kathrina Feigh as the next battle pair up. Chris is a worship leader by day and a drag queen by night while Kathrina is formally trained in musical theatre. Jennifer is looking for a memorable and powerful performance tonight. Chris has been a fan of Kelly’s for years. They will sing “Dangerous Woman” by Ariana Grande. Jennifer chose this song because it will give them both the chance to really shine. Chris will be able to showcase his deep tones while Kathrina hopes to show Jennifer she can take direction. Miley thought Kathrina was amazing and both she and Chris set the standard so high. Adam thinks Chris is a force of nature that can’t be stopped. Jennifer thinks both came at the song like freight trains but the winner of the battle is Chris. As Kathrina thanks, Jennifer with tears in her eyes, Blake steals her for his team. She is thrilled to join his team and remain on the show.

The next pairing of the night is from team Miley. Both twenty-six-year-old Brooke Simpson versus eighteen-year-old Sophia Bollman feels like superstars getting the opportunity to work with Miley and Billy Ray. They will sing “You’re a Big Girl Now” by Bob Dylan. Miley chooses this song because it is kinda of out of the box and will show her where they both can go with their voices. She is very excited to see where they take it. Billy Ray knows it will be very hard for Miley to pick a winner in this battle.

Adam thinks Sophia is a mini Shakira but Brooke won the battle for him. Jennifer thinks both women really brought it tonight. Blake loved them both but would give the win to Brooke. Miley loved Sophia and it was a great battle. She declares Brooke the winner. Carson reminds the other judges that Sophia is available to steal but none of the other judges make a move. They all just don’t want to miss a chance later on in the show.

Adam and Joe Jonas welcome 31-year-old Adam Pearce and 28-year-old Whitney Fenimore to the next battle. Joe is happy to offer whatever he can to help Adam encourage his team to grow. Whitney grew up with as a Jonas Brother’s fan and is thrilled to see Joe. “Stop Dragging My Heart Around” by Tom Petty will be the song performed during the battle. Adam encourages them to harmonize at the end of the song. Joe was floored by Adam P. and Whitney. He would definitely go to see them on tour. Adam L went into the competition thinks Adam P was the clear winner but after their rehearsals together he has no idea who he will pick to continue on his team.

Blake thinks both did so great in their performances and while he says there is no winner or loser he would go with Whitney while Jennifer would go with Adam. Miley would also pick Adam P. Adam L. decides Adam P. won the battle and will remain on his team. As Whitney thanks Adam for all of his encouragement, both Blake and Miley push their button to steal. Whitney decides to join Team Miley.THE END