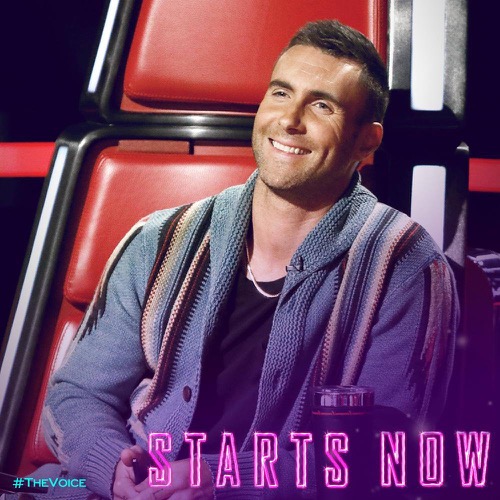 Tonight on NBC’s Emmy Award-winning musical competition The Voice airs with an all-new Tuesday, October 17, 2017, season 13 episode 8 and we have your The Voice recap right below.  On tonight’s The Voice season 13 episode 8, “The battle rounds continue, as the coaches and top recording artists advise the singers. Blake Shelton teams up with Rascal Flatts, Adam Levine with Joe Jonas, Jennifer Hudson with Kelly Rowland, and Miley Cyrus with her dad, Billy Ray Cyrus. Two of Jennifer’s artists are handed the tall order of singing a Whitney Houston song; Blake and Rascal Flatts are impressed by Blake’s left-of-center rock artists; and Adam and Jonas task two vocalists with putting their own spin on a current hit.”

Tonight, the battle to win The Voice continues with the help of 4 of the biggest names in the music industry – Rascal Flatts – Billy Ray Cyrus – Joe Jonas – Kelly Rowland. Tonight is night 2 that the artists need to take it to the next level with the first pairing from Team Jennifer with the pairing of Davon Fleming, 25 from Baltimore and Maharasyi, 27 from Los Angeles.

Davon jokes that they both fell on the floor when they saw Kelly Rowland, saying it was greatness before their eyes with both Kelly and Jennifer in front of them; both acknowledging this is their biggest opportunity. They sing “I’m Your Baby Tonight” by Whitney Houston. Jennifer wants them to shine and reminds them to keep up with the authenticity and not be caught up with others.

Miley loved most the entertainment factor and how much they used the stage seemingly comfortable with such a big song. She is an equal fan of theirs saying its ultimately lands on Jennifer and how she can work with them and who fits in the “pocket” best. Adam sighs, saying he can’t even look at Davon because he wanted him on his team. He feels they are both fantastic and that is quite a dress! He sides with Davon because he is a force of nature but tells Maharasyi she has an incredible voice. Blake feels they are both “4-chair” turns and gives them and Jennifer credit for what they just did on stage.

Jennifer tells Maharasyi she looks like a star, sounded amazing and her whole growth made her extremely proud. Davon exuded his love for singing and Whitney shone through, which made her decision hard but she chooses – Davon Fleming!

The second pairing of the night is from Team Adam with Brandon Showell, 26 from Virginia Beach, Virginia against Hannah Mrozak, 18 from Richfield, Wisconsin. Both were very excited to have Adam turn for them; Adam thinks they both can do it all and is excited to be working with Joe Jonas who is young but has also been in the music industry for a long time. Joe thinks it’s an honor to give insight and knowledge to hopeful singers.

They will be singing “Cold Water” by Major Lazer featuring Justin Bieber and M0. Adam likes twisting this pop song is offering a different version to enjoy. He feels both Hannah and Brandon have beautiful voices and the song shows both their voices off but Joe feels Hannah tends to get lost in the moment. He reminds Brandon to remember to catch his breath. Adam wants to add some ad-libs, he says they connect in a great way, so sing it to each other! He feels it’s going to come down to who he cannot look away from.

Blake congratulates them, saying Brandon had a few tricks and handled them in a unique way. He loved how Hannah went for a note and soared up there. He would go with Hannah in the performance. Jennifer loved the pairing a perfect duet, sounding truly seasoned. She said if she had to choose she would go with Brandon. Miley admits she pushed from Brandon and not Hannah but now sees her fullest potential through her awesome coach in Adam. She congratulates them both on an amazing performance.

Adam reminds Hannah that he found something special in her from the beginning and that hasn’t changed and Brandon was different because she liked him at the beginning but has grown to love him as a person and in his talent. The decision is difficult because they both did what they were supposed to do and a dead even match. Adam chooses Hannah Mrozak!

Team Blake had Esera Tuaolo versus Rebecca Brunner singing “This I Promise You” by NSync. Blake chose Esera Tuaolo!

Team Miley had Chloe Kohanski battle against Ilianna Viramontes, they sang “I Am Woman”. Miley felt vocally they were both equal but she can only work with one of them and chose Chloe Kohanski!

The next battle is among Team Blake – Dennis Drummond and Mitchell Lee, both from Nashville. They are thrilled to see Rascal Flatts mentoring with Blake. Blake paired both Dennis and Mitchell because they are both Nashville guys but they aren’t necessarily country and more rock; he feels this will be one of the best battles of Season 13. They are singing “Mr. Jones” from Counting Crows. Blake says what Dennis has on Mitchell is his clarity, were Mitchell looks like the lead singer. The only thing that might work against Mitchell is he is too confident and underestimating Dennis.

Jennifer says they are captivating and amazing to watch. She talks about how cute Mitchell is and how she loved Dennis bustin’ a move. She says she wants to come to their concert, together or apart and feels they both are stars but says she would have to go with Mitchell. Miley says Mitchell’s voice is pitch perfect and Dennis is so much fun to watch, she loved Dennis’ vibe and stage presence. She loved his guitar but picks Mitchell because of his voice. Adam says they are both awesome; Mitchell sounded more like the original and Dennis did his own version. Mitchell is more in Blake’s wheelhouse but Dennis is a totally different kind of artist and a definite wild card.

Blake jokes how no one commented on how tall Dennis is; they liked his entertainment and everyone had said Mitchell is pitch perfect. Blake says this is heartbreaking as he has to let someone go and is the closest battle he had all season. Blake chooses Mitchell Lee!

As Dennis stands on stage and is eligible to steal and before host Carson Daly can finish the sentence, Adam Levine hits the button and steals Dennis for his team. Adam says he is super talented and Carson welcomes Dennis back to the show.