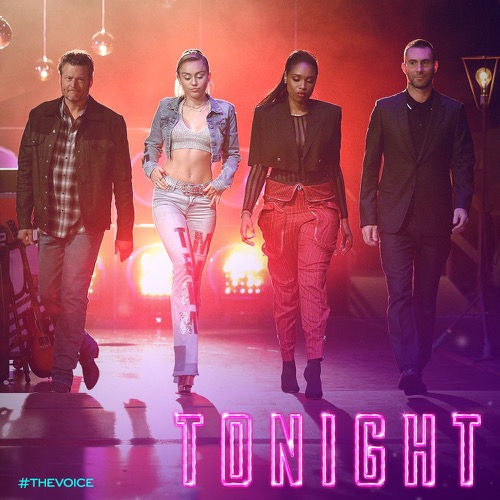 Tonight on NBC’s Emmy Award-winning musical competition The Voice airs with an all new Monday, October 2, 2017, season 13 episode 3 and we have your The Voice recap right below.  On tonight’s The Voice season 13 episode 3,  “The “blind auditions” continue as superstar coaches Miley Cyrus, Jennifer Hudson, Adam Levine and Blake Shelton all vie to discover and coach the next singing phenomenon from the country’s best vocalists.”

The show opened with a written statement on the screen offering support due to the horrible shooting in Las Vegas. Then Adam is shown driving a golf cart picking up the other judges on the way to the studio. They joke, sing and tease each other. Carson asks Jennifer how she feels about night two of the blind auditions. She says she is learning fast.

The first artist of the night is 38 year old Iowa native Adam Cunningham. He came to Nashville to become a famous singer but to pay the bills became a full-time session singer. Adam is also a hands-on dad to his young daughter Poppy. He is so happy he can make a living as a singer but wants to take it to the next level. Tonight he performs “Midnight Rider.” Immediately the crowd loves his performance as does Blake who turns around. Jennifer also turns around. Miley makes the argument that Jennifer is the one for Adam. Jennifer then makes the case that she can help Adam develop the soul piece of his act. Blake doesn’t have to make a very hard sell before Adam decided to join Team Blake.

Hannah Mrozak is an 18 year old aesthetician from Richfield, WI. She spends most of her days providing facials and relaxation treatments. Singing is her passion and her brother was the one who encouraged her to try out for the Voice. He committed suicide last year and she performs for him tonight. She sings “Starving” and both Blake and Adam turn right away following by Jennifer. Adam makes his case first and tells her to make a smart choice and pick him. Jennifer sells her production company while Blake showers her with compliments. Hannah thanks everyone for turning around for her and she then picks Adam.

Miley fills Jennifer in on how to handle both Blake and Adam. Shilo Gold is 26 years old and went to Berkley College of Music in Boston. Her father is a 7th generation cantor. She has performed in 7 countries trying to connect with as many people as possible. She hopes to be herself on the show tonight and would love to work Jennifer. She sings “Stay With Me Baby”. At the very last minute both Miley and Jennifer turn their chairs. Miley thinks she really understands the rasp of Shilo’s voice and Shilo joins Team Miley.

Samantha Rios is 16 years old and is from Arlington, VA. Her mother is from Ecuador and her father is Honduran. She was born in the US and likes to sing in both English and Spanish. She will sing “Somethings Got A Hold On Me” by Etta James. She loves the enthusiasm and soul of the song. She does a great job but none of the judges turn their chairs. All of judges offer her support and encouragement. Jennifer gives her a couple of tips and hopes she comes back.

Adam and Blake hug and share some love. Miley and Jennifer try to figure what is going on with them. Noah Mac is the next to perform and his mom isn’t sure if she is ready for him to perform on the show. He is 17 years old and is completely consumed by music. He turned their backyard shed into a music studio. He first performed publicly at his 19 year old sister’s funeral when he was only 8 years old. She died of brain cancer and his song provided comfort to the whole family. Noah will sing “Way Down There” on the Voice tonight. Jennifer turns her chair followed by Blake. They both provide strong arguments as to why Noah should join their team. Jennifer felt like he took her on a journey while Blake thinks he will bring something to his team that he doesn’t have yet. Noah picks Blake. It is becoming obvious that Blake and Jennifer are the new rivals for this season.

Twenty-five year old Davon Fleming is from Baltimore, MD. He grew up in a rough part of Baltimore and it has made him a fighter. He is a singer and vocal leader in his church. His mom dreamt of being a famous singer but once she had children she had to put her dreams on hold. Davon would love to make sure the coaches hear his heart. He performs “Me & Mr Jones.” Adam, Miley and Jennifer turn immediately followed closely by Blake. Adam tells Davon if he doesn’t pick him he will snap. Blake tells him he will be in the finale. Miley tells Davon his style inspires her. Jennifer sings “I Will Always Love You” with Davon. Blake says the he specializing in winning this show and if Davon picks Blake he will win this show. Davon decides to join Team Jennifer.

The coaches talk about how similar Blake and Jennifer’s taste in music. Kathrina Feigh is from the Philippines and she is 24 years old. She comes from a very big family and she can’t remember a time she hasn’t been singing. She has been studying musically theater but realizes several months ago she wants to pursue a solo singing career. She performs “Big White Room.” Jennifer and Blake turn on the last note of the song. Adam tells Kathrina that Jennifer and Blake love to fight over performers but Miley encourages her to pick Jennifer. She joins Team Jennifer.

Clips of scenes that happened earlier in the night are shown. Alexandra Joyce and Eric Lyn join Team Jennifer while Anna Catherine DeHart picked Blake. Ft. Wayne, IN native Addison Agen is 16 years old and flying to be on the Voice was the first time she had ever been on a plane. She classifies herself as an alternative folk singer. She performs “Jolene.” Adam turns first followed by Miley. Blake says he didn’t turn around because he thought she was a better fit for Miley. Adam piles on the compliments and tells Addison he is her biggest fan. She decides to join Team Miley but apologizes to Adam.

Adam threatens Blake for encouraging Addison to join Miley’s team. He tried to play nice but no more. Carson welcomes Adam Pierce back to the show from season 12. He worked with two different vocal coaches to help him work on the issues that where pointed out to him during his first time on the show. He hopes this time he will get the opportunity to join a team. Adam and Miley turn their chairs and Adam’s family goes nuts. After much banter Adam P joins Adam’s team.

Myles Frost is 17 years old and from Washington, DC. His mom says he has always been rambunctious and full of energy. He plays five instruments and at a very early age was able to play music after just hearing a song one time. He views his opportunity on the show to learn many things that he can use in his future. He sings “My Cherie Amour.” Unfortunately, no one turns around. Adam and Jennifer both think his nerves got the best of him and encourage him to come back again.

The final act of the night is 16 year old Moriah Formica from Latham, NY. Her dad was her biggest influence and she started taking voice lesson at the age of 11. She sang a song on singer Michael Sweet’s solo album and she loved that experience. Moriah sings “Crazy For You.” Miley, Blake, Adam and then Jennifer all turn. All four judges give her a standing ovation. They all really try to sell what they have to offer Moriah and all would love to be her coach. She decides to join Team Miley.