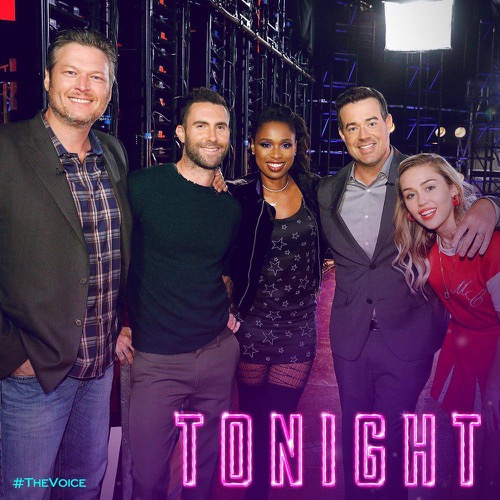 Tonight on NBC’s Emmy Award-winning musical competition The Voice airs with an all-new Tuesday, October 30, 2017, season 13 episode 11 and we have your The Voice recap right below.  On tonight’s The Voice season 13 episode 11, “The Knockouts Premiere,” as per the NBC synopsis, “The “knockout rounds” begin. Kelly Clarkson serves as a key adviser and is on hand to work with all of the coaches and their teams as they prepare the artists for this challenge.”

Kelly Clarkson joins the coaches for the beginning of the knock out rounds. Blake calls her the mega advisor and he is thrilled to have her on the show. The first pairing of the night is from Team Blake. He has put Adam Cunningham and Esera Tuaolo together because he thinks they have very similar voices. Adam will sing “Either Way” by Sean Steepleton. Blake loves this song choice because he thinks it really showcases Adam’s voices. Esera will sing “Superstar” by the Carpenters but he is doing the Luther Vandross version. He was emotional as his mother is very ill right now. Kelly was blown away by both men’s practice rounds. She doesn’t envy Blake having to make this difficult choice. Adam sings first and Blake is very impressed by his performance. Esera also has an outstanding performance. Jennifer loved Esera’s song. His notes were just perfect. Jennifer thinks it was a tie; both Adam and Esera were wonderful. Adam feels like he would have to vote for Esera. Blake decides that Esera is the winner of the knockout. Before Carson can remind the judges that Adam is available to steal Adam L. hits his buzzer and steals Adam C for his team.

Jennifer has paired Lucas Holliday and Shi’Ann Jones because she thinks they are both powerhouses and she needs to see which one of them is ready for the next step. Lucas is so excited to see Kelly. He has been a fan of Kelly’s for years. Lucas will sing “Tell It Like It Is” by Aaron Neville for his knockout song. Shi’ann will perform “Whose Lovin’ You” by the Jackson 5. Jennifer and Kelly can’t believe she knows the song because she is so young but her father has been introducing her to music since she was very young. After watching both artists perform Kelly tells Jennifer she doesn’t know how she is going to be able to choose since both singers as so strong.

Miley thinks Lucas did an incredible job and was blown away by Shi’Ann. Miley can’t believe she is only 15 years old. Jennifer thinks both Lucas and Shi’Ann picked the perfect song for their voice. She struggles with her choice but finally decides Shi’Ann wins this knockout challenge. Lucas thanks Jennifer for her help and Blake comments that Shi’Ann could really be a star.

Adam is up next and has paired Addison Agen against Dennis Drummond. He stole both of these performers from other coaches. Dennis will sing “All Along the Watchtower” by Jimi Hendrix. Dennis wanted a guitar-heavy song to showcase his playing as well as his singing. Addison will sing “Beneath Your Beautiful” by Labrinth. She views herself as an indie folk artists and at 16 years old hopes to make it big. Both Dennis and Addison hit it out of the park. Blake loved both performances but thinks Addison won it for him. Miley is so happy that Addison is still in the game. Jennifer was moved by both singers but Adam ultimately picks Addison to move on with his team.

Miley has paired Janice Freeman and Karli Webster together because of their unique voices. She thinks they will push each other. Janice will sing “I’m Going Down” by Mary Blige. She relates to this song on so many levels and thinks it will showcase her soulfulness. Karli decided to perform “Blue Bayou” by Linda Ronstadt. She is inspired by Linda’s style and the combination of different genres. All three judges agree that Janice knocked it out of the park. Miley was blown away by the level of talent shown by both performers and decides to take Janice on to the next round of the competition.

Jennifer has paired her two soul singers, Davon Fleming and Eric Lyn. Eric will sing “What’s Going On” by Marvin Gaye. Jennifer hopes Eric will use this song to connect with the audience. Kelly loves Eric’s range. Davon will sing “I Can Only Imagine” by Mercy Me. He picked this song because he connects to it spiritually. Kelly thinks this song is Davon’s testimony and Jennifer is almost in tears with the thought of having to pick between these two artists. Eric takes the stage first and has all of the judges moving to his beat.

Davon takes the stage and Jennifer is on her feet before he finishes the song. Miley thinks both performances were wonderful. Blake loved Eric’s style but felt Davon transformed the room. Jennifer declares Davon as the winner of the knockout battle. Jennifer felt it was a gutting wrenching decision but it had to be made.

The show returns with Miley showcasing her pairing of Ashland Craft and Chloe Kohanski. Both have such big voices and are thrilled to work with Kelly Clarkson. Kelly loves the rasp in Ashland’s voice. Ashland will sing “Wanted Dead or Alive” by Bon Jovi for her knockout song. Kelly wants Ashland to lock eyes with the audience as she sings. Miley thinks Chloe’s chose of “Landslide” by Fleetwood Mac is the perfect song for her. She displays so much emotion as she sings.

Ashland takes the stage first and Miley is on her feet before the performance is finished. She loved it. Chloe than offers a magical performance and all of the judges are moved. Jennifer thinks Ashland is a star but Chloe’s vocals were so powerful she won this challenge. Blake agrees, he would vote for Chloe. Miley says she has to go with her gut and picks Ashland. Both Blake and Jennifer hit their buzzer to steal Chloe. Blake wants Chloe on his team so badly and even Adam puts in a good word for Blake. After some debate, Chloe says she has to go with her heart and joins Team Blake.