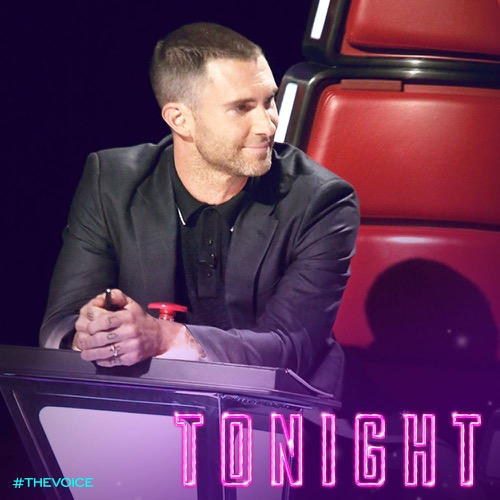 The blind auditions continue with Blake encouraging Jennifer to get her claws out. He then insults Adam. The first performer of the night is 17 year old Anthony Alexander of Fontana, CA. He has been singing in Whiskey-A-Go-Go. His dad has been a camera man on my different television shows including the Voice. Anthony views himself as a Pop Rock Soul singer. He would love to work with Adam.

Anthony sings “Redbone”. Adam turns first followed by Jennifer and then Miley. Blake is the only coach that did not turn his chair and Adam immediately calls him an idiot for not turning. Blake encourages him to do with one of the female judges. Jennifer thinks he is so cute and she is passionate about helping him reach his goals. Miley tells Anthony she is going to win this season and he will be the one on her team to make it happen. He struggles trying to decide who he wants to work with but finally picks Adam as his coach.

Returning from the commercial we see Adam and Blake whistling the Mayberry theme as they wait for Sophia Bollman to take the stage. She is 18 years old and from Norco, CA. She will sing “Invincible” by Kelly Clarkson. She was always told that she had to work hard to achieve her goals. Both Blake and Miley turn their chairs for Sophia. Blake tells Sophia that he knows that he isn’t a typical Pop coach but he thinks could help her go far. She tells him he would be a cool dad. Adam goes crazy that she views Adam as a dad. Sophia decides to join Team Miley.

“Imagine” by John Lennon is the next song to be performed. The singer is 28 year old Jessica Rowboat of Queens, NY. She grew up in India and has lived in the US since she was 8 years old. She didn’t realize until she was 16 that she and her entire family were undocumented immigrants in the US. She and her husband (who is a US citizen) have been able to sponsor her parents and they now have legal status in the US. None of the judges turn for Jessica but all tell her they would love to see her again with a more dynamic song. They just couldn’t get a feel for her voice with that song.

The next artist is 20 year old Carli Webster. She is music major at USC in Southern California. She is a classical piano player and will sing “You’re So Vain” by Carly Simon. She would be honored to be on any one of the coaches’ teams. Adam and Miley turn their chairs right away. Both want Carli on their team badly. Adam could feel Carly Simon’s spirit in Carli’s performance. Miley wants to add Carli to her team of females. Carli decides to work with Miley.

The next artist thinks of himself as an alternative soul singer and has struggled to make a living as a singer. Stephan Marcellus is 26 years old and lives in Englewood, NJ. His parents are from Ghana and always stressed the importance of education to Stephan. While they have always supported his dream he would love to be asked to join one of the teams to show his parents he has made the right choices in his life. He sings “Take Me To Church.” Stephan struggles at the start of his song but gains confidence and Jennifer turns her chair for him. Jennifer writes notes as he sings and tells him that she has stumbled before but she could hear that he has the voice and she will help him. He is so happy to be on Team Jennifer.

The last performer of the night is 24 year old Emily Luther from Woonsocket, RI. She fell in love with musical theater at the age of 8. She went to Berklee College of Music and has sung back up for Dionne Warwick and Yolanda Adams. She moved back to Rhode Island and has been singing at weddings and corporate events. She sings “Summertime” for the coaches and hopes to join a team as her turn self. Blake turns followed by Adam and then Jennifer. Adam was mesmerized by her voice. He almost forgot to push his button. Blake has no one on his team like her because there is no one like her on the show. All three coaches want her on their team and she decides to join Team Adam.