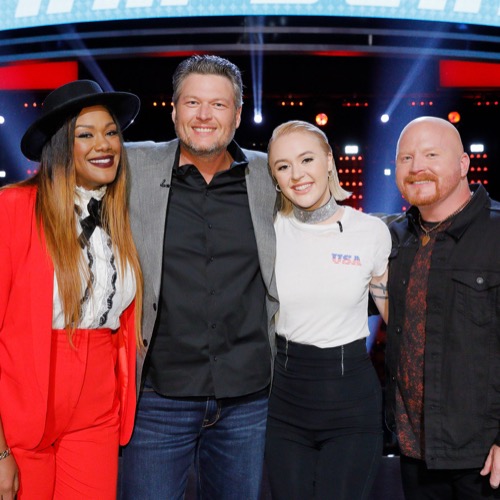 Tonight on NBC’s Emmy Award-winning musical competition The Voice airs with an all-new Tuesday, November 14, 2017, season 13 episode 16 and we have your The Voice recap right below.  On tonight’s The Voice season 13 episode 16, “The Playoffs, Night 2” as per the NBC synopsis, “The remaining artists perform in front of coaches Miley Cyrus, Jennifer Hudson, Adam Levine and Blake Shelton for their chance at a spot in the live shows. Miley also reveals her Comeback Artist, and selects three of her six remaining artists to complete her roster and move on to the final phase of the competition”

Tonight, we are introduced to the Coaches, Miley Cyrus, Adam Levine, Jennifer Hudson and People Magazine’s Sexiest Man Alive Blake Shelton. Tonight, all 6 will be performing from Team Adam, and Adam will have the task of picking 3 to advance to the Live Top 12 Shows beginning next week.

We begin with Adam Cunningham who will be singing, “Have a Little Faith in Me” by Joe Cocker. They talk about how similar their situations are as their daughters are born within a week of each other. He is very grateful Adam stole him from Blake. They agree to do this for their families and for Joe Cocker; Cunningham loves the message in the song because he was pretty low and when he met Courtney, who is now his wife, life turned around for him and inspired him to sing them and to sing tonight. Adam says he kills it because he builds it the right way, the tone is beautiful and the range is crazy. He just reminds him that the big ones he goes for the need to be smooth as silk and to make sure he feels it all.

Adam Cunningham takes the stage and instantly, Blake says “yes.” Jhud is right into the music, especially when he gets to the higher notes; Miley leans into Adam and says her mom is going to love him. He gets a standing ovation from the coaches and audience. Blake says forget about faith, you had the Holy Ghost up there! It makes Blake feel really stupid (Adam jokes that Blake can talk more about that if he’d like). Blake says he hates Adam but loves Cunningham, saying he did a beautiful job. Jhud said he blessed her spirit with that, she felt his energy and all she can do is shake her head and that is a compliment to him. Miley says at the end of the day, this is the last time it is up to us and I think from the reaction from the coaches and audience, you are becoming a fan favorite quickly.

Adam Levine tells him there is no quicker way to his heart than someone who makes Blake Shelton feel stupid. You are just starting to emerge and an amazing singer coming out at a crucial time in the competition. You’re an amazing guy and I thank you for lighting this up.

Whitney Fenimore was Adam’s comeback choice. She loves his song choice of “If It Makes You Happy” by Sheryl Crow. She likes that it was originally written to be country but she made it rock; which is exactly how Whitney is. They both feel the song is perfect for her because she has this effortless cool like Sheryl Crow does. Adam jams with her, hopping on the drums, while she rehearses. He loves that she is a no BS singer.

Blake thinks it would be awesome to have a rocker guitar chick on the show but he feels the first half of the song was a struggle but hopes she moves forward because she is awesome. Miley sang the song with Sheryl before and the song was good for her voice, the detailed lyrics get a little lost if not over pronounced and I am interested in what Adam has to say because of only his opinion matters. Adam says she showed him a lot of strength and a lot of things he didn’t know about her vocally. He is really happy and thought she did a great job and adores her as a human being.

Next up is Emily Luther, who Adam feels can handle a big song like “Lovesong” by The Cure, as it gives her a chance to step out of the safe zone she has been in. She has attitude and needs to show people that side of her. He tells her to sing more with an attitude. He reminds her, the key to succeeding with this one is taking her time with the delivery. Adam feels the sky is the limit for Emily and the other coaches are going to be so pissed because they will know in that one moment, that they are better than them.

Carson Daly says her performance was like The Cure at the opening of a James Bond movie and Adam says he got it! Blake says every time she comes out she is professional, ready and poised and if she wants to stay in the smokey, jazzy lane she is in; that is cool because there is literally no one else doing anything like that. Good job! Jennifer says that was a fabulous performance. I liked that you came out and felt the connection, so with that, job well done! Adam congratulates her on an amazing job, a huge step in the right direction as people are able to see the human and soulful side of her even more and this was a great progression for her and she is an amazing talent!

Anthony Alexander is Adam Levine’s next artist to step up for Night 2 of The Playoffs. He will be singing “Perfect” by Ed Sheeran. Adam reminds him to be more confident as he is very talented in what he is doing. Its a beautiful, romantic and realistic song, so when he admits he has never been in a relationship before; Adam informs the ladies he is single and on Instagram and to check him out. They talk about stripping down the song, as it loses intimacy with all the instruments. Anthony knows when he goes home he will be performing gigs in restaurants and various places, so he wants to stay on The Voice for as long as he can. Adam says Anthony could be a really good pop singer, as he has something really good going and is truly unique; a special tone to his voice.

Blake says he still detects a lot of nerves, but knows he is only 18 and that is probably a huge part of it. He hopes Anthony knows he is super talented and pretty sure the girls really like him. Jennifer tells him his voice is beautiful, she is a big fan and at one point she swears he was really singing to her. (Blake tells her, she wishes). Miley talks about the victory dance he did at the end, and he should have done that because he did a great job and nailed it. Adam says its not a matter of “if” but a matter of “when” you will be ready. You have a tremendous voice with tremendous potential and 100% proud of you.

Jon Mero is up next; he chose “When We Were young” by Adele because the song is about really living in the moment. Right now, being on The Voice is the best time of his life and he wants people to feel that too. Adam says Jon’s attitude has been consistent and his singing is fantastic, he is entertaining but it’s time to show his delicate side. Adam reminds him to open up, so his words don’t go too much into his nose.

As he sings, Miley leans to Jennifer and says he is really good. Coaches are on their feet after that performance. Blake says his voice is like a laser that cuts through everything and you hear and feel every word clearly. You are more than ready for this as that was incredible. Jennifer tells him the moment he just had is the moment everyone should try to have on that stage. You truly lived in that moment and I hope to see you go on. Adam tells him he was excellent; so excellent! So multi-talented. You didn’t dance today and sang only from your heart. I’ve grown fond of you from the time we have spent together and I have a tough decision that is going to suck but you did an incredible job.

Addison Agen is the final artist to perform tonight. She is only 16 years old and singing a country classic “Angel From Montgomery” by Bonnie Raitt. Miley said it really hurt her heart when Adam stole Addison from her during the blinds but Miley is definitely on her team now. Adam says its pretty heart to listen to this song and not melt your heart. Addison reveals her dad owns a record store and the first line in this song talks about an “old woman” which totally represent her, even though she is only 16. Adam reminds her to not float off too much and stay a bit more grounded. People compare her to Adele, because they both make people feel when they sing. Adam reminds her to also not be too much like Bonnie Raitt, in the sense that she sings like molasses, there needs to be something towards the end.

All the coaches are up on their feet. Blake says he loves Addison, Adam cuts him off saying too bad, she is mine! Blake tells her she has so much character in her voice that normally comes from someone who has been doing this for 20+ years, smoking and drinking every day. He says if she doesn’t move forward to the lives, he is going to have someone cut Adam’s brakes. Adam calls him an idiot!! Jennifer only wants to know what her IG, youtube, Twitter and everything is. Adam cuts her off, saying go to thevoice.com a website that will tell me who she is. Miley feels Addison is really going to win this and Adam is going to shove it in her face but she will be happy if she wins because she is on Addison’s team.

Adam says we feel good when you sing, comforted and soulful somehow. There are so many things about what you do that are subtle that cannot be understood in a vocal camp. I think this girl is so special in such a profound way and I just want to see you succeed. You are truly a freaking unicorn and I adore you!!

The artists from Team Adam are brought back to the stage for us to find out who will move onto the live shows. Adam tells them they are tremendous, all 6 of them make him very proud and have all fulfilled their obligations and impressed him. He is big fans of them all.

The first artist moving on is Addison Agen. The second person moving to the live shows is Jon Mero. The last four remaining artists take the opportunity to thank Adam for being their coach and the opportunity he has given them. Adam is now tasked with announcing who the last person is advancing to the Top 12 Live Show. He says he doesn’t know what to do, there were a lot of curve balls today and no correct way to do this. He takes a deep breath and picks Adam Cunningham to join the Live Shows.