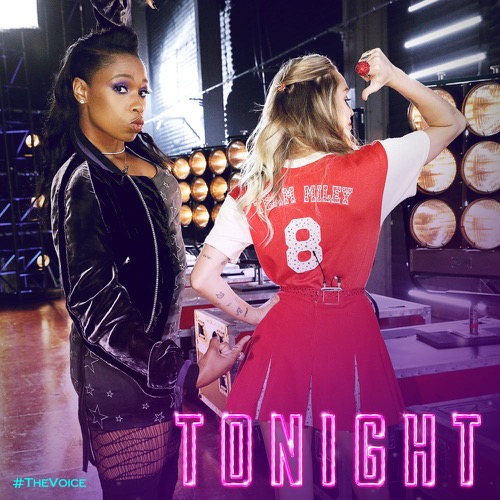 Tonight on NBC’s Emmy Award-winning musical competition The Voice airs with an all-new Tuesday, November 6, 2017, season 13 episode 13 and we have your The Voice recap right below.  On tonight’s The Voice season 13 episode 13, “The Knockouts, Part 2” as per the NBC synopsis, “The “knockout rounds” continue with coaches Miley Cyrus, Jennifer Hudson, Adam Levine and Blake Shelton’s strongest team members remaining from the battle rounds. The artists will be paired against a teammate once more, but this time they will each select their own song to perform individually, while their direct competitor watches and waits.”

The show opens with night two of the knockouts. Miley and Kelly Clarkson joke around. Miley is excited to see Kelly as a permanent judge next season. She is hoping that Kelly will take the title of most talkative away from her. The first pairing of the night is from Team Miley. Brooke Simpson and Stephan Marcellus were paired together by Miley because she thinks they both are similar in talent and style. Brooke will sing “Natural Woman” by Aretha Franklin. She is nervous because she recently heard Kelly sing it and doesn’t think she can compare. Kelly encourages her to make the song her own. She doesn’t need to compare herself to anyone. During rehearsal, Miley and Kelly encourage her to hold back a little in the beginning of the song and let it build as the song progresses. Brooke still can’t believe that she is working with Kelly Clarkson and Miley Cyrus.

Stephan takes the stage to begin his rehearsal. He will be performing “Impossible” by Shontelle. Stephan struggled in the blind audition and actually forgot the words to his song. He was so grateful that Jennifer still was able to see his talent. Miley stole him away when Jennifer did pick him to continue with her team. Miley and Kelly encourage Stephan to sing his song in one octave lower and both coaches love the change.

Brooke takes the stage and hits it out of the park. Her performance is very dramatic. Stephan presents a much more controlled performance but it is equally powerful. Adam has positive words for both performers as does Blake. He doesn’t envy Miley having to make a choice between both Brooke and Stephan. Jennifer loved Stephan but can’t deny that Brooke has a voice! Miley decides to keep Brooke in the competition representing Team Miley. Brooke is thrilled to move on to the playoffs. Stephan has learned so much that he will keep with him forever.

Blake Shelton’s first pairing of the night is Anna Catherine DeHart against Mitchell Lee. Blake put the two together because he believes they both have unique tones and own the stage when they perform. Anna begins rehearsal first and will sing “Breathe” by Faith Hill. She wants to become a country singer and hopes this song will showcase her ability to hit the high notes. Both Blake and Kelly offer her support and tips to improve her performance.

Mitchell is next to take the rehearsal stage and will perform “I’ll Be” by Edwin McCain. He feels like the last two songs he has sung we up-tempo and he wants to use this opportunity to display his softer side. Mitchell’s practice session intimated Anna. She was blown away by his ability to hit the high notes. Mitchell presents his song and the judges are on their feet by the end. Anna will sing “Breathe” after the commercial break.

Jennifer loved Anna’s performance but if she had to choose she would pick Mitchell. Miley would go with Anna. Both Blake and Adam loved the way Mitchell worked the crowd. Blake decides Mitchell will continue in the competition. Mitchell is shocked and Anna thanks Blake for his support in this next step of her journey.

The next pair of the night comes from Team Jennifer, Jeremiah Miller versus Noah Mac. Jennifer put the two performers together because she feels they are both great artists and she wants to see who is ready for the next step in their career. Jeremiah tells Kelly he thinks he is more popish while Noah is more of a soul artist. Noah has always found Jennifer to be an inspiration during his career. He will sing “Hold Back the River” by James Bay. He loves the depth of the song and Kelly was moved to tears by Noah’s performance during his rehearsal.

Jeremiah has decided to sing “Sorry” by Justin Bieber. He hopes the song will hope to show his range and tone. He is only 18 and Kelly comments that he is obviously a ladies man. He performs first and does a fine job. Noah takes the stage next and all four judges are blown away. He is something special and not something they have seen before. Jennifer thinks both have the potential to be stars but decides that Noah will move on in the competition to represent her in the playoffs.

The next matchup of the night is Kathrina Feigh versus Keisha Renee from Team Blake. Blake paired them together because he views them both as big, soulful singers. Kathrina can’t believe she will be working with Kelly. She tells her she has every single one of her albums. Kathrina will sing “Girl on Fire” by Alicia Keys. She wants to be an R&B artist and thinks this song will show her range. Kelly is blown away by her performance during the rehearsal. Big things differently come in small packages.

Keisha will sing “I Hope You Dance” by Lee Ann Womack. She wants to break into the country market and having Blake on her side has given her the courage she needs to do it. Kathrina sings first and does a great job. Keisha also does a wonderful job. Jennifer tells Blake that his pick really depends on which way he wants to go. Does he want to dance or be on fire? He jokes that when he dances it looks like he is on fire. Adam thinks both singers should be proud of their performance regardless of the outcome of Blake’s choice tonight. Blake keeps Keisha on his team and Kathrina is sent home.

For Team Adam, Dylan Gerard and Jon Mero went head to head. Jon sang “Blame it on the Boogie” and Dylan’s performance was not shown. Adam moved Jon on to the next round of the competition. Miley’s second knockout pairing of the night is Moriah Formica and Whitney Fenimore. She put them together because they both are rock performers and she wants a well-rounded team. Moriah can’t believe she will be working with Kelly because she has decided to sing “Behind These Hazel Eyes” by Kelly Clarkson. Kelly encourages her to be vulnerable during her performance and Miley wants her to be more confident.

Whitney will sing “Calling All Angels” by Train. She has struggled with anxiety and depression and music helped her get her focus back. Moriah makes the song her own and makes all the changes that were suggested by Miley and Kelly. Whitney destroys the song and Adam is so sad that one of the two will be sent home. Blake loved the clarity of Whitney’s voice but he would have to go with Moriah. Jennifer would also go with Moriah. Miley’s decides that Moriah is the winner of this knockout.

The last pairing of the night is Adam Pearce versus Emily Luther from Team Adam. He views both singers as rock stars. Adam plans to sing “Smoke on the Water” by Deep Purple. He picked this song because he just wants to be pure Rock N Roll. Emily will sing “Glitter in the Air” by Pink. Watching Adam rehearse has pushed her to want to go deeper. She feels like working with Adam Levine has pushed her to be her very best. Kelly wants Emily to feel the song as she sings. Adam surprises the judges with the final note of the song and they love it. Emily gives an incredible performance. Blake thinks Emily won the knockout. Jennifer loved Adam’s last note and would pick him as the winner. Adam Levine is torn but decides Emily wins the knockout. Miley immediately steals Adam from her team.