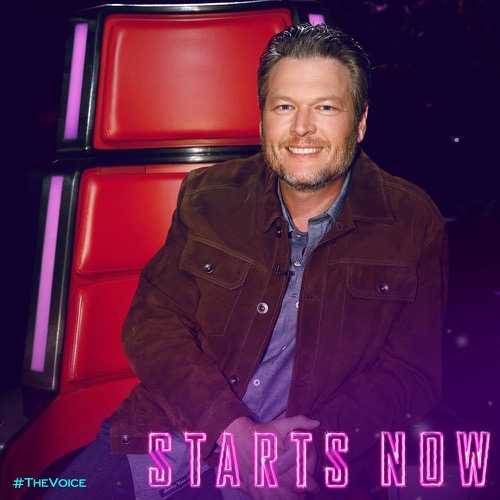 Tonight on NBC’s Emmy Award-winning musical competition The Voice airs with an all-new Wednesday, December 11, 2017, season 13 episode 24 and we have your The Voice recap right below.  On tonight’s The Voice season 13 episode 24, “Live Top 8 Performances” as per the NBC synopsis, “The top 8 artists perform; and the artists team up for competitive mashup duets.”

Tonight on The Voice, we are live on NBC as coaches Adam Levine, Miley Cyrus, Jennifer Hudson and Blake Shelton take their seats. Host Carson Daly informs us that 8 semi-finalists will perform twice, once by themselves, and pairing up with each other in a special duet; both performances are eligible for votes as tomorrow night is the biggest elimination of the season with only four artists will move on! Carson sends a shout out to the brave men and women fighting the wildfires right there in California; as the applause dies down, the night is kicking off with Team Adam’s country artist, Adam Cunningham.

Adam Cunningham sings “I’m Already There” by Lonestar. He wants to connect with the audience more than making the big notes. Adam L. feels he has shown he is resilient and really believes he can be in the finale. All four coaches are on their feet. Blake: I love that song, great song choice and I am so glad you are choosing your own songs. I can tell that lyric means something to you and so many out there, you sang the hell out of that. Adam: That is as good a response I will ever get from Blake I will ever get from your performance. He wants to hate everything I do. Adam, you have been an amazing surprise and continue to have your back against the wall and not only make it through but continue to compel people. Look at you now. In my opinion, belong in the finale.

The first duet of the night is up, Chloe Kohanski (Team Blake) and Noah Mac (Team Jennifer). They sing “Wicked Games” by Chris Isaak.

Davon Fleming from Team Jennifer is up next, he sings “Gravity” by John Mayer. Jennifer reminds him that sometimes when you simplify things and people will understand it; feel things and people will appreciate it. Carson comments that he is shocked Jhud still has her shoes on. Adam: WHAT!? I’ve always loved you and had an ability that was unlike anything I have ever heard, and if I was critical of you it was because I wanted to feel more in general. You scaled it back tonight and the result was people felt you the way I wanted them to. Beautiful song choice. Jennifer: We felt you tonight! What you just did, I can’t coach you to do that. I can’t sit here and lie and say I did; that was all you. You’re belief in yourself. Your passion, your journey and your heart and it came through tonight. I couldn’t even begin to take off my shoe because I couldn’t even move because before I knew it I was standing up in the midst of it all.

Red Marlow is up from Team Blake next. He is set to sing Vince Gill’s “Go Rest High on That Mountain.” Blake advises him to put as much about what is going on in his head and heart into his voice, as it is such an emotional song already. Carson comments that this is the first time that he has performed without the guitar. Miley: When you were just singing, you represent truth; that is why you are here, you didn’t have the guitar and you let us feel you. It was a great performance. Blake: I don’t have to sit here and brag on you, because every country music fan out there realizes what you just did for country music and how you represented that song. I know Vince Gill is sitting back somewhere right now with a huge grin on his face.

The next duet is up and it is two powerhouses Brooke Simpson (Team Miley) and Davon Fleming (Team Jennifer), they are singing “Earned It” by The Weeknd.

Keisha Renee from Team Blake is up, and back into the country lane, she wants to be in. She sings “What Hurts the Most” by Rascal Flatts. Blake says she will be popular because they bring in very contemporary sounds to country music, allowing soulful voices like Keisha to make it in the country. He reminds her that there is no one left that can do what she can do; so she needs to let her voice ring out. Jennifer and Blake are on their feet after her performance. Miley: She loves that Keisha is doing it her way. She is proud and happy for her doing it her own way. Blake: I’ve known Gary Levox a long time, and right now I am sure back home he is saying he should have been singing it that way the whole time. Keisha, I don’t know what else you could have done tonight to get yourself into the final four.

Two country singers Adam Cunningham (Team Adam) and Red Marlow (Team Blake) are up next for their duet; they reveal they have been roommates since they arrived and have a deep respect for each other. They perform “Can’t You See?” by Marshall Tucker Band. The audience erupts after the powerhouse performance.

Straight away we have another artist up. Chloe Kohanski from Team Blake sings “I Want to Know What Love Is” by Foreigner. Blake reminds her it is okay to be emotional as people fell in love with her voice, and if she came on the radio, they would know it was Chloe. Blake is proudly clapping on his feet. Blake: I want to go on record right now, this is the biggest night you have had on this show thus far. This is your best performance so far, and encourages America to rewind and listen again to that performance, and say that isn’t the most iconic voice The Voice ever had.

The next duet is Addison Agen (Team Adam) and Keisha Renee (Team Blake) who sing “Are You Strong Enough to be My Man?” by Sheryl Crow.

Noah Mac is up to perform from Team Jennifer, he plans to amp it up a bit; going back to the beginning of the show a little bit. He feels its important to show the energy he had at the beginning. She says she feels the energy and is right in it, reminding him to grip the melody off the top but it doesn’t have to be perfect and needs to allow the music to move him. He sings “River” by Bishop Briggs.” Miley: I think at the end of this crazy journey, every performance you will be proud of. You created an amazing story for yourself and people know who you are and you should be proud. Jennifer: Mama Hud is very proud, right along with your mama. I don’t know what to say, the way you command the stage and believe in yourself.. that is what Team Jhud is all about. You made me forget this is a competition and made it feel like this was your show!

Team Adam’s Addison Agen is set to perform next. She sings “Both Sides” by Jon Mitchell. She finds that Joni Mitchell is inspiring. Adam reminds her to take her time, as the song is emphatic but also laid back. He suggests for her to have a lot of off-white and the orchestra surrounding her. Blake: I am a fan of yours. I appreciate you being the flagship person, for teenagers and young women and singer/songwriter torch you are carrying, you are so beyond your years. It is unbelievable.

Adam: Hi. This is the time I am usually so competitive but you have changed the way I view the game. Addison, you are an artist and I’d rather, you sing a song that means the most to you, the songs that have an impact on your fans. I want to set you up for the best possible career you can have. This girl IS the Voice!! You are one of the most special gifts that I have had the pleasure of working with and I love you.

Team Miley’s only artist, Brooke Simpson puts everything on the line, singing “Faithfully” by Journey. Miley wants people to freak out that she is doing their favorite Journey song. Brooke says the lyrics are so relevant for the position her and her family is in right now. Miley wants the performance to focus solely on her vocals. Jennifer looks at her in utter shock. Miley: Brooke, we almost burnt the house down on purpose with Brooke’s vocals; if you are not in the finale than I don’t know what this show is about.