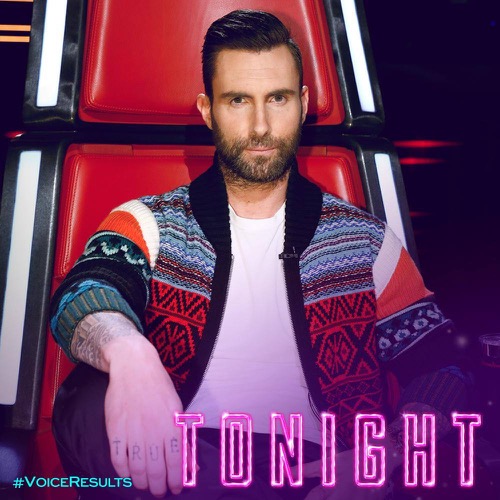 The show opens with the coaches taking the stage as Carson Daly reminds the home viewers that it is elimination night. Blake Shelton has reminded his team that it the time to swing for the fence. They need to not leaving anything on the table. It is go big or go home tonight. Jennifer Hudson thinks her two remaining performers are not only great singers but also great people. Miley Cyrus knows that her remaining singer has a future as a performer regardless of how the Voice plays out. Adam Levine can’t believe what he has seen from him last two singers and can’t what to see what will happen tonight.

The top eight contestants take the stage and Carson announces that Chloe Kohanski will move on to the finals, for 12 of the last 13 seasons Blake as had a singer in the finals. The X Ambassadors, Machine Gun Kelly and Bebe singing “Home”. Last season’s winner, Chris Blue is profile, showing what he has been up to since he won the show. He has been recording his album and working Alicia Keys. He will perform next week during the finale. Carson brings out the seven remaining semi-finalists and announces that Addison Agen will be moving on to the finales. Team Adam has had a finalist in 11 of the last 13 seasons.

Jennifer Hudson premieres her new single, “Burning Down”. Carson welcomes the remaining six artists back to center stage and tells the viewers that Brooke Simpson is the next contestant to move on to the finals. This is the first time a performer from Team Miley has made it to the finals and she is thrilled. A clip from the new movie “The Greatest Showman” is played. Hugh Jackson and Zac Efron both star in the film and provide commentary about the new movie which will be in theaters December 20.

Carson announces that for the first time ever several Voice artists will take up residency in Las Vegas at the Hard Rock Café and perform in the Spring. The singers are Chris Mann, Michael Sanchez, Alicia Porter, Mathew Schuller, Mary Sarah and others. They perform a preview of the show and the crowd loves it. The last five semi-finals return once again to the stage. There is only one spot left in the finals. The top three artists will sing tonight for the last instant save. They are Adam Cunningham from Team Adam, Noah Mac from Team Jennifer and Red Marlow from Team Blake. Keisha Renee and Deven Fleming will be leaving right now.
America will vote tonight with the instant save to send the last singer to next week’s finals. Red Marlow is first up and performs “Dixieland Delight.” Blake thought Red deserves to be in the finals and asks the fans at home to keep him in the game. Adam Cunningham is next up and sings “Calls Someone Who Cares.” Adam thinks Adam is the comeback story and is so talented he deserves a shot at the final. The last performance of the night comes from Noah Mac singing “Sign of the Times.” Jennifer was blown away by his passion. Carson tells the home viewers how to tweet to keep one of these singers on the show. The final performer moving on the next week’s finale is Red Marlow.