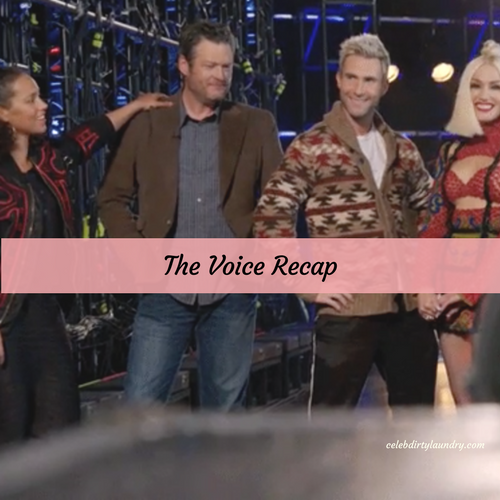 Tonight on NBC’s Emmy Award-winning musical competition The Voice premieres with an all new Monday, March 27, 2017, season 12 episode 11 and we have your The Voice recap right below.  On tonight’s The Voice season 12 episode 11 “Battles, Part 3” as per the NBC synopsis, “The battle round continues with advisers Luke Bryan, Celine Dion, DJ Khaled and John Legend. Included: Alicia Keys and DJ Khaled create unprecedented battle arrangements and Adam Levine shows tough love to bring out the best in two artists.”

The Battle to be named the Voice continued on tonight’s all new episode however, the judges were running out of their “steals”.

Unfortunately, Alicia had already used up her two steals and so both Gwen and Blake had one left though Adam turned out to be the luckiest when he began the night with both of his steals still intact. So talent was definitely up for grabs and Blake for one had wanted to shine a light on his artists. Blake had apparently chosen “In The Midnight Hour” for Josh Hoyer and TSoul because he thought that would be more familiar to them with the type of music they normally perform. But Blake and tonight’s special mentor Luke Bryan had found a few things they had wanted to tweak.

The guys had listened to Josh and TSoul play several times. However, they tended to find TSoul’s voice just a little bit weaker than his opponent. They had thought that TSoul was trying to force himself to commit to the higher notes like Josh does yet that was making TSoul’s voice sound much weaker than necessary. So TSoul had needed to regain some confidence before the battle and towards the end of practice his voice slowly became stronger. And so Black and Luke had hoped that TSoul would maintain that.

Though they needn’t have bothered be worried about TSoul. He had managed to bring out his best for the battle and it had been a pretty hard one between him and Josh. Both stars pulled out everything to stay, but in the end they were left on equal footing. Josh Hoyer and TSoul had performed really well together and they each had a certain amount of stage presence that escalated their performances to a whole new level. So all the judges had been wowed by what they had seen and that had made Blake’s decision even harder.

Blake hadn’t wanted to choose between the men however their performance had told what he needed to know and that was TSoul could bring more to the stage than Josh. So Blake had been forced to let Josh go despite liking him and TSoul got to stay a whole new round. Yet, the competition continued and up next was Autumn Turner vs. Vanessa Ferguson. Both women were part of Alicia’s team and she had enjoyed finding their range during practice so she had wanted to give them an interesting song.

Alicia and tonight’s celebrity mentor DJ Khalid had decided on “Killing Me Softly” for Vanessa and Autumn. But the song was challenging. The women had to know when to hit those high notes and when to sing a little softer than usual. So Alicia had had them practice several times with the band and had even rearranged some of the band music to have it more in tune with the ladies yet each woman had her own distinctive voice and the judges would later comment on that when both women battled it out.

Vanessa and Autumn were great together. They knew how to complement each other voices and that did lend itself to a great performance. However, Alicia found that she preferred Vanessa over Autumn. She said that in the beginning Vanessa had a New York vibe in which she didn’t want to let anyone become too close, but that Vanessa changed when she was up on the stage and she had allowed the audience in for the first time. So Alicia ultimately went with Vanessa because of the way she had improved over the last couple of weeks.

Though Autumn had also improved and that was something several of the judges had seen for themselves. So Autumn was presented with a double steal. Both Adam and Gwen had wanted her on their team and so she had been given a chance to stay on in the competition however choosing between Gwen and Adam wasn’t an easy a decision. They both offered to work with her and she knew that they each would make a great a mentor. And therefore that she had to go with the artist she felt could bring her the furthest in the competition.

So Autumn went over to Adam’s team. She had liked Gwen though she had more faith in Adam. Adam was also a strict taskmaster and he knew had to draw out his artists’ strengths. Yet, Johnny Hayes and Julien Martinez had gone up next and Adam had had a lot on his plate with the two of them. Both Johnny and Julien were talented and they had a certain raspy/powerful voice so Adam gave them a song that required them to pull back some. He gave them “Hard to Handle” and funnily enough the song was hard to handle.

The song required both men to pull back on the range they could normally reach and they found holding themselves back was much harder than giving the song all they needed. So Adam and tonight’s celebrity mentor John Legend had tried to teach the guys how to sing the song yet they had kept running into the same problem which was both Johnny and Julien going too overboard. And it as almost as if they didn’t know how to control their range during practice so Adam hadn’t known what to suspect when the two battled it out.

Only the performance later turned out to be more one-sided. Johnny and Julien had both been on the stage, but really all eyes were on Johnny who had put a little more umf into his performance. So Julien had sort floundered. He had still sounded great like always and he could have won against someone else. However, Julien barely existed when he was next to Johnny and so the judges had all pretty much chosen Johnny as the winner. They said that he had been electric on stage and that they hadn’t noticed Julien as much.

So Adam went with public opinion. He chose Johnny over Julien and Julien was sadly eliminated on tonight’s episode. Though up next were Stephanie Rice and Caroline Sky. The two women were part of Gwen’s team and she had decided to give them “The First Cut is the Deepest” because she felt that both of them would be able to bring out the story behind the song. And to help her with the ladies during practice, Gwen had tonight’s celebrity mentor Celine Dion. Celine had a voice like no other and the ladies had sort of fanned out when they realized they were going to be working with her.

Yet, Celine had taught them an important lesson. She had taught them how to channel some of their emotions into their music and that had come out when the two ladies battled for their chance to stay. So Gwen had been faced with a tough decision when all was said and done. She had liked the rocker edge that Stephanie could bring and she had also liked how Caroline could sing softly then suddenly shred it out of nowhere though she could only choose one and so she chose to keep Stephanie. And had gotten lucky when Blake chose to steal Caroline.

Blake had liked Caroline’s range and he thought that she might need more direction. But she had had too much talent to let go so Blake had played his last remaining steal to keep her however Adam whose team had suffered some setbacks earlier had faced another problem with Kawan DeBose and Malik Davage. The guys were up next and they unfortunately struggled all throughout practice because it was like they weren’t taking the competition seriously. They had been given “Love Me Now” and had even had John Legend to help them with the song. And so they should have been on point and just weren’t.

The guys struggled with remembering the lyrics and coordinating their harmonies. However, they continued to get worse after the first day and neither John nor Adam knew what to do about it. They had tried telling Kawan and Malik that they had to get the song right in order to stay on in the competition and that hadn’t changed a single thing. So the guys were regressing right before Adam’s very own eyes and they hadn’t exactly put themselves together when it came to battle it out. The two were great individually yet the song didn’t come together until the middle because they had tried to perform against each other rather than with each other.

So the competitive spirit almost ruined a John Legend song. Though the guys were able to highlight their own strengths and that had left the judges split. Blake for example had preferred Kawan because of the range he had heard in the other man’s voice, but Gwen had preferred Malik because she felt he had more of a stage presence than Kawan. So Adam had listened to what his fellow judges had to say and then had decided to go with Malik. Malik was slowly coming into his own and Adam didn’t think Malik should go home just yet.

But Hunter Plake and Jack Cassidy were up next and the two guys had also had a few problems during practice. Jack apparently had the stronger voice and so Alicia had wanted to see him unleash that instead of restraining himself. So Alicia and DJ Khalid had advised Jack to give the higher notes his all however they also had to help Hunter along. Hunter’s voice wasn’t as strong as Jack and he could easily be turned into a backup singer if he didn’t learn how to pick his “moment” on the stage. And so “Dancing On My Own” was the perfect choice for them.

The song allowed for Jack to hit those higher notes though it also allowed Hunter to shine when he later added those tender/softer moments to the song. However, what made the performance great was the combination of both voices. The guys were friends off the stage and that showed because they weren’t trying to outdo each other on stage. So afterwards Hunter had managed to impress the judges that hadn’t thought he had it in him. And so when Alicia chose Jack, both Adam and Gwen attempted to steal Hunter.

And he decided to go with Gwen!